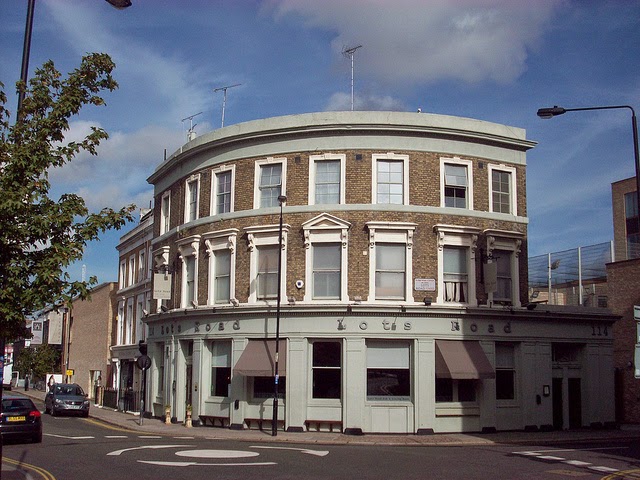 I was thinking about how life sometimes becomes a series of routines. At this point in my own life, I can probably tell you where I will be at any given hour of any given week. It’s all pinned down quite tight.

What’s more, it sometimes seems that this particular routine that I’m currently in may never-ever change again.

But that’s not right, is it? Everything changes.

If you could look back twenty or thirty years, you would quickly see that the routines of that time also seemed permanent and unchangeable yet they were probably completely and utterly different to the routines of today. No matter how embedded some things seem, they inevitably change.

They all change, over time.

This ‘Routine’ train-of-thought of mine got me into glancing back to my Lots Road days. This is the Lots Road just off the New Kings Road in London, you know the place. Antique auction rooms, huge power station, access into Chelsea Wharf. That one.

It was such a great time. I was working with a great bunch of people and we grafted hard and managed to have loads of fun too. It was a routine but it was a good one and, of course, it was a completely different routine to the one I live now. Worlds apart.

One of the best things of the Lots Road Routine was what happened every Friday at 5.30pm. We stopped work and we decamped to the pub on the corner, “The Ferret and Firkin”.

We drifted down there in the current of a colossal ‘Friday Feeling’. Pints of Murphys Stout were ordered (cos the Guinness wasn’t quite up to Irish quality) and, in my case, a huge brown cheese roll was procured as I was never much of a drinker and the roll gave me the small advantage of a little ‘soakage’.

We would just chat then. Laugh and joke and have fun. I would achieve a thirty minute period, about one-and-a-half pints of Murphy’s in, where I was really sharp and fast and funny. I loved that window of opportunity. Then pint number three would arrive from somewhere and the moment was past and it was time for a shuffle down to Fulham Broadway Station and a fuzzy, pleasant ride home on the District Line.

It was the best of times.

I took a virtual stroll down Lots Road via Google Maps a few weeks ago. As with most places, nothing much has changed and yet everything has changed. Cliff Road Studios is still there though it’s a different colour and it looks a bit different from the street. The Ferret and Ferkin is obviously no more either.

It’s funny, though, isn’t it? Whenever I say ‘the best of times’ that other part of the phrase will soon crop up in my head too.

‘The worst of times’.

If I focus on it a little harder than I am inclined to, I can soon see that those Lots Road times were not simply the best of times, they were indeed the worst of times too. In among all the fondly-remembered fun and hard work, there were quite a few awful things. Stress things and pain things and things that can hardly even be written down or spoken out loud.

But that’s what we do with the past, isn’t it? We glance swiftly over our shoulder at it as we rush away from it, mostly choosing to see only what we want to see. We look quickly away again before the detail can coalesce and become too gritty.

Perhaps Lots Road was aptly named. Perhaps, like Lots wife, if I were to stand still now and look back at it for too long, it might turn me to salt.

Ken, this is lovely and completely True. It resonates on all sorts of levels.

It was your line on being sharp after one and a half pints that really got me though - I have exactly this when playing pool. One and a half in, I can make any shot. Once the third pint's down, it's time to go home.

Change is an odd thing. We never notice our kids grow up and then suddenly they’re all grown and we wonder when the hell that happened. Friends turn up periodically, or we run into them in the street because it’s been years since we had anyone round and when did we stop doing that? and they say, “Isn’t your such-and-such getting big?” And you think, Er, no. And then you take a step back and realise, Christ, they are! When did all that happen? We drift through life mostly and although drifting feels like not moving suddenly we realise the tide’s turned and we’re two miles out to sea with nothing between us and several thousand feet of ocean bar a fluorescent green lilo. I didn’t plan to be where I am today. I just sort of ended up here. Not that I hate here. Here’s okay. Most of my heres have been okay although once or twice I have bailed on them.

I’ve also done the Google Earth thing, visited places I used to live, ‘driven’ round my old stomping grounds. Mostly it makes me sad. It doesn’t take much to make me sad but dwelling on the past is pretty much guaranteed to do it. Even the best of times make me sad. Thankfully I’m not one who dwells on the past. Are there times I’d like to return to and live through again? Of course. The last job I had, the very last job before I decided I couldn’t do it anymore, was in the head office of some bank. I forget the name of the bank but I do remember the office. It was a proper office and all I had to do was sit at a desk and shuffle paper and I loved the place. The job didn’t impress me and the reason I lost it was I kept thinking of ways of improving what they were doing and I guess they liked doing things the way they were doing them and didn’t see why they should change. But for the couple of weeks I was there I was back where I was a version of me that I’d enjoyed being. It’s why I like my office because it is an office, a proper office. I read recently—of course I’ve forgotten where but I think it was a true story—of a guy who when he retired hated it so much that he turned one of the rooms in his house into a replica of his work office and started sending himself letters with work to do. Actually maybe it was fiction. Some French author. Doesn’t matter. Maybe it was They Cherry Picker. That rings bells. Amazing what my mind dredges up. (What I would give for a fully-functioning memory.) It’s sad but I can relate.

Never been a big one one for pubs. I’ve been in enough over the years but mostly I don’t enjoy the ambience. They’re noisy, boisterous places and I can never hear what people are talking about. Plus I don’t like drink. I like the idea of drink but I can’t hold my liquor. Two pints of lager and I’m anyone’s; three and I’m no one’s. So I don’t bother. I pretty much quit drinking in my early twenties. I won’t say I’ve never touched a pint since then and I’ve even been drunk a few times since then but these were the exceptions rather than my norm. How some writers can work while drunk I’ve no idea. I find writing when sober hard enough. I do have a few happy memories associated with pubs though. And even one in a club although I can count on the fingers of one hand how many clubs I’ve been to. The one I’m thinking of was the day my sister got married the first time and my brother and I ended up in a club with her two bridesmaids one of whom was dressed in a tux I seem to remember. The other’s now a famous TV actress who shall remain nameless but is a lot shorter in real life than she looks on TV; tiny she is. That was a fun night. We all flirted and somehow it managed not to go pear-shaped as so often happens when libidos get topped up with alcohol.

Hi Ken, you got nostalgia nailed here. There's no bigger culprit than me when it comes to wallowing in times past.It happens us all ,when life seems tough that little switch flicks in your head, 'Remember when what's going on now
in your life, didn't ? Then regret
sets in ' Had I but known syndrome'
I have cured my dependencies on the'Nostalgia crutch' as you said even in those Hallowed times , there were also sad .tough times, which of course we gloss over in our search for contentment, in our present situation.My ethos now, Ilive for today, the challenge not to let life grind you down, just keep punching, hard at times but rewarding in it's own way when you emerge from whatever predicament life has thrown at you battered ,bruised, but victorious, cos you're still fighting. I still love nostalgia old times and memories, but now they make me smile more cos I accept, these silver linings hid clouds too.
Keep well Ken
GH

Thanks Gavin. The 'pint and a half' moment is, for me, one of life's great drinking truisms. It's right up there with 'you're twice as drunk when you go into a toilet cubicle and shut the door'. :)

Hi Jim, I must be annoying, these days, looking backward as much as I do. I do it in weeks where the week doesn't seem to offer a useful subject for a blog post. That seems to be happening more and more. Thanks, as ever, for valued comments.

Hey G: 'Live for Today' is a good ethos. Stick with that... as well as the occasional backward glance. thanks K

As ever, this is such a good blog post. Can identify whole-heartedly with visiting places, either virtually or in real life, that geographically store huge chunks of our lives. And yes ... we do tend to put a gloss on them. I can easily remember some of the very best times of my life and, if I'm sensible (which most of the time I am NOT)I leave my thoughts there because, with the benefit of hindsight, some of the best times caused some of the worst times. Often it's best to leave the past in an unmarked grave.