The Newsroom – A Review 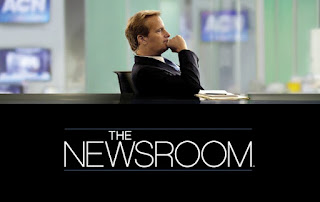 I have developed something of a penchant.

No, not a paunch, a penchant.

I seem to be drawn to only review things that divide opinion. If everybody loves it, I’m happy for them but don’t want to add to the clamour. If everybody hates it, well, why add to all that pain?  But split an audience up - sorry -  down the middle and I’m in. I’m ‘so’ in.

I’ve done this a few times before and I’m always on the lookout to do it again. Then along came The Newsroom, which I’ve just finished watching (Series One, if you’re reading this in the future).  An audience divided, some loved it, some hated it.  Ken wades in.

I have another part to this penchant of mine.

Whenever I review one of these movies/books/TV Series’ which seem to divide the world, I always come down on the same side.  I always seem to love ‘em. This time will be no different.

Lots of people don’t like The Newsroom. I get that. I get it mostly from Social Media and a little from reviews as well. Some people who I respect don’t like it. I respect their views and their views often make me look at my own views a little harder. Sometimes they even change my mind, it’s not that hard to do.  Having just finished Series One, I’m going to stick with liking this one though.

My main reason for this is one which it has taken me many years to formulate and decide upon. It is simply this; I like it because I do. There is a tendency to like things for odd reasons - because we are told to like them, because we expect to like them, because we think it might be cool to like them, to endear ourselves to someone you know who already likes them. It’s all tosh. Look into your own mind when you’re watching something. Are you liking it? If the answer is ‘yes’ then that’s good enough.

But of course that’s not good enough for me, not in this instance. I mean, I’m setting out to write a little review of The Newsroom so for me to say ‘I like it ‘cos I like it’ well… it’s not going to live up to the billing, is it?

So here’s the science.

The Newsroom was right up my street from the start. It was fast and clever, funny and sweet, it wasn’t afraid to have a moral compass and the actors in it were convincing and attractive and good. Each week, it was one of the few things I looked forward to on telly. In episode one, there was one particular moment when it completely won me over. Up until half-way through, the drama and wit and fun all existed in some TV drama non-space, the kind of thing we are sub-consciously accustomed to, but then, out of the blue, something different happened. The drama suddenly got ‘placed’ firmly in space and time as a real life news story unfolded before the character’s – and our own – eyes. This was a ‘goosebump moment’ for me and telly drama doesn’t manage that too often anymore.

I was hooked and the series could largely do no wrong for me after that.

I do have my reservations. Nothing gets liked 100% or hated 100%. The Emily Mortimer character is one of my reservations. Not Emily herself, I hasten to add, I love her as an actor and have done since she starred in Andrea Gibb’s ‘Dear Frankie’ and also in ‘Lars and the Real Girl’. It’s just that her character was introduced to us as a dynamite news person who reported from the world’s hottest zones and who never compromised but yet she has shaped up more as a slightly dizzy romantic foil for the Jeff Daniels character and she seems defined mostly by neediness and slight hysteria.

Perhaps Sorkin is better with guys that with gals, I don’t know, perhaps that explains some of the people who didn’t like ‘The Newsroom’.

It’s also easy enough to explain another section of the viewing populace who didn’t like the show. Sorkin has pulled another whammy on the Republican Party and I could see how they might not be too happy about it. Back in the day, The West Wing was a Democratic Wet Dream extended over seven series. This time, by making the central character a moderate Republican, some might have felt that the new series might start to redress the balance. Not really. Will McAvoy doesn’t take long to reveal his disillusionment with his party and this opens the door to some fine, old-fashioned, Sorkin diatribes on the subject.  Being from Ireland and blissfully removed from the United States Political System, I can sit back and enjoy this stuff and I do. However I could see how people more deeply embedded in that world may see Sorkin’s set-up of a room full of bright intelligent people all busily dismantling the Republican (and most particularly the ‘Tea Party’) agenda as something of a whitewash.

I can have sympathy with these groups of people and why they may not like The Newsroom so very much.

But there is one group of people who I simply have to disagree with. It’s those people who don’t like the show because it defies belief, because it is not convincing, because it’s not real.

To those people I have to say this.

Of course it’s not real.

To my mind, Aaron Sorkin has always written Fantasies. Always. He hides it well, he dresses them up in solid contemporary characters and situations but, the fact remains, they are still fantasies. Go back as far as ‘A Few Good Men’. Even I, as a Sorkin fan boy, could never buy into the underlying fantasy of that one. That a youthful lawyer could bring the edifice of Jack Nicholson down simply by making him lose his temper. Jack Nicholson would have chewed him up, spat him out, and gone to his sister’s for dinner. It was fantasy, pure fantasy.

And, quite often, these fantasies are recognisable. The West Wing was Kennedy’s vision of Camelot brought back to life.  The Newsroom, as it admits to itself over and over, is Don Quixote with the heroes on a mission to revive journalistic integrity instead of chivalry and tilting at every windmill that they meet along the way.

Any doubt that The Newsroom is Sorkin’s purest fantasy to date can be swept away by that scene in the final episode involving a certain bus on the streets of New York City. No spoilers here but the million-to-one co-incidence that lies in the heart of that scene is the final proof that Sorkin is not looking to play any realism game here. In fact he is delighting in a heady brew of tragic real-life all mixed-up with utter fairytale schmaltz.

ok, so not being a "television watcher" (I don't own one) I haven't really heard about The Newsroom, until reading this post. It sounds interesting, and worth watching!

I am now going to get my hands on series one and watch it!

Ah. So much I could say in reply about this (brilliant) show. (No prizes for guessing which side I'm on...)

I'll try to keep it brief.
I agree with everything. And right at the core of that agreement is because this show has managed to do something that television doesn't really do anymore. It demands 100% attention.

The West Wing is my all time favourite TV show. I was put off a bit by the Newsroom reviews but will definitely give it a go when it comes out on DVD so thanks for this blog. nb I prefer to watch these things on DVD (I can't be doing with having to wait a whole week to see what happens next!)

Emily Mortimer was much better in Dear Frankie. In the end, maybe that was why I stopped watching this.

I mean, ultimately, I stopped because I just wasn't enjoying it but her character and how she is, how she's treated, it didn't work for me.

Great review of a great show Ken. Although there are some cringeworthy moments (most involving the ever so lovely Mackenzie McHale and the predictable love story) the newsroom is great TV. It also educates the viewer, giving an insightful look into American politics and media.Of course Sorkin sets himself up for arguments he is going to win, and obviously there is a left wing bias, the show is practically anti-Republican. But it is entertaining. Great to see it get some well deserved praise, finally. Like you, I too will be looking forward to season 2.