Why I Haven’t Ever Gone Back 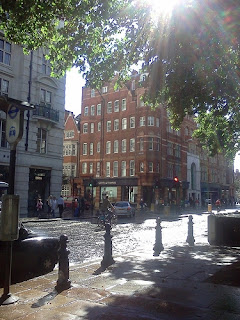 Over the years, I’ve written quite a few posts rhapsodising about my time in London. How I had a great fourteen years there, how I left in 1997, and how I’ve never ever been back since.  Posts like this one here or this one over here.

The most recent of these posts, just a few weeks ago, sparked a question which has been repeated to me quite a few times. In a word, the question was ‘Why?’ If I loved it so much, why have I never gone back to London in all this time?

It’s a good question. Particularly when I tell you that my wife has been over and back to London every year since we left. A good question and I should try to answer it but, I have to confess, as I set out to type this post, I don’t really know what that answer will be.

One thing is for sure, when I drove up the M1 in February ’97, with my car jammed full of stuff, I never dreamed that I wouldn’t be seeing London again in the next fifteen years. As it turned out, it was a somewhat unseemly departure from UK shores as my engine threw its big end somewhere up around Colwyn Bay and I had to enlist the AA to tow me to the ferry at Holyhead and then off again on the other side. Not at all what I had expected. Anyway, I made it back to Ireland and, as I’ve said, I’ve never ever gone back.

I don’t tend to do things for myself. I mean, I don’t tend to treat myself. Going to London would involve organising a treat for myself and I’m slow to do that kind of thing. It’s something that has grown in my mentality over the years and it’s a trend I find quite hard to buck. Someone, in recent, years, actually paid for a ticket for me to go to London (if you’re reading, you know who you are and thanks again for the lovely thought) but there was still too much ‘self-treating’ involved so it all fell by the wayside.

So that’s one possible theory, or maybe more likely a contributing factor.

I get very set in my ways. I get wrapped up in what I have to get done and how I’m going to do it. I never really stop and say, “I know, I’ll do something different in three week’s time and I will plan it now.” I just go on and on and on. That’s why I particularly love Christmas, I think. It’s an allowable ‘stop’. Everybody else stops so I can stop too. It’s hard for me to just say, “I’m going to do London next month.” It just doesn’t come natural to me.

So that’s two reason, right there.

But, having thought about it quite a bit now, here’s what I think is the actual crux of the matter. Going back… it would be like… what? What would if be like, Ken? Okay, it would be like this. Imagine you had a job, imagine you worked in an office for fourteen years and you lived and breathed that office and the people in it became like your family and your friends all rolled into one. The highs, the lows; they were all yours. Every twitch of that office was like it belonged to you. Now, imagine you left that office and, fifteen years later you decided to call back to see everybody. How would that be? People would have changed. It would no longer be your place. You would sit and have a coffee and the overriding impression, behind the politeness of the few people who still faintly remembered you, would be that you are just holding up the show, that you no longer belong here and why on earth did you even come back?

It’s like that, I think. The Big City lives on for me, right here in my head. If I ever go back to London, I fear I may finally lose it.

I realise that I don’t want go back as a tourist or any kind of a casual visitor. I need to go back for a reason, a really good reason. But the years are slipping away now and that good reason is not materialising. I may need to start thinking things out in a different way.

Luckily some things are changing.

There is now a growing imperative in me to go back to London. This imperative tells me to go only for a few days and only as the dreaded ‘casual visitor’ and it is beginning to weigh ever heavier on me. The scales are being re-balanced away from the ‘stay away’ side and noticeably towards ‘go, you fool, while you still can’ side.

This new imperative relates mainly to some of my online friends.

There are some people who I only know through my computer and who I would just like to meet, if only just once, in person.  I don’t want anything serious or earth-shattering from them, I just want to see them for real, shake their hands, and perhaps chat for a little while.  It sounds like nothing terribly important but it actually is. I met one of my online friends for a few hours a few years ago and those were a very fine few hours indeed.

So don’t give up on me yet, London, and don’t send me any offers or vouchers or encouragement to help me on my way. I’ll get there soon enough now, I think, and in my own time.

I’ll get back there.

And it’ll be okay…

Like you I lived & worked in London for many years. I moved to Brighton but continued to visit regularly (in my case as a big opera fan). Gradually though the visits got less & less frequent as I got older. I really believe London is a place for the young (as is Brighton). Feeling anything but young I moved to Yorkshire 10 years ago & I have now become one of those people I mocked so carelessly when young, ie intimidated by the crowds & horrified by the race to get anywhere. Now I can mock those who think life is all about work, rat-race progression, maximum social life etc - really though, the truth is, it hurts that I am no longer involved nor up to it. Going to London now just reminds me of all that I have lost. I love Yorkshire & it is absolutely what I need now & has loads of advantages over London. But - here I am old - there I was young.

I went back once and swore I never would again. Actually I went back twice. The first was to school and the second was to my first job. In each case only a few months had passed but that was enough for everything (and nothing) to change. And that was what got me: there hadn’t been enough time for things to change so why did I feel like such an outsider? After that I became very good at burning bridges, not keeping in touch, letting things die a natural death. That doesn’t mean I don’t suffer from bouts of nostalgia every few years but you can’t go back. I’m with Heraclitus: "You can't step into the same river twice." Cratylus, one of his disciples, went one step further with "You can't step into the same river once" which sounds like nonsense but I think I get it. Life is complex and it takes so much effort to get on with it that we never have any time to step back and assess it until years later. We were never all there and our concept of place has been formed after the fact. All our memories are imagined.

I have not been back home for fourteen years. I took a virtual tour a few weeks back—thank you Google Earth—which was an interesting and surprisingly satisfying experience but I’ve no strong desire to go back. There have been plenty of changes and although I know it’s home it didn’t feel like home. I suppose it’s like seeing a dead relative all made up in their coffin; it looks like them but it’s not them. I never saw either of my parents after they died and my brother said he regretted going to see Mum in the funeral parlour.

I can understand the desire to meet someone who you’ve got to know online in the real world. I suppose it underlines the fact that despite our best efforts we still distrust this medium. I’ve met a few of Carrie’s friends but I can’t say I have any burning need to meet anyone. My fear is that I would disappoint them. I have run into a few in passing so if you’ve any doubts that I’m real drop Marion McCready a note and she’ll tell you I’m nowhere near as grumpy in real life as I pretend to be online and I’m actually quite huggable.

If you ever get round to shaking hands in London, let me know so my hand can be one of them :0) Great read as always Ken.

Hey Ken, I know what you're saying. I'm in London now, but I've had nice memories of a couple of places I've lived in the past. Admittedly, some aren't very far away but even when it would only take around one hour on the train, I still don't go back very often, if at all.

One place is Guildford, which is a mixture of a good and bad memories, but has always been a meeting place for my family. Whenever we meet up, it's lovely to see everyone again, but the place just doesn't feel like it used to. It feels like it's all in the past now, and it would be strange to move back there (although we haven't ruled it out).

Another place is Leatherhead, where I lived from the ages of 2 to 15. A few months before we moved to Australia in 2006, we decided to go there for a day trip (and to visit my Gran). This was the first proper visit in 11 years, and while it wasn't exactly the same, I actually enjoyed it more than I expected.

I think when you live in a town or city, you maybe get a little over-familiar with it. That's how I am now about the bit of London where I work, and the bit where we live. It's not a bad feeling, but if you leave and later go back, it doesn't have to fall short of your expectations. If you're open-minded and don't expect too much, you might be pleasantly surprised :)

That, and London is so vast that you're bound to find something new. I'd love to meet up with you if you do decide to visit.

I left London in 1989 after 13 years & travelled nearly all the way around the world ending up in Bournemouth. I itched to get back to London & here we are back in the Smoke. Not EXACTLY the right postcode but it'll do. If there's a queue to shake your hand when you do get back here, I will join it. It's still the best city in the whole wide world.

Would it help to meet some of your online friends who live a little bit closer...? Cos that might be a good bridging step. Cos I'd make coffee for you and talk to you all day! :)

The pint is always waiting. It can wait for whenever you're ready to drink it.