A Writer All of the Time? 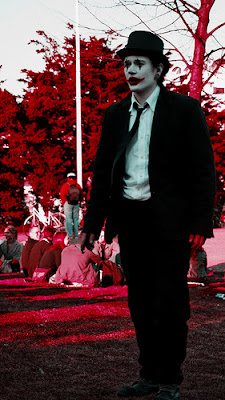 I consider myself to be a writer.

I didn’t arrive at this consideration quickly or easily and certainly not by way of any great success or breakthrough in writing.  I’ve had my moments, I suppose, and I hope to have many more, but they’re not what allows me to (quietly) think of myself as a writer now.

It’s more the state of mind.

I’ve found that I’m happiest when I’m writing and that I’m most content when some good writing has just been done.  I berate myself if a day ever passes without my having written something and my unhappiness increases in direct proportion to every additional hour that passes without getting down to it.  So, yeah, for better or worse, I can think of myself as a writer now.

So… what is it that you want to say, Ken?

It’s not a big deal, really, all I want to say is this:

I have a sort of mistrust of writers who are writers all of the time.

Most writers – the ones I know anyway – are not writers all of the time.  They put enormous time and energy into their writing work and they do it brilliantly but then, in downtime, they are just themselves rather than writers.

I realise I’m not making much sense and possibly causing a bit of annoyance too but it’s a tricky one, this, and I’m just trying to get my head around it.  You might be saying something like, “he’s wrong, the real writer is a writer every minute of every day, constantly questing for the truth and insight of each and every situation that arises.”  Yes, they’re the ones I’m talking about.  They’re the ones that worry me a bit.

Don’t get me wrong.  The sub-conscious level is always working away, it really is.  Some piece of amorphous writing-thought, left alone to ‘stew’ in the back of the mind, can come out so much more sweet-and-tender for the stewing.  I’m not talking about that stuff.  I’m talking about the writers who go around being writers all the time.  I think it’s a confidence thing.  If you have the confidence and the faith in yourself, I think you tend to put on the writer’s mantle when you sit down to write and you are just ‘you’ the rest of the time.

That’s why people are often surprised when they meet writers.  “I thought he’d be all-flowery,” they might say, “I thought he’d offer some marvellous insight into the Human Condition over tea.”  “Instead, all he wanted to do was chat about the Football.”

It’s so natural to not be the writer all of the time.  The similarities in other professions are legion.  Does the Joiner assess every stool he perches on in the Pub, every bookshelf he scans in the Library?  Does the Butcher eye-up every beast in every field he drives past, thinking about how he might carve it up?  No.  Writers become writers when they are writing and they express themselves in a markedly differently way in the writing than they do in the rest of their lives.

I’m doing it now.  You don’t think I talk like this in real-life for Chrissakes?

There are exceptions to everything and sometimes I’m just plain wrong about stuff.  Maybe you are an excellent writer and maybe you do spend every minute of your day in the same mode as you do when you are writing.  Well done, I don’t mean you.  You’re great, you are. Really, great.

I think I’m talking about quite a lot of aspiring writers.  I think there’s a misconception that the way you carry yourself, the way you deal with others, the way you promote your efforts, will be the things that will catapult you into some mythical limelight.

Save all that energy, I would say.  Save it up and spit it all out onto the page when you are alone with your writing weapon-of-choice.

If I’m totally wrong, that’s okay.  We all have to do things our own way and if your way is the way of the constant writer then I wish you well.  But even if I’m only partially right, then there’s still a very useful practical application to my notion.  Simply put, it is this; you won’t do your best writing by walking around and thinking/talking/making faces about it.  It’s when you are closeted in your writing place, faced with the blank paper, the blank screen, that’s when the valuable writing will pour from you.

I just think it’s worth thinking about.  If you aspire to be a writer and are working hard at it.  Put your writing-juice in the place where it counts, which is directly between you and your computer monitor.  Be all-of-your-writer there.  Then go out and be yourself at the riverbank and in the woods and at the cinema and in the shop.  Because it isn’t being a writer abroad in the world that will make you a good writer.  Not in my opinion.  It’s down here, quietly, on the page, that the big work gets done.

I probably haven’t said this right at all.

I’m not really a writer this morning.

I have to get to Tesco before it gets busy.

My Uncle (who was a serious musician) told me no one could be a writer until they were over 40. I think he meant the type of writer who discuss the human condition over tea.

I mistrust people who tell you they are a writer or musician or whatever and then have to do something to prove it to you. That's where the difference seems to be, to me.