One Particular Memory of Snow 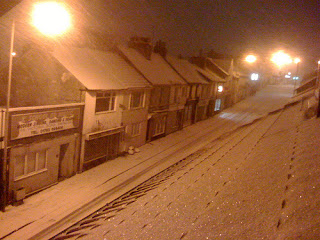 If my computer is anything to go by then England is, this morning, blanketed beneath a silent bed of snow.  Here in Ireland we have no snow at the mo’ – the snow is a no-show. (sorry).

Oddly enough, I think I’d quite like some.  As ever, my novelty with it would only last an hour but that hour might be worth it.  The white, the crispness, the transformed landscape, the sudden re-awareness of the birds in the garden.

Watching everybody tweeting about their snow with excitement/annoyance/joy/pain, I got to thinking about whether I have any particular memories of snow.

I used to go skiing quite a bit, back in the Eighties, so you’d think my snow memories would emanate from there but, no, my most vivid memory was of an evening in my hometown where there was probably no more than an average dusting of the white stuff.

We were sixteen – me and the boys – and we were out drinking.  Well, to say ‘we’ were out drinking was only partially true.  I was the one who didn’t drink.  Never touched a drop until I was twenty.  It’s not that I was particularly pious or anything, perhaps the fact that I worked part time in a bar made me a bit over aware of the vagaries of alcohol… perhaps I was just a boring little bollix – that’s a scenario too.

Anyway, it was Saturday Night and we were all going to ‘Valentino’s’, the night club of choice.  ‘Valentino’s’ was strictly Over 21’s so it wasn’t’ a foregone conclusion that we would get in.  Still everyone always did – except me, of course.  Week after week, just after it first opened its doors, I was turned away from ‘Valentino’s’ while all my mates sidled in.  I guess I was the runt of that particular litter and just that inch too far away from being twenty-one in any imaginable universe.

… eventually, as business tapered off, I too started to be allowed in and that ‘Fire of a Thousand Suns’ thing did not quite work out as planned.

But that’s another story.

I got in.  It was a big thing for me.  No more trudging home alone to watch ‘The Late Late Show’ on telly with my parents.  No more catching up with all the stories the next day.  I got in.

And, hey, it was great.  Loud music, dancing, girls, lights… great.  We had all the hits of the day: Billy Joel, Meat Loaf, Boomtown Rats… fast sets, slow sets.  Oh, and fights, there were great fights too – mighty barnstorming affairs between grown men and their knock-kneed women.  Great stuff altogether.

Yes, drink.  There was drink.

Martin was a good guy, quiet and sensible and funny and nice.  But, on Saturday Nights in ‘Valentino’s’, Martin would ‘get his drink on’ in a big way.  While others danced and cavorted, Martin would sit in the corner, at a paper-tableclothed table, with a long line of flat pints of Smithwicks in front of him and he would slowly and unceasingly work his way through them all before the night was through.

“Ken,” you might well say at this point, “this is all very well but where’s the snow?  Where is the snow?”

It’s two am and ‘Valentino’s’ is over.  Nobody expected snow, it is late February and everything is frozen solid.  It is too cold for snow.  Yet there it is, like a calm surprise, a glistening blanket for the small town grime.

And Martin can usually make his own way home. He is a large boy and he seems to be able to accommodate the vast quantities of beer he consumes, usually.  Tonight, though, he has consumed one too many or perhaps two or three.

We rally round, those of us who have not found a girl, and we resolve to get Martin safely home through the ice and snow.  It’s across town, out of our way, but those were the adventures which defined our teenage years, those occasional sojourns off of the beaten track.

Overcome with Smithwicks, Big Martin soon becomes a largely immovable force.  We cajole him and encourage him and roar at him but his progress is slow, terrible slow.  We arrive at the top of the ‘The Promenade – ‘John F Kennedy Parade’, which is a gently sloping wide paved path along the Garavogue River.  It’s three am now and there’s another hour of ‘Operation Get Martin Home’ to go.  Unless…

“I have an idea,” says Tommy, “let’s get him down on his hunkers and slide him along the promenade.”

It seems like a ludicrous notion but the snow is falling large and sticky and the night is fading fast.

“Martin, Martin, get down on your hunkers and we’ll push you down The Promenade.”

So Martin gets down on his hunkers and we slide him along down the slope, keeping firm hands on his shoulders.”

“Sing a song,” says Tommy, who seems inspired tonight, “sing a song and it will keep your mind off the sickness.”

And this, then, is my one particular memory of snow:

Martin, on his hunkers, easing gracefully off down The Promenade, singing Rod Stewart loudly at the top of his voice,