Trying to Figure Out Why I Was So Disappointed by Tintin 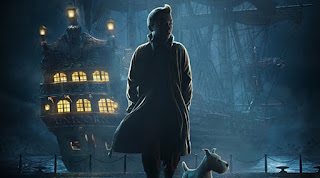 I think it’s fair to say that I’m a lover of movies.

I’ve never in my life started watching a film hoping not to like it.

Often I like films even when everyone else doesn’t.  When films divide audiences right down the middle – half love it, half hate it – films like ‘Sweeney Todd’ or ‘500 Days of Summer’ - you can almost bet that I’ll be over there on the love side, waving my scarf.

So I went to see ‘Tintin’ last week, with my eleven year old son, and we were both expecting to enjoy it lots.  I think he actually did (unless he was just trying to be nice to me) but I didn’t… I didn’t enjoy it at all.  And, in truth, this surprised me a bit.

I knew very little about ‘Tintin’ going in.  I know the character, of course, and I was aware of the support characters from the comic books, but I was never a fan.  I’d leafed through a few of the books from time to time but no more than that.   I think that’s important.  It shows how I wasn’t approaching the new movie adaptation as a devout fan might, who might want to be picking holes, might want to be unhappy.  I just wanted to see a good movie, that’s all.

And, from my point of view at least, I didn’t.  ‘Tintin’ really never got going for me.  I had heard it would deliver thrills, spills and spectacle which could never have been presented without the use of motion-capture technology – I missed that part.  I came out a little more flattened than when I went in whereas, with other big blockbuster entertainment, like the older Indiana Jones ones, for all their technology constraints, I invariably came out buzzed.

The fact is that somewhere, quite early on in the narrative, Tintin lost me and it never got me back.  After that happened the action lost its buzz, the sparkle lost its sparkle and I didn’t care if the ‘mission’ succeeded or failed.  For what it’s worth, I found the nuances of the audience reaction (something I think I am quite sensitive to, as a theatre-writer) were rather dull and flat too.

Although, thinking back on the film now, I remember much to enjoy and to admire.  It was beautifully realised, there was humour and fun in the script and the voice characterisations were top notch.  But here’s an odd thing – I’ve never watched a whole movie, disliked it, and then gone back and changed my mind afterwards.  My first impressions seem to count for quite a lot… with me anyway.

The point of this post is not for me to deride or insult Spielberg’s new film.  I’m honestly a bit troubled.  I'm worried that the movie was actually fine and great and every bit as good as the ones I used to enjoy and that I’ve just got too old and jaded to enjoy this kind of thing anymore.  That’s a sad thought and I don’t want it to be right.

In truth, I don’t think I’m too old to enjoy and old fashioned rip-roaring movie.  I enjoyed ‘Super 8’ immensely and that was only a couple of months ago.

I think the problem is with ‘Heart’.  I think ‘Tintin’ lacks ‘Heart’ and, considering it’s a Spielberg movie, that is rather astonishing.  I know one owes a debt to the source material (and, on that note, did all the noses have to be like that?) but one doesn’t have to be in thrall to it to the detriment of the project.  Perhaps the ‘Tintin’ comicbooks weren't all that big on things like love and friendship, I don't know, but the movie is so devoid of ‘Heart’ that I think, subconsciously, I divorced myself emotionally from it as it progressed.  Tintin, as a character, cares for nothing but the current mission.  There’s ‘Snowy’ but he looks after himself and Tintin seems impervious to any danger the poor pooch might get himself into.  There’s nobody else.  The only woman in the film is the Opera singer… is that right?

Now I don’t need tears and true love and tragedy and little-birds and such.  I just need that drop of blood I was prattling on about here last week.  In all the technological wizardry and faithfulness and spectacle, somebody somewhere forgot to prick their finger and squeeze it into the script.

That’s what I reckon.

So, which is it?  Was the movie as poor as I found it to be or should I just climb into my box, lie down and pull over the lid?

It’s probably a bit of both.

That’s usually the answer to most of these ‘either/or’ questions.

I liked the movie - for a comic book movie I thought it delivered beautifully, though I couldn't say exactly why. perhaps,one of the reasons I liked it so much was because those I went with clearly loved it. I read some of the
books as a child but I'm not overly familiar with them, but my husband and daughter are avid TinTin fans. They have the cartoon collection of TinTin films and watch them often. And they loved the movie. My daughter, 14 years old, laughed from start to finish. My husband grinned from ear to ear. I was impressed with their reactions, but also by the technical wizardry of he films. And I thought it was fun, Snowy especially. Can't wait for the next one!
.

I agree Ken. As a boy I never invested any time in reading the books, so watching the film was a little like trying to get enthusiastic about somebody else's wet dream. I also felt the film needed a few quiet, reflective moments instead of the relentless rollercoaster action. Perhaps the writer and director should switch to de-caf and forsake their triple espresso's. Looking forward to 'The Weekend' which has received many plaudits. If you want to see a film with all its internal organs intact I heartily recommend 'Mary and Max' a beautifully executed examination of growing up and growing old disgracefully. My film of the year.

I'm unlikely to get around to seeing it. Don't seem to be seeing much at the moment so if I have to pick more carefully, I'll not choose a Spielberg movie any more.

Do you remember the fella in Close Encounters who made a model out of mashed potato? He left his family behind as he went pursuing this thing that was drawing him to that mountain and I read Spielberg saying recently that he, Spielberg, could never make that film now because it would be impossible or wrong or something for him to allow the character to leave his family.

The daft get. The whole point was that this thing was so overwhelming that it overwhelmed family ties overwhelmingly. That he cannot or will not see this means, to me, that he will never again allow anything to be overwhelmingly important to the characters in his films.

If they can't be driven to anything, if they can't give a toss, neither can I and he can give me all the spectacle in the world and I will be looking at my watch.

harinthemoon: I'm really glad you all enjoyed it. (That's one vote for me being too old) :)

maybepoet: I'll watch out for Mary and Max. Thanks for your trusted recommendation.

William: I really like this comment very much. I just don't want to give up on SS yet. Warhorse is on the way... here's hoping.

I'm glad I have a girl (who likes action movies about as much as I do... i.e. not much). And I've never shared in the collective Spielberg thing really. On the other hand we watched "Mean Girls" the other day when girl was off sick from school and I laughed and laughed. And then she asked for "The Devil Wears Prada" (for the umpteenth time). You can't beat a bit of Streep!

I've watched quite a lot of films since we got back home and so many of them are average/disappointing and make you think "Jeez what could have been done with that money!" Good films (my idea of good films... a film that does something different somehow) on the other hand do still make it through. I've enjoyed (at home - cinema's still miles away!) "Four Lions", "Burn after Reading", "Waitress", "A mighty heart" and "Inside I'm Dancing" (none for kids though really). Seen any of those?

I never read the books but I was a fan of the TV series in fact I nearly sent a boxed set to one of Carrie's grandchildren one year but decided against it since they'd not appreciated the Joe 90 DVDs. I've seen the trailer and can't say I'm unimpressed with the animation but I also can't say I was bowled over by it either, not in the same way as I was when I saw Jurassic Park for the first time. Strangely though I don't feel any great compulsion to watch this version. Even when I read the reviews of Thunderbirds I still wanted to see it (and hated it) but this really isn't calling out to me. If and when it comes on the box some Xmas I might watch it but I think I can wait.

Couldn't agree more on the lack of heart comment!!
For me that's TOTALLY what the movie missed!
It didn't grab me at all, the characters were flatter than flat despite of the 3D animation, I didn't feel anything, I just underwent it like a zombie.
And I AM a fan of Tintin, both the comix and the cartoon series, so I was expecting to see a new twist on the character but with the heart that's an intricate part of the comic book it's based upon.
Instead I found a total disconnection to all of the characters.
Spielberg tried to make them come to life by making them almost human in the 3D animation, but instead he sorta sucked the life out of them, and made them cardboard cut-outs of the original characters.
I was deeply disappointed, and, judging by the responses of the people around me, I wasn't the only one.
It's a real pity, because normally Spielberg knows EXACTLY how to make characters have a heart, and be lovable, no matter how annoying they are...
So how could he create something that completely lacks any emotion and underlying humanity?
I don't know.
To me it feels a little like he made it betwixt other projects, and that he got bored of it.
And it's a real shame, because it could've, heck it SHOULD'VE been awesomely wonderful!