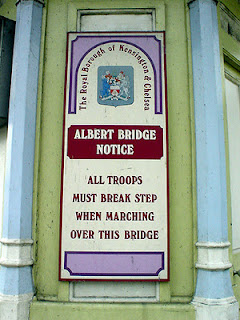 I have a couple of beliefs that I think may be peculiar to me.  They’re peculiar, obviously, but I also think I might be the only one in the world who has them.

Here’s one such belief:

If you’re walking along the street and you happen to meet up with  somebody you don’t know who is walking in the same direction and at the same pace as you then, if you do nothing about it, there is something really wrong with you.

There’s a lot in there, I know.  Allow me to break it down for you.

You’re walking to work.  It’s early and there’s not too many people around.  Suddenly, from out of a garden gate, a guy appears.  He’s got a laptop case and is wearing one of those Jamiroquai hats (this information is just for added-colour).  He falls into step with you and walks alongside.  His pace is the exact same as yours and you’re both going the same way.
You're now walking-buddies along the misty early-morning road…

Sod that!  No, I mean it, sod that!  If this guy hasn’t the wit to know he is invading my space then there’s something wrong with him.  He’s not right.

(Let me remind you that this is a belief which is probably unique to me, I don’t expect you to share it.)

Most of you will probably be saying, “where’s the problem?  He’s walking at the same pace as you and he’s going the same way.  What do you want the poor ill-hatted bugger to do?  Do you want him to wait at his garden gate until you are gone a reasonable distance up the road?”

Well, yes, that’s exactly what I expect him to do.  It’s what I would do.  I don’t want to walk along with some person I don’t know, like we’re a dating couple who just shared a bowl of Honey Nut Cornflakes or something.

As a matter of fact, if it were me at the gate, in the hat (unlikely), not only would I wait for the other person to go ahead, I would invent a reason for my hold up so that he wouldn’t feel too bad.

Most likely, I would feign a shoe lace crisis, get down on one knee and pretend to sort it out.  And, yes, I guess I expect others to do the same or, at least, find their own subtle way to keep out of my space.

It’s just me, I know it is.  You see I don’t really like having social interaction pressed upon me.  This manifests itself in my uneasiness with internet chat – MSN and such-like.  If somebody pops up and starts a chat, I generally wish they hadn’t.  Twitter is different because you can take time and gauge your response.  My ‘gauging’ usually only lasts about three seconds but they’re three seconds I value all the same.

I lived in a big city for many years and I realise that city centre commuters will have very little empathy with this particular belief of mine.  But it’s different there.  The morning and evening commute in the big city is an unavoidable crush of humankind.  All considerations of personal space must, necessarily, defenestrate at that point.  But, even in the big city, this belief applies in the sparsely populated suburban streets of the final leg of the way home.

I’ve studied the people (few, mercifully) who end up walking alongside me on the street and who won’t go away and, yes, I can confirm that there is indeed something wrong with them.  There is a blankness behind the eyes, a dragging of the arms, the beginnings of a string of drool, perhaps, at the corner of the mouth.  They’re never right, these unsolicited co-walkers.

“It’s easy,” you scream in undoubted frustration, “if they impose themselves on you, then do what you would do if it was you doing the imposing.”

Read it again, it does make sense.  If the other person won't do it then you can do it!  You do the stopping, the shoelace fixing, the urgent texting, the ear scratching, the searching of pockets before finding the missing thing thirty seconds later.  You do it and let the drooly guy walk on.

Well, yes, I do do that, obviously, but it’s not the point is it?  I shouldn’t have to make these concessions to the world.  There should be a little give in the world for me.  Is that so very much to ask?
- Morning.

-Yes it certainly_ look, oh my, my shoelace appears to be… no, you go on, leave me, ‘save yourself' and all that, yes, hahahahaha… bye, yes, bye…

Couldn't agree more. There's nothing more off-putting than looking up from your gait to find that there's some jaunty bugger meandering along beside you.

I often just stop in the middle of the street and watch them realise I've done it. Being publicly shamed is the only way they'll learn

Michael: This is Great News. I really thought I was on my own in the world. We must meet up sometime and not walk together somewhere. :)

And I thought I hated that because I'm a small woman and don't like the feeling I could be overpowered by a stranger when only a few moments before I was minding my own business.

Then again, working for law enforcement made me look at all strangers for signs of impolite social tendencies. :)

I get it. What I also hate is when I’m coming up from behind a person, walking faster than they are obviously, and for a few seconds we end up walking side by side. Okay it’s necessary if I’m going to pass them that for at least a fraction of a second we will be parallel to each other – I’m not so weird that I’m going to gripe about that – but what I hate are the ones who insist on walking almost as fast as you are so that what should take one or two seconds ends up taking five or ten. You see this more when you try and overtake some guy in a car – he speeds up as you start to overtake him – but walkers do it too.

I’m fairly misanthropic when it comes to my neighbours. If I’m about to leave my flat and I hear someone in the stairwell I’ll wait for a few seconds to see if they’re going up or down and give them sufficient time to get a reasonable distance from me before I’ll step outside. If I happen to pass them on the stairs then I’m perfectly happy to greet them – it’s not like the head goes down and I scurry past – but if I can avoid contact I prefer to. I actually quite like when strangers say hello to me or smile in passing as long as we’re heading in opposite directions but if some wee biddy decides to tell me her life story at the bus stop what are you going to do?

Hope: what you're talking about is a worry to the conscientious gent also. If I find myself walking behind a single woman at night – and if crossing to the opposite pavement is impractical – I tend to speed up so I can overtake her. Get the moment over with quickly, right? Better than matching speeds or going extra-slow.

But yes, the general aim with pedestrians should be the same as with buses. Regulate the service – maintain a decent interval.

This is something I noticed way back in high school. There is a certain pack mentality with people in situations such as this. From an animal-in-the-wild perspective it makes sense, there is safety in numbers.

Next time this happens you can play a little experiment. Speed up your pace just slightly and watch the person subconsciously do the same. And now slow down just slightly. Again, same outcome. If you mention it, they will be none-the-wiser and may even accuse you, a perfect stranger, of being off your rocker.

Sometimes it's just too fun to play games with people who have no idea you're doing it. :)

Absolutely. I don't commute these days but when I did I used to value my own company in the mornings. I didn't often have a shoelace to tie up but I'd often make an urgent detour to collect nothing at all en route to work just so that I could be on my own and not talk to anyone.

I crossed the road the other day and found myself walking next to a guy.

I sped up, to get a distance from him. He sped up.

I sped up a bit more.

He sped up a bit more.

By the time I got to my office, we were both walking at warp speed like some sort of crazed Olympic athletes in civilian clothes.

As I peeled off, I could just imagine the relief in his body language as he could slow back down to a normal pace.

I'm exactly the same way. It's not that I'm antisocial, but I like to choose when and I were I socialize. If that happens to me, I usually slow my pace or stop and check my phone, but it should be them having to do it, not me.

Bob Hanson: If I was walking along a dark road at night and some guy had been behind me for a while, then started to speed up and get closer to me, I think I might actually have a heart attack...

But I hate keeping time with someone's walk. Even if I'm a few paces behind, I feel like a total tool, like I'm following someone, even though I'm trying to go to the train station, or work, or whatever.

In reference to your title, I find that I look at my watch as I walk past people who are making uncomfortable eye contact with me. It's a convenient distraction and helps me avoid awkward nods of acknowledgement or empty "How's it going's" -- just one of my little quirks.

If I was you, I'd find myself wondering why these dead-eyed, arm-dragging droolers felt so naturally drawn to me...