When You Go Your Own Way 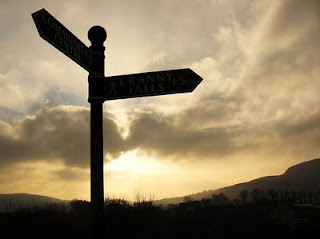 This week I’m mostly trying to get a particular thought straight in my head.  It often helps if I type through these things.  Maybe it might help you too, who knows?

It relates to writing. And negativity. Well, a bit anyway.

I was having one of those ‘Dark Tea Times of the Soul’ (respect to Douglas Adams) about my writing a few weeks ago.  My thoughts went something like this;

“Everybody in the world is writing.  Everybody has computers and word processors and printers.  Everybody is swigging coffee and pushing themselves and creating scenarios and characters and working hard and… just… writing.  So why are you any different?  In truth, you’re just another slob with a PC and a dream.  There’s a million of you out there and quite a significant percentage are most-likely a whole lot better then you are.  So why bother?  How can you ever hope to succeed?”

Like I said, it was perhaps not the very best of days.

But then I had this other thought.  This thought that I’m trying to get straight in my head.  Oddly enough, it was about the Live Aid Concert in Wembley back in 1985.  Bear with me on this, I think it’s pertinent to the point about negativity, I just have to work through it a little.

You see, I was lucky enough to be at the Live Aid Concert back in 1985.  It wasn’t quite ‘The Perfect Day’ that it may have seemed on the telly but, looking back, it wasn’t terribly far off it either.

But this thought-of-mine doesn’t relate to the concert itself, it relates to what happened when it finished up.

What happened was that we all went home.  All of us.  Pretty much at the same time. And there was a bloody enormous crowd of us.  As we all crushed out of Wembley Stadium and onto the pavilion, I remember thinking something like this;

“I am part of an enormous crowd of people.  We are all going the same way, wanting to get to the same place.  How can this ever work itself out?”

… and suddenly I was alone.

This was very surprising to me.  One minute I was in a crowd that seemed unbreakable, eternal.  Yet it only took a couple of minor turns for me to lose the crowd, who had all made their own turns, and be out on my own again.

So at the end of all my gloomy ponderings (see above) I took some heart from this memory.  I don’t want to kill the point by driving it home, I think the analogy is pretty clear but, just in case…

Perhaps you write (or whatever it is that you do) and you fear you are one of a huge crowd and will never stand out, in your own right.  I reckon that if you just continue to go your own way, make the turns you need to make and be true to your route then, not too far down that line, you will be out on your own, doing your own individual thing.

Will it be good enough?  Well that’s another question, isn’t it?  That takes learning and perseverance and maybe a little luck and talent, who knows?

But as for The Crowd?  There is no real need to fear The Crowd.

Just turn once down there at the bottom, then again at the end, then once more - you decide which direction to go.

Then, for sure, you will be out on your own.

I wasn't at Live Aid but the story along these lines that has stood out for me is that apparently, allegedly, at the very, very end, Bob Geldof was left practically alone. Had to get a lift.

I don't know for certain what this tells me but I think of it often and noodle around issues of the impermanence of things, the way we are ultimately all alone. That no matter how big a thing is, good or bad, it ends.

This is all depressing me now yet I started off with the aim of expressing how your thought made me rather buoyant.

Sorry you've had a bad time, trust you're realising and accepting that there is a crowd but you're the only Ken Armstrong.

For better or worse, I'm the only William Gallagher. Except for all the other ones.

William: Go back to 'Buoyant' for that is my aim.

Geldof's biography was called 'Is That It' cos that's what an audience member at the front of the stage allegedly said to him after it was all over.

I suppose this thought has been expressed by many people in many different ways but I hatched it myself (Easter reference there...) and thought it is meet to set it down, to quote somebody-or-other (I *do* know who really).

Excellent post. I have to say I agreed throughout...
How many people are actually unique? Everyone is doing something that's already been invented but the trick is to do it well, do it n your terms and stand out and shine.
The thoughts you have are not uncommon, I constantly think the same, should I just give up and go and get a proper job, should I go back to working in PR and forget about doing what I really like because there are better writers out there.
But do you know what? There are always going to be people you look at thinking "they do it better" and when you think about it - that's not a negative thing. After all, if you are the very best of the very best how will you improve, who will you look up to and admire?

There are always going to be times you stop and doubt yourself and that's what makes you the wonderful writer you are.

Rachel: Thanks for such a nice comment. I tend to think that being highly self-critical is the most powerful attribute a writer can have.

It's a very interesting analogy.,and come to think of it, you're right. We are individuals of our own right and each one of us will always be unique from the other.

You're a pretty accomplished writer. You've gone a long way. What's next is perhaps a screen play (screenwriter) to one of the movie blockbusters of this era? Who knows? I look forward to it.

This reminds me of a documentary I saw a few years ago about a guy, a homosexual guy, talking about taking part in his first Gay Pride march and how the only thing he had in common with the guy next to him and the guy next to him was his sexuality. You and I are both writers but that’s really all we have in common, in this context. We ‘march’ side-by-side supporting each other but once the march is over we go back and write the kind of stuff we want to write in the privacy of our own garrets.

Yes, there are better writers out there than the two of us. There are very few writers on the planet where there isn’t someone better than them and if we count all the writers who have ever lived then there will be likely someone there who can run rings around them. Being best isn’t the end goal. Saying something that’s worth saying is. And then finding someone to read that something. It doesn’t matter if someone out there has said exactly what you’re trying to say only better if I don’t know that other person. I may never know that other person. There are too many people in this crowd of writers for me to find the handful who have said everything I ever want to hear the way I’d like best to hear it said. And so I settle for the likes of you and you settle for the likes of me, people who say it well enough for most people. That’s all we need to be because that’s all the only audience we’re likely to find will expect from us. In fact if we start to get too clever we might lose them and then who would we be writing for?

The smile on your face makes you stand out whether alone or in a crowd. The smile might be one of contentment, of ecstasy, or satori!
Or it might be fury, disgust, or war.

As writer wears truth on their face. However, truth is not the same thing as honesty. I need to distinguish them here, in any event! Maybe honesty concerns facts - lists and itineraries; whereas 'truth' concerns passions, causes or motivations - connecting the sea inside to the world without; a mantra of sorts that reminds you why you chose to do this in the first place.

Maybe truth and honesty become separated at some point and this is when one loses the mojo. Oh no, I am starting to think too much.

Yes, I've had the same thought. Why do I write when a million other people do the same?

Because it's part of who I am. Just like the green eyes and the freckles. And if I tried to stop because of "all of them", I'd just be miserable. Which to me, is somehow worse than not famous or possessing a puny bank account.

Plus, if it weren't for our need to share words, I'd never have "met" you...and my life would be poorer because of that missing connection.

A couple of years ago I gave up, or left, or was banned from, all the online poetry workshop communities I had been involved with up to then. I was suddenly on my own. It was simultaneously lonely, liberating, exciting, and scary.

I realized one very important thing: Sometimes you not only have to leave the crowd, but for the sake of your art you must follow your own inner compass, no matter where it leads. Even if it leads you off into the lonely wilderness. Even if it seems to lead you astray. (Others are quite likely to say you've been led astray when you don't live down to their expectations anymore.)

I recently went back to one of those old poet workshop boards. I wanted to see some old friends I'd ben out of touch with for all that time. I joined in. And, almost immediately, it became apparent that it wasn't going to work. I still had nothing in common with these folks anymore, since my recent writing was continuing to explore off in new canyons, and that was just going right past them. One person even said "This isn't poetry." Of course, he's an ass, but that's another issue.

Pretty smart post. Clever to think of it that way.