Frankenstein at the National Theatre at My Local Cinema 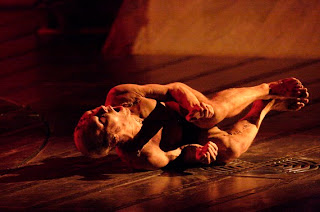 My only regret was that I went to see Frankenstein, on St Patrick’s Night, on my own.
When it was over, I longed for someone to effuse with.  There was other people there, of course, but it didn’t seem right to burst in on them and try to share with them how bloody awesome I thought it had been.

So I just left.

The lady who sells popcorn seemed amenable to a chat so I told her what a great experience I had just had.  She said she had dropped in for five minutes, expecting nothing, and would have loved to stay for it all.

Then, in the car park, where was a lady getting into the car beside mine.  I am aware that one can scare people, striking up conversations in darkened gravel-topped parking areas but I still ventured a quick word across the car roofs.

She had put it better than me.

Mary Shelley’s Frankenstein has been adapted into a new play by Nick Dear, it has been directed by Danny Boyle and Benedict Cumberbatch and Jonny Lee Miller have been cast in the roles of Creator and Creature – roles which they swap every show.

It was, for me, a mouth-watering prospect and if I had still been living in London, I would have queued long-and-hard for my ticket to see it.  But, of course, I don’t live in London anymore and budgets do not easily soar to a quick nip over to The Big Smoke to catch a play.  So I couldn’t see it.

Except, of course, I could.

It’s this new thing, you see, where the National Theatre beams a live performance to cinemas all over the place so that anyone can easily come and see the play.

I was very excited at the prospect but my expectations were a bit lowered too.  I’ve watched my share of theatre on the telly and it never seems to work well for me.  Something - the intimacy, the urgency, the danger - gets lost along the way and one often seems to be left with a poor-man’s telly-show.  What I expected was a chance to get a least some diluted feel for the new production and the greatly-praised performances.  In actuality, I got so much more than I bargained for.

I put much of that down to the sound.

The audience in the huge auditorium were very much a part of the broadcast.  Before the play started, they were there, chatting and murmuring, finding their seats and opening their toffees.  It was a buzz, literally, and it created a buzz, figuratively.

The play was expertly shot from multiple angles with close-ups, veering zooms – the lot.  The overall effect, I reckon, was to elevate the cinema viewing to a place almost beyond being present, in the flesh, at the event.

So I enjoyed this immensely – and I really mean immensely.  I was elated for hours afterward that I was permitted to see it as I did.

Then I got to thinking hard about it, letting the logical brain work at it rather than just the gut reaction.

So much for the Event, what of the play?

The central performances and the production were simply phenomenal.  That’s my view.  I saw Cumberbatch as The Creature and I was astonished at the balletic and moving performance he gave.  Jonny Lee Miller had the slightly less showy part as Frankenstein but both brought great integrity and no small measure of spittle to their work.

The lighting and general production-values are like nothing I have ever seen.  Astonishing.

Now, let me be critical.  I always think it’s important to try to be a bit critical.  It’s like proof reading a text – if you only look for the good stuff you will not learn of the improvements which may need to be made.  So…

The writer – Nick Dear – has invested great passion and insight into his central duo.  Unfortunately the supporting characters often come out of the deal as sketchy and somewhat caricatured at times.  Frankenstein’s Dad was the worst – he just seemed to be an impotent deliverer of occasional dismay.  The Scottish assistants made Willie from The Simpsons look like a Caledonian Documentary Figure and the Blind Man’s Son and Daughter in Law were quite Twee and Predictable.

But Dear is not a weak link here.  He pulls some masterstrokes – one, in particular with his treatment of Frankenstein’s thoughtful new Bride which left me quite shocked at the very audacity and brilliance of it.

Danny Boyle is a visionary and his vision here is a clear, faithful presentation of Mary Shelley’s perhaps overly-lauded book.  It is, at times, visceral, tragic, philosophical and funny.  It is really quite special.

In summary - after I calmed down a bit, I may have seen some flaws with the play and with the supporting roles.  But to hell with all that!!  I came out of that cinema on a complete high, thanks to that play, and - clever-clogs reservations or not - that makes it a One Hundred Percent winner for me.

They are doing this all over again, in many venues, on Thursday 24 March, with Jonny Lee Miller taking the Creature role.  I recommend most highly that you try to see it and then please come and tell me what you think.

What a wonderful idea! I think they've tried that in passing with some Broadway shows but it never made it past "big cities"...which is kind of ironic since it's those folks outside the big cities who generally long to see new entertainment!

Thanks for your interesting review. Now if I ever get a chance at one of these style performances, I'll be more willing to go.

Sounds as if it was a memorable experience. Am particularly taken with the idea that Benedict Cumberbatch and Jonny Lee Miller swap roles each night. That HAS to be a good way of keeping a production and acting fresh. Glad you enjoyed!

I saw it that night as well . Tempted to see the secound verson. I dd love it. I went even though I was having an official honest to goodness migrain and I still loved it.

I'm a fan of Cumberbatch. His modern-day "Sherlock" is brilliant!
We get operas on the big-screen, but so far, plays haven't been available. Sounds like a great idea!