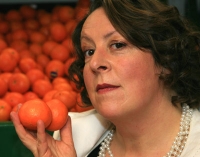 Having raved last week about the spectacle and power of Danny Boyle’s ‘Frankenstein’ at NT Live, this week presented a golden opportunity to remind myself that theatre is as much about intimacy and proximity as it is about the ‘Big Show’.

TooDog Theatre arrived at my beloved Linenhall Theatre to present two new comic one act plays which were both written and performed by highly-talented Denise Quinn.  The plays were ‘Bardot Bites’ and ‘Lucy Bastible’.

Having experienced the full ‘bells and whistles’ show the week before, I was perhaps more aware than usual of the danger of live theatre and how it is perhaps this aspect, more than any other, that sets it apart from cinema or television drama.  The audience and the performers lock themselves in a room by mutual agreement (and, by golly, it is hard to get out again until it is all over) the performer undertakes to entertain/challenge/provoke the audience in return for their time and attention and the audience, in turn, subliminally agrees to be receptive and not to rustle sweet papers.

This contract is an edgy one – you can tell this by the buzz of an audience beforehand and you will certainly feel it in the dressing room out the back.  A sort of ‘roller-coaster ride’ is about to be embarked upon and nobody gets to stand underneath and watch.  Everybody is on board.

This, I think, is why a couple of one-act plays, performed by one solitary actor, can be every bit as huge and moving and funny as the full force of the National Theatre in London.

I say it ‘can’ be.  This, of course, isn’t always the case.  For this intimate firework to go off, the ingredients all need to be in place.  You need, first and foremost, the writing – if that isn’t there then we are banging an empty vessel.  Then we need the Audience – a rare spice these days.  Most critically, on the night, you will need a performer of the highest quality to see you through.  This actor will be the catalyst for everything else in the dish and, if the mix is going to explode, it is going to be down to that person to make it happen.

And that is primarily where TooDog Theatre ‘won’ the other evening at The Linenhall.  Yes, they brought the writing.  Yes, they assembled a fine warm audience.  Yes.  But, make no mistake, it was Denise Quinn who gathered it all together and made it work.

With Denise, we knew our theatre-contract was in experienced, fearless, hands and that we would be rattled  through our evening without fear of falling.  Denise Quinn is a fine actor.  Because she also wrote the plays, she brought an intimate knowledge of the subtlety of both pieces and it showed.  She played a markedly different woman in both plays – one struggling with social disadvantages, the other over-burdened with social success.  They are indeed very different but it is within the discovery of those things which bind them together that the centre of the plays lie.  Both are rather lost and bewildered within their particular circumstances, both must act to reverse their fortunes and both will ultimately reap very different results from their actions.

Wait.  I’m making it all seem fuddy-duddy now.  Both plays are great fun.  Both are delivered as lively, fast-moving monologues which are sometimes reminiscent of Alan Bennett.  Denise veers from a character who evokes great sympathy and warmth to one who almost pushes these things away.

There is considerable subtlety in the playing, particularly in the first play where the heroine, Bid, grows visibly from being a lost, manipulated soul into a sophisticated happy person who has delighted in finding her true place in the world.  The audience loved Bid – she was a little fighter who bore all her responsibilities alone yet danced exuberantly at the prospect of an evening out.  It was hard not to love her.  The second play presents more of a caricature, I thought, an elegant, highly-mannered lady who is driven to memorable action.  Again, the audience greatly enjoyed this larger-than-life character and the highly-comedic but nonetheless tragic situation she found herself in.

Live theatre is indeed edgy and Denise had a couple of edgy moments in both plays with props and such.  The effortless manner which she took these on board and integrated them into her performance was, for me, one of the highlights of the evening and a masterclass in professionalism and composure.  One felt there was little which Denise could not do on a stage.

TooDog is a new theatrical endeavour with a stated objective to bring new writing before the national audience.  I hope it will reach a wide audience and continue to challenge itself and its audience with new and varied works.  I look forward to their return visit to Castlebar and will be sure to be there.
Posted by Ken Armstrong at 13:56:00

I’ve not seen many plays with only one character (discounting every Beckett play I’ve seen) but the one that jumps to the fore of my mind is Keith Waterhouse’s Jeffrey Bernard is Unwell. The version I saw was the one featuring Peter O’Toole and yes, there is a small supporting cast, but it feels very much like a one-man play. You’ve read one of my plays. The other is a monologue I wrote for my daughter when she was seventeen and showing an interest in being an actress. It was called Living Will and is basically my version of Krapp’s First Tape, a young girl gets her hands on her dad’s camcorder and decides to records a living will. Typical me, after my daughter’s interests moved onto other things (boys, drink, more boys) I shoved the thing in the drawer and forgot about it. I tend to forget about my plays. I really shouldn’t.

Thanks Jim. Perhaps TooDog might have a look at it? We're certainly looking at a fine actor here, in Denise, and I can always testify to the extraordinary quality of your writing.

It's a nice idea but Wilma is a kid of about fourteen and flat-chested and as good an actress as Denise might be I think she would be struggling to convince any audience of that.

Fair enough. I tend to forget about my plays too. We need to be more pushy. :)