Acting and Me Acting 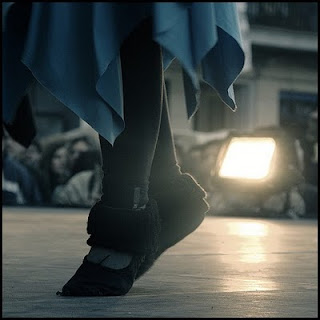 Although I love to write for the theatre, and although I can seem to be quite a boisterous person when I’m ‘on show’, I never imagined I would actually perform in a play.

It’s over now and I don’t think I will ever do any more.  Thinking back on it, though, it was an adventure that I wouldn’t have missed out on for the world.

My friends Donna and Oísin and Eamon are all into theatre and they’ve all acted and directed and produced stuff down through the years.
They had this idea of forming a theatre group to do amateur productions and tour them on the national play circuit competitively.

They had a play in mind and they needed a fourth actor… so they came and got me.  In fairness, my credentials for this role were quite impeccable – you had to sit on a chair, be tortured, say ‘yes’ and ‘no’ quite a bit and look unshaven and distressed.  I do that stuff all the time in real life so I said yes.  We formed our theatre group called KODE (our first name initials) and things got rolling.

If it had been a ‘hard’ role, with lots of line to learn, I would probably have said no.  I wasn’t sure I could learn a pile of lines – I can’t even remember a person’s name without a half-hour’s study – but this play had very few lines for me and that helped.

Of course it wasn’t an easy play at all.  It was ‘One For The Road’ by Harold Pinter, a play of power and torture and neglect of human rights in which a husband, wife and child are tortured by a dispassionate and rather terrifying authority figure.  As it turned out, I had to ‘act’ much ‘harder’ than I ever could have dreamed.

We took the play around the country.  Friday evenings, when normal people were watching the latest comedy show on Channel 4 and swigging cans of beer, we were shivering in the dark wings of some community hall in God-knows-where, waiting to spring out and alarm a reluctant audience.

“What is my first line?” he would ask.

He was joking of course.  Eamon and Donna are both consummate actors.  In their scenes together they threw such vitriol and physical violence at each other that the audience often recoiled in shock.  It was something to see.

I often think that ‘One For The Road’ was our best play.  But I was hooked now and came back the year after to play ‘Golly’ in ‘Ritual For Dolls’.  I guess, of the three I played, this role suited me best.  I got to dress up pretty wildly and hide my face behind a ton of boot polish.  I also had a ton of lines but I managed to learn them and even retain them to this very day… “Behold”, my heart says to me, “here is the love of your life…”.
Before I went on, I used to sit on the floor in a corner, in full Golly regalia and people walking by would jump when I said hello to them – they thought I was just a big dummy… yes, yes I know…

They were exciting times, comradely, tense, hilarious, fulfilling, memorable and I think it helped my theatre writing too.  I think I got a better sense of what was possible and actually expanded my view of what could be done on stage rather then contracted it.

Every night we went out there without prompts of any kind.  If we messed up or forgot our lines, we were on our own.  There was a real element of the high-wire act about the whole affair and I won’t soon forget it.

Time has moved on and now, happily, at the end of this week, Donna and Oísin get married so KODE will all be together again, at least for a little while.

We may not go so far as to put on a play but we’ll surely remember those good times and re-tell a few of our  ‘war-stories’.

I’m afraid I’ve never had any desire to perform. I was watching Lenny Henry on Sky Arts yesterday preparing to sing at a jazz club. During the programme he took us back to the place where he grew up and showed us the alley and the mound of grass on which his first ‘performances’ took place. Just the thought of standing up in front of an audience like that makes me uncomfortable. That said I have spoken publicly but by that I mean read a prepared speech, one that had been rehearsed into the ground, but I still needed my script. I’m not sure if I’m jealous or not. I’d like to be able to do it but I wouldn’t be me if I did. Mind you that might not be a bad thing.

You not being you? That would be a *terrible* thing.

Thanks for coming by. I really appreciate it.

I only wish your theater was around the corner so I could come and watch. :)

I was smiling as I was reading this. I could imagine you being unshaven and tortured...lol...but still with a smirk on your face...

You should do more of stage plays. Can you by chance, post the video of a part of your play in your blog, so those of use in the farthest corner of the continent can have a glimpse? Thanks.

I tried acting when I was a kid. The school wanted me to do it. So my Mother had me join an acting group for kids. We put on a play about fish and a pricness and so on. I might still have the script. I did get a fairly big part. I did manage to do it all and didn't forget what I was supposed to say. But, I'm not a natural performer in person. I have trained myself not to say "ummm" and other stalling things people do in speech. But, I perform much better on paper, in every way. I like the mystery of making the words up as I go along. I also like having the control of being the only one speaking. People who interrupt when I am talking make me want to do bad things.