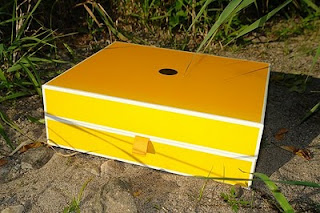 And then there is one place that you really shouldn’t ever park at all, ever, ever. ever.


This place, immediately to the front of the shopping centre exit, is designated by a yellow box painted on the ground with yellow criss-cross lines inside.  You know the sort of thing.

And it annoys me profoundly.  You know the reason why, don’t you?

It's because there’s nearly always somebody parked in the yellow box.
There is no ambiguity about this box.  It is evidently a clear way, a safety exit, a place which should never be blocked

Parking or, as is more often the case, stopping-and-sitting in the yellow box causes difficulty to everybody else in any number of ways.  It reduces the passing traffic to single lane so that cars coming either direction have to give way to each other while the twerp in the box sits back and enjoys the show.  It blocks the trolleys of the people coming out of the shops.  It clogs up the whole little eco-system of the car park – all for the benefit of the one loon who does it.  Did I mention that the box only has room for one?

This lack of thoughtfulness beneath my window has grown in my head to become an analogy for Man’s overall Inhumanity to Man.  I look at the various types of people who do this thing – for they are indeed legion – and I see some of the worst qualities of the Human Race reflected in their obtrusive wing mirrors.

The most common type is the ‘Bully’.  Elbow out of window, belly out of shirt, his risible taste in cassette-delivered music imposed on the people he inconveniences.  His whole demeanour tells the world, “I know what I’m doing, come and tell me about it and see what happens to you then… wimp.”

Then there is the ‘Naive Fool’.  He doesn’t know he is doing anything wrong.  He is baffled as to why the traffic is backing up all sides of him or why the old-dear just collapsed with exhaustion trying to manoeuvre her trolley around the back of his Fiat.

And, of course, the ‘Professional’.  Very busy, only there for a moment, doing everyone a favour by getting his important stuff done so quickly.  One of the worst, that.

I see all these types and many more and I know that, if they would only wake up and see the trouble they are causing for their own small comfort, and if they could only then persuade the rest of the world to wake up and do the same…, well, then things might be all right, I guess.

So there it is; ‘Man’s inhumanity to Man’, all packaged up and delivered to my doorstep, wrapped up in my local car park’s yellow box.

Have I succeeded in pinpointing the key problem with society today?  Have I opened up a possible avenue of hope and reconciliation?
… or do I just always need to have something stupid to be annoyed about?

They should take the way of the Stones and just Paint It Black...

Why not write a poem about what a dick/twat they are, print copies on a postcard and run outside and put it on their windscreen. With any luck, they first think it's a parking ticket then they might even read it.

I actually use to own a pad of "fake" parking tickets, which allowed you to tick off any number of rude and inconsiderate behaviors. The bottom line said, "Are you always this rude or were you just born that way?"

Fight on, Spirit of Caring and Kind Humanity. We've got your back.

I actually think you’ve been too kind to the ‘Professional’ because I find their attitude is more one of superiority. No one else matters apart from them. No one else has anything important to do bar them. Their time is precious.

Could you put up a sign which said "This Parking Space reserved for Idiots"??

Dermot's answer is the Bomb -- that's the solution I pick.

It's amazing how much trouble and agony are caused in the world by the legions of Stupid and Selfish.

I wouldn't call it something stupid to be annoyed about -- I'd call it another reason to despair for us all. Okay now you know what sort of mood I'm in LOL

As a pedestrian that really peeves me too. I get tempted to drag a nail file down the length of their car as I squeeze by it. I haven't done it so far. But, there will come a day when I am having a bad day and will inflict it on some arrogant ass who chooses to ignore my need for space in this way.

I saw a great sign on a handicapped spot once. It said, "If you aren't handicapped when you park here, you will be when you leave" Okay, maybe that's a little harsh.

There's a yellow box here and there's nearly alway's someone parked in it. I know what they're thinking:

Like that makes it okay? Meanwhile everyone else has to wait.

Ha, I like it that all your transgressors are male! I used to work for a Moron that drove a Merc who consistantly parked in Mother and child or handicapped parking spots on the grounds that he was far too busy to go looking for a parking space like an ordinary pleb!