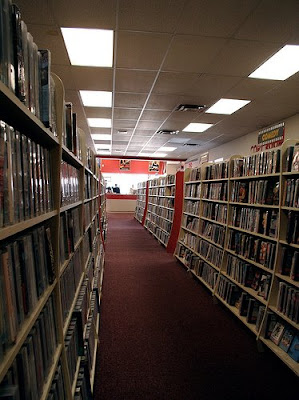 As in most places, there’s a Recession going on around here.
You can see it very clearly in the shops. They are simply not as busy as they used to be. People are not buying so much these days. So you’d think you might get in and out of the bloody places a bit quicker, wouldn’t you?

The shops weren’t dreadfully busy – there’s a Recession on, after all – but there was more custom than one measly till could handle. So I waited.

“Deal with it!” I hear you roar. “The shops are short staffed on account of The Recession, we all have to knuckle down and suffer together.”

It’s a good argument – except it’s totally wrong – and herein lies the rub. There was loads of staff in each of these shops. Gangs of the little feckers. But they were all out doing some nameless bloody stuff on the shop floor. They were all engaged in something-or-other instead of coming in and firing up till number two and letting me be on my merry bloody way.

And what were they doing?

One of the shops was the video rental shop. The poor bugger behind the counter was sweating diamonds and the queue was like a Miley Cyrus concert ticket line. Meanwhile yonder dozy pillock is out among the DVD’s apparently doing nothing more taxing than trying to figure out what he might bring home and watch that evening after they ejected the last of the un-served customers and shuffled off home.

I eventually let the ‘umbrella mission’ go and walked home in the rain but, in the video shop, after five minutes of needless queuing, I cracked and asked whether the mega-star down in the romance section might sidle over here and let some of us poor bastards go home sometime tonight.

And he did and we all saw that it was a better way.

Customers – Ask for another person to man a checkout… because you're worth it.

Retailer – I left your shop without purchasing anything for one reason only. Because 50% of your male sales staff were out checking out the bras. What does this tell you…?

Great post. I definitely feel your pain there. Many a time I've walked out not buying a thing because of ridiculous queues which could have been easily fixed.

Maybe they would have been more receptive if you had been buying a bra.

Moral...buy the bra, along with your other purchases, and then donate the bra to a braless shelter.

There's a recession going on after all.. ;)

I worked a few years in a large department store, mostly on cash. However many cashiers are on, they usually aim low as they expect they can call on floor service people or merchandise people (stocking and cleaning up the product displays) if things pick up and we get a line up. This is a nice theory. But, no one wants to come up and do cash. They avoid it. I've been the one calling for someone to come and open another cash and not getting any warm body. Eventually, I admit, I just stopped caring how long people had to wait. I was a fast cashier and could get them moving out of there. But, there would always be someone protesting the price of something or wanting something extra that took time. You just learn to deal with it all. One customer at a time. On top of that we had to push for credit card sales. So, if we got someone to sign up the line would be stopped for that too. People did get angry. But, I was doing as commanded by the store. We were told every day that we had to sell credit cards or be fired. Anyway, that is why there is a line up and only one cashier. You should complain but I don't see anything changing. The more they pressure staff to come up and do cash the less eager they feel about doing so. lol

50% of the male employees were checking out the bras--hysterical....

But I gotta wonder...are you getting impatient and cranky in your old age? Life is too short for such inconsequential shit to eat away at you. Life is also too short to wait in line. But what you could do, while you're waiting in line, is pick up a book or some other piece of merchandise and rub your grubby paws all over it and when you get to the counter you can say this piece was dirty or damaged and get some revenge that way.

But lately, when people ask me how I am, i just say I couldn't be better. It's uplifting and I find I go about my day a little happier with more smiles on my face which has to be good for the blood pressure. Life is too short to be a cranky old pissed-off curmudgeon--like my father.

As for waiting in line...I do most of my shopping these days online and have the goods delivered to my door. You might want to think about that.

We're just getting old, Ken. The whole retail experience is simply not what it used to be which is why about the only shop you'll find me in these days is a secondhand book shop and I don't think I've ever had more one person in front of me there. Like Matthew, I buy virtually everything online these days (even my bras - one has to look after one's man-boobs).

Mike: Exactly. If it were my shoppe and I saw dudes leaving the queue and walking out *that* would be one of those things that make me go 'hmmmm'. :)

Not The Rockefellers: The braless shelter sound like my kinda place. How do you get it? :)

Laura: Thanks. This insight from the other side of the counter easily doubles the value of this post. Mind you, it wasn't worth that much to start with... :)

Matt: Astute as ever. I like to think that I too am meeting adversity with a generally sunny disposition but there's little material to be found in the sunnier aspects. It's only when I get my Grump on that the words ensue. :)

Jim: Older, yup, I feel that all right... but all I wanted was an umbrella and the dude was holding sports bras up to his chest... I mean... :)

hey, the world needs all the stutes it can get.

Ken, it is of utmost importance to locate your nearest shelter.

They need the support. :)

ROFL about the bras!

But yes, what is this about: I'm getting it too? Even today, in West Virginia we went to a big mega-bookseller and I found myself walking through the place searching for someone to help me; the customer service desks were completely deserted. Plenty of coffeemaking folks and floor-sweeping folks, none of whom knew how to find a book. ARGH!

Good luck next time you go in there!

I had thought as one grows older, one would be more patient. But it seems ...just kidding.

It is something that could not be helped, that's why I dislike buying in department stores.

My problem is if I FINALLY locate another drone...um, employee, after a search resembling a great expedition, they look at me and say, "I'm on break".

I always swallow the part where I tell them what I'd like to break. :)

No, we're not getting older. Customer service is becoming extinct...probably because, as Matt pointed out, it's easier to buy online. My computer is always ready to wait on me. :0

Men checking out bras. Lovely bloody story. Hey, if not for those little feckers, this would not turn out to be as funny. You owe them that at least. :)