I Am (Not Really) Legend 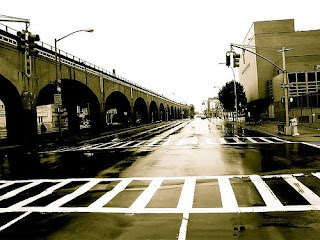 Last Friday night’s DVD treat was 'I Am Legend', directed by Francis Laurence and starring Will Smith and, well, hardly anybody else really.

I’d been looking forward to seeing this, even though I’d heard some rumblings of discontent from those people who still get out to the cinema from time-to-time.

It was the source material, you see.


The original novel has been a favourite of mine for some time. The author of the short novel ‘I am Legend’, Richard Matheson, was a hugely influential writer in the realms of science fiction and, indeed, other genres.


You might know some of his adapted work from movies such as The Incredible Shrinking Man’, ‘Somewhere in Time’, ‘The Legend of Hell House’ ‘Duel’ or ‘What Dreams May Come’. Stephen King name-checks him as a major influence (he dedicated his novel ‘Cell’ to him) and if George A Romero doesn’t cite him then he bloody-well should… I’m sure he does.

So, anyway, I loved this novel ‘I Am Legend’.


It spent a lot of time deriving scientific explanations for some of our wilder supernatural obsessions and succeeded quite well in carrying it all off, in a slightly-dated sort of way.

For me, the book really stood out in the way the writer evoked the relationship between the hero, Robert Neville and a stray dog he finds. I won’t spoil it but the oh-so-slow build up of trust and mutual-dependency is extremely well handled. I recommend you seek out those chapters dealing with the man-dog relationship and read them – even if you feel the whole novel is not your cup of Horlicks.

I had watched with interest while Ridley Scott and one Arnold Alois Schwarzenegger battled in vain to get their version made.
Anyway, you get it - I had some history with the subject-matter. And now here was a gleaming new version, with a personable actor in the central role and a budget which might do the project justice.

There are good things in it, make no mistake. It’s a tall order for an actor to fill up the screen all on his own for most of the running time (ask Tom Hanks) and Will Smith carries it off very well, giving what is, in my opinion, a very fine acting performance.

I am not trying to be funny when I say that the dog does a very good job too (there was probably seventeen of them). Some part of the touching relationship from the book is recreated here and in one scene where the dog is hurt, the amount of man-handling which the animal permits is impressive.

Also good is the desolation evoked (by CGI mostly) in the empty city.

But the film suffers a third act collapse. Story, character, mood and emotion get chucked out the window into the vacant city beyond and the resolution just doesn’t cut the mustard.

Worst of all, the ‘CGI’ing of the 'infected' removes the lingering hint of humanity which was their most chilling feature in the original story. In this version, Neville is challenged by outlandish monsters rather than altered versions of himself and the drama is much the poorer for that.

If you’ve stayed with me so far, here’s a thing.

The original movie, the Vincent Price one, has now fallen out of copyright and thus can be viewed online without damaging anyone’s moral rights.

There are a number of sites which have it but most of the versions are cropped pan-and-scan jobs from TV. Here’s a link which offers the full movie in glorious widescreen. I haven’t watched it myself yet but I will and I fully expect it to be a bit silly. But the screenplay was written by Matheson (he later disassociated himself on account of script-changes) and the film is credited with influencing many Living Dead/zombie movies which came afterward.

Labels: I am Legend review richard matheson will smith

I had similar doubts about the film. I'd seen the two previous goes, The Omega Man several times in fact, but it was only a few years ago that I got round to the book which was excellent. Needless to say the film I Am Legend was not. Why, oh why, oh why does everything have to be an action flick? If I'd come to the film unaware of what had gone before it then it was an okay film; I was entertained. And that really is the problem for both of us.

I had the same problem with the Nicole Kidman version of Invasion of the Body Snatchers. This time I'd not read the source material but I had seen all three previous films and Shaun Cassidy's TV series, Invasion. What I hated (HATED) was the need to tag on a happy ending in exactly the same way that the original Blade Runner was ruined. If you decide to watch The Invasion switch off when they get into the helicopter and be done with it.

I'm not saying that a book cannot be bettered. Because I believe that Blade Runner is a better film that Do Androids Dream of Electric Sheep? is a book but Ridley Scott could never have developed his film without the book. Wisely he also didn't ignore the author when he did make his film.

I just watched the movie I Am Legend last week. I thought it was an okay movie. Nothing great. It kind of reminded me of the movie Cast Away. They're similar in that they both have solitary main characters for the most part of the movie.

I was entertained more by the movie Enchanted when I watched it the same week. But then again, this is more my kind-a movie.

Excellent review of this film, Ken - it pretty much summed up what me & my Bloke thought about it too (he'd seen the Vincent Price film, I haven't). Neither of us have read the source book and I'm dithering whether to or not.
I thought Will Smith was very good in it (as in, I've started to finally rate him as a 'straight' actor), but the third act did see the sense of isolation and menace drop away into a more conventional action movie.
And the CGI people were /rubbish/.

(Damn you Jim, by the way - everything I'm writing now, I keep seeing the different kinds of metaphors! Most distracting. I caught myself at least three times in this one comment.)

Jim: A fellow Blade Runner fan, eh? It's a firm favorite of mine - 'saw it the first day it ever came out.

Tashabud: It is like Castaway in that respect isn't it - I thought Tom Hanks did really well there - God that dentist-work!!

Catherine: Interested to know what 'Bloke' made of the Vincent Price version - worth watching?

Bloke says that the Charlton Heston version (The Omega Man as well) is actually the best one. The 'baddies' are more human which makes for a more fully developed story.
(He told me more, at length, including the respective plots, but I just kind of ignored the irrelevant bits. He can get long-winded.)

Great review! My favorite review of the movie thus far.

Definitely a case of "go buy the book instead".

I've seen the Vincent Price one. It is of shockingly low quality, almost sub-Ed Wood. But it's quite faithful to the source material and Vincent Price is excellent.