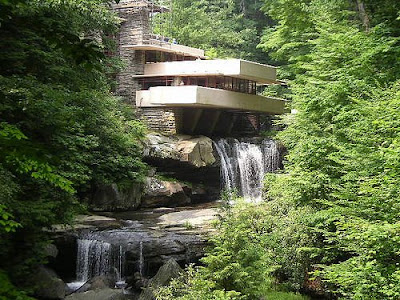 I used to be confused by Simon and Garfunkel's song 'So Long Frank Lloyd Wright' on that 'Bridge Over Troubled Water' album of so long ago.

Frank Lloyd Wright was arguably the world's most famous 20th Century Architect (my son John threw his soother into the FLW exhibit in the Victoria and Albert Museum twelve years ago - 'always the critic).

But the timeline doesn't work terribly well. FLW died in 1959 and it seemed unlikely that the very young Paul would have jammed with him.

Art Garfunkel had considered becoming an architect and thus earned the nickname 'Frank Lloyd Wright' from his musical partner.

So the song is actually about the breakup of Simon and Garfunkel. Paul is saying goodbye to Art in it.

Now it makes some sense.

As a sort of a bonus-track of Paul Simon song-interpretation, it is helpful to note that St. Cecilia is the Patron saint of musicians.

Bear this in mind when listening to the Simon and Garfunkel song 'Cecilia'.

It throws a little light, I think.

I'm so glad this post was short. My head is killing me and it was very difficult to read much... but I persevered and finished it. Now I know things... I only hope I can make use of this knowledge someday.

Wow. It's funny how a bit of background can help us enjoy a lyric or work of art or book just *that* bit more. Thanks for sharing these insights!

I had no idea! Wow. Seriously. I want to wake up Kyle and tell him. He probably already knows, though. I'll tell him anyway. I'm serious. This is the kind of trivia that grabs me!

Way cool information to know, Ken! However, from your tweet, I was afraid you were debunking the myth of the Cincinnati Real Estate Baroness we all know and love :P

Hey, very cool. I never would have thought that's what the song is about.

This was interesting since I'm a fan of both the architect and the group. The house pictured is Falling Water and is located about 3 1/2 hours from where I live. The water seen actually runs right through the living room. I saw Simon and Garfunkle on one of their reunion tours in Pittsburgh. They were still at odds and sniped at each other all night. It was a little uncomfortable!

That a fascinating couple of tidbits. Very interesting to read, over the first tea of the day. I always did wonder about those songs. Thanks for the info!

And this is why I love reading your blog... this and the stories. :)

Nice totally random post. Here's a random comment. The picture for this post is Falling Water in SW Pennsylvania. It is within 20 miles of Ohiopyle, PA, one of the United States' whitewater rafting centers on the Lower Youghiogheny River (Lower Yok). It is here that over a quarter million people from the Northeast US get their first taste of whitewater rafting on the easy Class III river and many just rent rafts and go on their own without a professional guide. this is not recommended as Class III water can be consequential. There is one Class IV on the Lower Yok where typically one or two people will die on average each year. Although there have been no deaths on the Lower Yok for a couple years. When beginners with no experience drink and decide to rented whitewater to their itinerary, things go wrong. Always keep drugs and alcohol away from whitewater, and always go with a guide until you have learned basic raft control skills.

About 25 miles from the Lower Youghiogheny is the Class IV-V Upper Youghiogheny (Upper Yok) in Maryland. This is one of my favorite stretches of whitewater. Five miles of non-stop technical paddling with huge drops that run into each other and consequential places not to end up, such as F*ck-Up Falls (real rapid name). You don't want to go there. You don't want to fall out if you go there. I fell out at the bottom of F*ck-Up Falls once.

Matthew,
I've been on that river. Froze my butt off, as we went rafting in May. It was thrill. We also went camping, which isn't my favorite hobby. I prefer to rough it in a nice hotel!

I have Simon & Garfunkel's Greatest Hits, and it is one of my favorites!

Reggie: Carve it on my gravestone: "His Posts Were Short." :)

Susan: You're welcome - not everybody believes them but I do.

Margaret: The only myth about that wonderful lady occurs when somebody with a lisp speaks of her. (Eh?)

Reese: I am a fan of the architect too and of S and G. Nobody harmonised better.

Phyl/Bookishgal: The first tea of the day... if that were a book I would read it. :)

Matt: Thanks for this. Fuck up Falls? I went to school there! :)

Reese: Hotel? Me too!

Pauls health blog: S and G's greatest hits was in my house for ever. Did you know that 'The Boxer' had a rarely-heard verse?

I love the note about Cecilia, I had completely other thinks in mind about it until now. Sucha enlightenment. Cheers!

Ken: Reese: I am a fan of the architect too and of S and G. Nobody harmonised better.

What you get from S&G is great harmonizing, but their arrangements were often very sparse. So to the extent that you HEARD their voices together as instruments more than the instruments themselves, I would agree with you. But they are NOT in a class by themselves. Their vocal talents were often not obstructed by the music.

NOW, combine amazing harmonies and incredible musical arrangements and you will be very hard pressed to find anyone in the same class as ABBA, although Wilson Philips, daughters of the Beach Boys and Mama and Paps singers, sure gave them a run for their money, as well as the many layers that Olivia laid down harmonizing with herself--which was a direct influence on Wilson Philips.

J.C.: I'm not entirely sure that it's true. There's a counter-theory that the song is about Paul Simon's black Labrador but all that making love in the afternoon stuff worries me then. :)

Matt: Dangerous words indeed Matt! How dangerous words can be... Far be it from me to go up against you and your ABBA 'enthusiasm'... so I won't ('wouldn't dare). But I still maintain that S and G achieved harmonies that are as good as any other. Scarborough Fair? Art had and amazing quality to his voice and Paul counterpointed it really well. Plus Paul is a lyrical master. Anyhoo... Interesting about ONJ harmonising with herself, I didn't realise that. That's Enya's secret, she harmonises in many many overdubs of her own voice for that etheral effect which I find I have little time for. :)

Yeah, at first I loved Enya, but by the second CD it all started blending into the same sound. I think Sissel does the same thing...she's famous for the non-worded vocals all throughout Titanic's soundtrack that most people think are Celine Dion.

But yeah, ONJ and John Farrar were masters at producing that self-harmony sound. ABBA do their own background vocals in overdubs, but Frida and Agnetha's harmonies are legend. Knowing Me, Knowing You and Dancing Queen are as good as it gets.

I agree with you on S&G's greatness, but again, they're more obvious because of the sparseness of their background tracks.

I vote for ABBA Ken, I agree with Matt, but I want to add Westlife into that list of "harmonizing voices". You can test if the voices are in harmony by listening to their a capella. Try it with Westlife and you'll know what I mean.

I personally think there should be many, many more songs named 'Cecilia' since it's so popular...

I run into thousands of Cecilias everyday. It's getting somewhat overwhelming and annoying.

A random comment to a random comment: Matthew Urdan knows entirely too much about white water rafting. There should be a limit to that amount of knowledge.

More about Matthew Urdan: you have pretty okay taste in music for an Irishman. Obviously a blinding and deaf love for Olivia, but it's okay... She looked great in leather.

And about the dog. One can never tell all their secrets. You should know this, Ken.

Matt: Yes, I see what you're saying, we appreciate their craft more because there's less music to get in its way. Point.

Jena: You come over here and I'll introduce you to Westlife. No worries. :)

Ohio Real Estate: Thousands of Cecilia's? I'm afraid you are mistaken in this. There is only *one* Cecilia.

Thank God, I was beginning to think I really needed to get a hammer to hammer the point the home into your dense skull!

@Jena: you are so brilliant and your taste in ABBA, I mean music, is absolutely impeccable! :)

NOC Blog Team: It's Matt, isn't it? You can call yourself what you like but that rarefied blend of merry personal abuse coupled with a manic love of all things ABBAesque kinda singles you out. :)