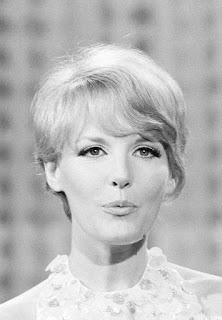 A song came on the radio on Friday afternoon and started a short train of thought. Just two carriages and an engine, no buffet car.  Let’s not beat around the bush here, the song was Downtown by Petula Clarke.

“When you’re alone and life is making you lonely, you can always go…”

You know the one.

We were in the office and we had switched off our regular radio station as a protest against their penchant for playing Christmas tunes far too early. Every time one came on, we penalised them by switching away for at least thirty minutes. Their revenue streams will doubtless reflect this early in the new year. That’ll teach ‘em.

We wouldn’t normally hear ‘Downtown’ in our working day though, in fairness, Ronan Collins would probably roll it out from time to time and we always switch to him between twelve and one, though not as any form of protest.

In my mind, ‘Downtown’ is one the first songs I ever became aware of. I was born in ’63 and it came out in ’64 and I guess it was on regular heavy radio playlist rotation for quite a few subsequent years. Mum would sing it in the house, just like she sang everything else.

I possibly also have an thing with the song because I am recently returned from my first visit to New York City. Did I mention I was in New York? (Yes, you did, Ken). When I did a bit of Wikipedia reading before typing this, I learned that the writer of the song, Tony Hatch, was in Midtown New York and thought he was in Downtown and wrote the song with that misconception in his head. I had something similar going on when I was there. Did I tell you I was there? (Yes, yes, I did.) I didn’t really think I was Downtown. I just didn’t really know what Downtown was. I do now, so don’t feel obliged to tell me. Also, as a small aside, Kojak used to always bring his arrestees Downtown in the big car with the strap-on emergency light. I remember that. Him and Crocker.

All this rather extraneous information is simply intended to show you that the song, the place, and the word ‘Downtown’ was lurking in my head even before Petula came on the radio and belted it out last Friday afternoon. I enjoyed it, as I always do. It’s got a sort of a Burt Bacharach vibe which I always welcome and it’s upbeat like Friday afternoons should be and so rarely are.

Last Friday, though, something else happened as it played. It sparked a distant memory from all the ways back in the Sixties when the song was brand new and when Mum was humming it in the Scullery.

It’s nothing, really, a mere bagatelle.

When I was small, I thought that Petula was singing about going Downtown in the town that I lived in. I thought that, whenever Petula had worries, she would go and seek out all the noise and the hurry of Downtown Sligo Town. And, in my young mind, I was a bit baffled by this. Quite simply because there wasn’t all that much to actually do in Downtown Sligo Town. I mean, you could go and see Clive and Henny in the Butcher’s shop and maybe get a bag of bones for the dog. Or, if you really wanted to push the boat out, you could go to the Bakery on Bridge Street and get a selection of fairy cakes in a white box tied up with string. Petula liked a movie-show whenever things were getting her down, but I’m not sure she would have felt right at home in the Savoy up on Market Street. Perhaps she tended to go large and head up to the Balcony.

Whenever I went Downtown, holding Mum’s hand, I would wonder just what attracted Petula to head down there so regularly and with such great enthusiasm. Perhaps she went in for a pint in Hargadon’s with all the old fellas who dotted the bar in the early afternoons. Perhaps she went into Woods and perused the clothes rail. She could buy something and, if she asked nicely, they might put it in their book and let her pay a bit off it every week.

I’ve been to New York now and I’ve been to fabulous Downtowns all over the world but I’ve never quite freed myself of this childhood notion that, whenever Petula is alone and life is making her lonely, she heads for the bright lights of O’Connell Street and Teeling Street and perhaps, on a particularly adventurous day, Wine Street Car Park.

It’s rather a warming thought, that there is such solace to be found by Global Superstars in your own little town.

You always raise such interesting points, Ken. When WAS the first time I heard the term "downtown"? I'm really not sure. My parents still had very profound Lancashire accents when I was wee and so they'd say they were going "down t'town" not that I ever recall them saying that but it always puzzled me when people described going up and down flat streets. Who decided which end was up? I think rather than "town" they said "street" which, again, confused me because what made one particular street the street? (As an aside I saw a map once with a place called "Avenue Street" which I just loved. Who came up with a name like that?)