Jab and a Haircut – Two Bits 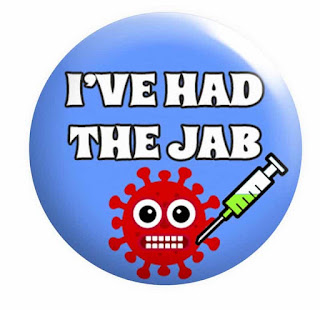 'Somebody' is now first-vaccinated, and 'somebody' has also been to the barbers.
What a difference a week makes.

I feel a little bit like Basil Fawlty when he had a rare win off that horse. For once in my life, I’m ahead of where I thought I’d be. I know it won’t last long but, just for now, I’m one-up in the game and loving it. I want to snatch my feeling away from anyone who tries to grab it.

I never imagined that I’d be this far on by now. Perhaps it’s because I often think that I am younger than I actually am. I had it firmly in my head that the vaccine programme wouldn’t get to folk like me until sometime in late June or early July. Ireland, being a small country, has not been as quick to get loads of vaccines as our neighbours and friends have. So, I was pleased to see the process gain some momentum and was happy to wait my turn. Then, suddenly, two weeks ago, it was my turn to register and three days later I had my date.

“Name?” The man in the high vis had a clipboard and was not afraid to use it. I told him my name.

He checked his sheet for a long time.

“You’re the last today,” he said. I was ten minutes early.

“Really?” I replied, deciding not to engage with him as to why it took him so bloody long to find me on his sheet if I was the only one left. I tipped him a wave, drove in, and parked up.

They were busy digging up the football pitch outside the hotel. I think they were making a car park out of it. It’s probably a useful metaphor for something-or-other but at the time I couldn’t be arsed to pursue it. Leave that one to Joni. I was here for one thing and one thing only.

Just because I was the last, I wasn’t alone. There was a queue in front of me to register and another queue beyond that. There were people behind me too, volunteers and car parking people who were getting their own jab. After the queue, which was speedy, I had to sit for a while in a little cubicle with two nice vaccinator women. They explained that, because it was near the end of the day, they were preparing the vials slower so that none would go to waste. That was fine with me. I was also formally asked if I was happy to be given the vaccine and they smiled when I said, without guile, that I was absolutely delighted. West of Ireland people tend to take their jabs and go home, I reckon. They don’t always express high emotion about it.

I’m left-handed so I got it in the right. I’ve always tried to give blood, when I’m allowed to, so I’m okay with needles, I think. I haven’t had too many, compared to other people I know and love. I touch wood after typing that, though I’m not in any way superstitious. Hang on while I… wave at that magpie… there!

The fifteen-minute sit-and-wait after the vaccine turned into a game of musical chairs because the rapidly emptying area was having its seating rearranged. I turned my chair one way to mimic what the staff were doing with all the other chairs and then I turned it back again when they changed their minds. It helped to pass the time.

And then I was part-one vaccinated. I felt a little high. I felt other things too, harder to describe. I felt sort of socially responsible if that makes sense. I felt less eased that I was now less likely to get the virus but much, much happier that I was doing my bit to help wipe out the darned thing. I felt like a brick in a big house that was trying hard to stay structurally strong and stable so that whole structure didn’t topple over.

I also felt prepared to feel a bit sick. I bought some Panadol and put them on the kitchen table where I could dive for them quickly. I didn’t get sick though, not even a sore arm. What I did get was grumpy. I was an exceptionally grumpy fecker for a few days. I actually think I still am. In the chipper last night, a woman was standing at the counter and waiting for her order that patently wasn’t ready yet. She was blocking my socially distant access to my own dinner. I shot her such a poisoned look that she fell back two full paces and apologised profusely. It seems I wasn’t just made grumpy by the vaccine; I was gifted temporary grumpy superpowers.

The next day was haircut day. I was a teenager in the decade when it was understood to be a kindness to the hairdresser to permit him to wash your hair. The narrative seemed to be that it provided a clean and pliable geography upon which the hair person could do their work. A part of me thinks it was a marketing ploy. Whatever it was, it’s a habit I’ve continued, waving the shampoo forward whenever I arrive. Even though a part of me thinks it’s a bit demeaning to all concerned.

Not in Covid Times though. Hairdressing needs to be a sparse and uncomplicated thing, in my view at least. So, I rolled up on Tuesday with a five-month head of hair that had been grossly over-washed. It was feather light, wispy, and buzzing with static electricity from the bottle of conditioner I had stolen from my wife.

Kieran the barber seemed relieved when I confirmed that I wanted ‘the usual’. I think people are coming back after months of follicle growth with notions of a new image and a photo of Jim Morrison in their back pocket. Not me. I just wanted a ‘Maxine Nightingale’; to get right back to where we started from.

If receiving the vaccine was transformative, getting the haircut was ten times more so. I left something quite murky and ill-fitting on the tiled barbershop floor, along with all that surprisingly grey hair. I caught sight of myself in a shop window as I walked back to work and, yes, I looked like a prat just like I always do. But it was a well-groomed prat. I could show a good face to world again and try to get on with things, carefully but well.

Reading back on this, I bet your own impressions of these things won't be vastly different from my own. There’s not much here that you won’t have lived yourself and felt yourself. But this is my diary, of sorts, and as your man Hamlet said, “Meet it is I set it down.”

Someday, in years to come, somebody might read over all these million words of mine and say, “Yeah, so bloody what?”

And that kind of makes it all worthwhile.

I've also had my first jab but that was two months ago and I'm nervously awaiting my second. Carrie’s just had her second. Hit her a bit harder than the first which she shrugged off. Me, delicate wee flower that I am, had a fever and everything after my first shot so I'm not looking forward to what's going to follow my second. It won't stop me but I worry.

The only time I've had a "usual" was when I worked in Royston. I used to get the bus into town and visit the Greggs on the corner of George Square where, while they were in season, I would buy two hot cross buns and eat them as I walked down Duke Street (coincidentally the street I was born on). Wonderful hot cross buns. Best in my life until they changed the damn recipe. Anyway after a bit they got used to me and I finally got to utter those magic words: "Usual, please." Never been one for bars and even when I did drink I never had a usual, Mostly I drank lager and lime but I went through phases. Haven’t been for a drink in probably twenty years. If Carrie has a new flavoured vodka I'll have a shot but that's me. Probably twenty years since I last visited a barber too.