Slightly Better Than I Think 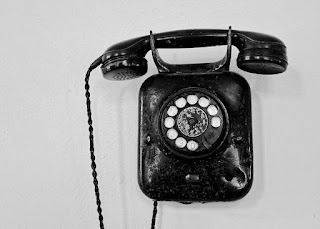 I hate changing phones. It never seems to work out easily for me. Despite all assurances, people’s numbers get lost along the way, things go missing. It’s awful. In fact, I hate the entire process so much that I hold on to my old phones far longer than I should. I hang in there until they are on their last legs.

When I showed up in the shop last month to get my new phone, the lady in the shop was bemused.

“You could have had a lovely new phone for free two years ago.”

I channeled the guy from a Foster Grants sunglasses advert from several decades ago. You won't remember him but I do.

So, my new phone is lovely and shiny and hi tech and everything but…

It has a defect.

I’ve been in denial about this for the last number of weeks but it’s there all right. In every call I make, at some point the person on the other end will say something like, “No, I’ve lost you, you’re gone… oh, wait, you’re back again.”

For a while I thought it was me. Perhaps I was somehow holding the phone the wrong way, covering the microphone with my finger or something. But it's gone on and on. It’s still going on now, I’m going to get it fixed soon. I went into the shop with it, but they were a model of absolute disinterest, which rather set my teeth on edge when I remembered how fawning they were when I first got the bloody thing.

“All we can do is send it off for repair and you’ll need to find a temporary replacement phone for yourself while its gone. No, we don’t have any.”

I’ve found an old phone belonging to my son so I’m charging that up now and will use it while my brand spanking new one hopefully gets fixed.

But that’s not the point. None of that is the point.

Last week, while in work, I looked at my phone and I wondered how I might prove there was an actual fault with the microphone. I could call up someone in the phone shop and talk to them until the fault kicks in but what on earth would we talk about? I’m not good on football. Plus, the fault probably wouldn’t ever kick in on a call like that because that’s how my life generally works.

I had an idea. I would set the phone to record while I was working at my computer and I would play some music on my Spotify then play it back and see when and if the sound dropout happened. So that’s what I did. After five attempts, I got a lovely recording of the sound level going down by 95% and then coming back up again. So now I’m getting all dressed up to go to the shop to get it all sorted out. Good, eh?

But that’s not the point either.

As I was playing back those recordings, I was enjoying the music all over again. Sometimes when working I listen to a playlist called ‘Peaceful Piano – American Songbook’ and I know every note of it so well that it doesn’t distract me or anything, it just helps me flow along. Anyway, I was listening to the recording of the piano stuff when I became aware of this other strange noise in the background of the track. It was an incessant clicking and mechanical whirring, incredibly fast and non-stop. I was puzzled by it for a few seconds. Was this the fault in the phone, the making of these noises? For a moment I really wasn’t sure.

Then I realised what it was. It was me.

While letting the phone record the piano, I had kept working on my computer. I was doing a little CAD stuff, as I often do. Drawing, editing, you know the kind of thing. That noise I was hearing was me clicking on my mouse and using the little wheel in the middle of it for paging up and down and selecting stuff. It was me all along.

And, man, I sounded fast.

I couldn’t believe it. In my mind I was just easing along, doing what I do, passably good but not by any means brilliant. On that recording, though, I was even a little bit amazing to myself. I was really flying.

It got me thinking.

Is it possible that we’re all a little bit better than we think we are? I generally tend to believe that I’m quite a bit worse than I think I am. I reckon I big myself up a bit and that I’m just pretty average overall.

I know. Probably not.

But thanks, faulty phone, for at least raising the possibility.

My phone is probably about sixteen years old. I have, as you might expect knowing how tenuous my grasp on time is, plucked that figure out of mid-air but it's in the ballpark. A long time by today's standards. And I have no intention of replacing it. EVER, if I can get away with it. I make maybe three calls a YEAR on it so, seriously, what would be the point? It's not even a smartphone. I took one photo with it and one video just to see if I could and have found no reason to do either again since. I'm not anti-technology (who else do you know who owns two desktops, two laptops and a tablet and uses them all?) but I've just never got into the whole phone thing. It's handy to have one for emergencies but how many actual emergencies do we have in a lifetime?

As far as fawning sales staff goes I tend to veer towards the cynical and keep my expectations low. Always a good way to avoid disappointment I find.