Saying Thanks to Nobody 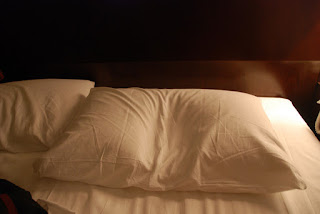 This will probably be a weird one.

It’s usually a sign that a weird one is about to come out when my mind keeps on saying, “Write something else, Ken, you can’t write that.”

So, you know, brace yourself or whatever.

When I go to bed every night, I have a very simple routine. I read. I can’t sleep without reading. Well, I probably could but I never try. Even it was four o’clock in the morning, I would still be reading before sleep. As I’ve described elsewhere (in what is oddly one of my favourite posts) there comes a moment when the words on the page meld into the words in my head and I start to read a strange dreamlike story that is not in the book. That’s when I know it’s time for a kip.

That might be a bit weird but only a bit. It’s not the actual weird thing. I’m trying to work myself up to that.

After the book is put down and the bedside light is switched off, I go to sleep. I tend to go to sleep really quickly and easily. The sleep may not always continue all night but it often does and I get there pretty quick.

But just as I’m heading off out, sleep descending, I do the weird thing.

I run through some of the best things that happened in that day. They are tiny things, often. Something funny, something sweet, something that deserves a little acknowledgement. Something to be grateful for. And I say thanks for them.

Then I go to sleep.

You’re right, of course, it’s not weird at all. It’s kind of nice really. Except… well, except to me. It still seems kind of weird to me. I like doing it and I think it sends me off to sleep in a good and positive frame of mind. But, yes, it’s still weird to me. I mean, who am I thanking, exactly?

That’s a simple question but there’s no easy answer to it.

I was brought up in the same religious regime that most of my peers were. A Catholic schooling with all the trimmings. Mass on Sundays and all of the holy days. Being a thoughtful kind of a young fella, more of that stuff may have rubbed off on me that it did on many of the others. But, then again, many of the others are probably still going to mass every Sunday and I am not. I like to think I know more about Catholic stuff than most of the people I know. I did years serving on the altar as a kid and I had a religious instruction teacher who delighted in briefing us on the minutia of the dogma, something that was always interesting to me.

So, yeah, that all makes sense. Easy, really. I’m giving thanks to God every night. Sorted.

The trouble is. I don’t believe in God anymore. I haven’t in a long time.

Even when I say that out loud, it sounds rather belligerent and confrontational to me. But it’s not. There’s a kind of dull sadness attached to my saying that, rather than any ‘stand up and I’ll fight you’ mentality. Something that was given to me as a child has been lost and I guess some childish comfort has probably been lost with it too. I think I envy people who believe in their God. They can derive strength from knowing they are not on their own in the universe. That someone will be waiting for them at the end of their road with some tea and possibly a nice piece of cake.

So, if that's the case, and it is, who do I talk to when I say thanks at night?

Well, the truth is, I know who it is and I will tell you but you’re probably not going to like it.

Yes, you may have guessed it. It’s God.

As I just finished telling you, I don’t believe in God. No great reason. At some point it just came to me that there is no tangible reason for me to believe that God exists and that there is a shed load of tangible reasons for me to believe that he/she does not. To think otherwise is to deny my own mind, my own reason. I’m not an atheist, at least I don’t think so. The definitions of those things mix me up a bit sometimes. I think I’m a cheerful agnostic. I’d be quite happy to find a wonderful existence beyond this one, where all those gone before reside. I just don’t think that’s going to happen. I don’t believe it.

So, about that thing I do at night, before I fall asleep? What the fuck is that about so?

I’m not sure. It’s a sleepy thing. My theory, for what it’s worth, goes like this: In that sleepy moment, where I am cosy and warm and all wrapped up, I allow myself a moment to revert to a time when questions and answers were easier and not to be challenged. I want to thank someone or something for the good things of the day, if only to acknowledge to myself that I am at a lucky and happy time of my life, to acknowledge that this cannot last forever and that I must treasure it while I can. Because there is nobody obvious to thank, I call upon my memory and find somebody there to whom I can express my gratitude. And I do.

So that’s it. This week’s weird thing. Before I go to sleep, every night, I appear to say thanks to a God I don’t believe in.

You might scoff and say, “Get over yourself, Ken. You obviously still believe in God and you might as well stop trying to convince yourself otherwise.” It’s a thought and I do sometimes think about it. But I don’t conclude that it’s right. When I look as deep as I can, I can’t see that inside of me. Once I even wrote about how I should perhaps just decide to be a believer, despite what I think. To make it an act of faith of the kind that religions often promote. I can’t manage to do that either, though. We can only be true to ourselves and what we believe, that’s all we’ve got.

I think the main proof that I don’t believe in whoever I thank every night is this. I never, ever ask for anything. No matter how dire the circumstance, I never seek any intervention or help from on high. I just don’t think help is there to be had. No, I just run through a few good things from the day, say a quick ‘thank you’, and then toddle off to sleep.

Who am I thanking?

God. Okay, right. Like you I was brought up in one of the world’s many organised religions. And it took me a long time to finally wriggle free of it. In fact I was in my late thirties. I’d left and gone back and honestly tried to make a go of it. There was one glaring problem: God wasn’t real to me. I was supposed to have, and I quote, “a personal relationship” with him (no capital H) but I couldn’t figure out how. I couldn’t relate to him. Finally I decided I lacked the wherewithal to be religious: I had no sense of spirituality. Life, for me, divvies up nicely into the intellectual and the emotional. On forms I’m occasionally asked what my religious affiliation is and I hesitate to tick either the “agnostic” or the “atheist” boxes because that’s not how I see myself. I simply don’t care if there’s a God. I don’t need there not to be one. I’ve given up on all of that. The same goes for opera. I genuinely tried for years to develop a taste for opera and I’ve never been able to but I don’t feel I’m missing out. Perhaps I feel a little defeated and I think that’s why I gave God a second chance in my twenties. I knew I was merely going through the motions but that was my way in: osmosis. I hoped, by adopting a routine, what was initially unnatural would become natural but it never did.

A lot of people who don’t believe in (or care if there’s a) God thank him and call out him during… ecstatic moments. It’s human to want to express gratitude when things go our way but the English language hasn’t quite caught up yet although “Thank fuck!” is growing in popularity. Really though you’re not grateful as much as simply happy time and unforeseen circumstance hasn’t had it in for you that particular day. Apparently that’s what gratitude is, “a feeling of happiness that comes from appreciation.” I had to look it up. You could thank your lucky stars if you believed the position of astronomical flotsam had any effect on the lives of anyone but really thanking blind chance is a good as anything else. You can be thankful for without having to be thankful to.

Nice post. When I read through this, I thought you were saying thanks to yourself - aren't you?

Jim: It's a useful thought - to be thankful without being thankful to anyone in particular. I hadn't considered that. I will not.

John: That's a useful thought too, though I rarely thank or congratulate myself for/on anything.