Jumping Up and Down for Sally 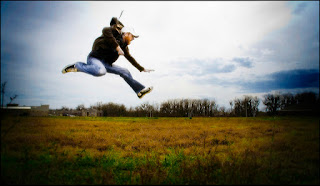 I want to jump up and down a bit for Sally. I think I just might.

I’ve been really good up until now. Understated, mature, that kind of thing. I’ve said things like, “That’s great, isn’t it?” and “Gosh, how really well deserved that latest award is.”

But, damn it all, it deserves a little more. It deserves a jumping up and down, doesn’t it?

I’ve known Sally Rooney since she was quite young and we’ve been pals for a long, long time. That might sound a bit odd because, you know, she’s young and I’m old but it’s not odd at all. We both liked writing and reading and doing plays and stuff and our families knew each other in a number of different ways. Sally was in - what was it? - I’ll say four of my plays and she came to the local writer’s group every couple of weeks. The first thing we did was write a little radio play together, her and a group of kids her age, and then we performed and recorded it. Once, at an open mic thing, when I was stuck for someone to read a little two-hander play of mine with me, she stepped in, sight-unseen, and read the shit out of it. The earlier posts on this very blog are peppered with her encouraging comments.

And she dreamed a dream of writing. And she wrote. And she beat the world with her writing. The whole damn world.

I’ve been good up until now but this is not a time for being good. It’s a time for jumping up and down.

I can feel proud too. Well, I feel proud whether I’m supposed to or not. I feel proud because I knew she was a great writer at a time where I think only she and I knew it. I used to joke with her that we were the two best writers in Mayo and I always knew I was only ever fifty per cent right but, man, was I ever fifty percent, right?

When she got into Trinity and was able to study English Literature, I was sure that something wonderful would result. I sent her a quote on one of these social media things, “Sail on silver girl, sail on by.” The Castlebar phase of the writing development was over. This fledgling genius friend of mine was now going away to soak up the best stuff that literature had to offer and to take it and meld it with her own natural brilliance. It was almost inevitable that something bold would ensue from all of this. Almost inevitable, mind, not inevitable. For these things to work out, it’s not enough to be brilliant. There also has to perseverance and commitment and faith and hope in copious measure.

Hang on. Let me jump up and down for a minute.

“Look at this git”, some might say, “prattling on about his involvement in this wonderful story. Trying to get a few more clicks on his blog off the back of the success of his friend.” Nah. You’re missing the point. I’m not suggesting I actually did anything. I didn’t do anything. When Sally came to the writing group as a teenager, she was already a fine writer and the seeds of the work she would come to do were already well planted. So, no, I didn’t do 'nuttin' for nobody' and I know it. But, wait, strike that, I did do one thing. I saw her coming, from a long way off, I saw that. I can be pleased about that, can’t I?

Another part of the joy is that Sally remains such a lovely person through it all. She is kind and self-effacing and generous and considerate as well as being colossally smart. And yet another part of the joy of it all is the thread of steel that runs through her. An unerring sense of social injustice. A willingness to pursue the argument when she knows she’s on the right side of it. A barely contained rage against many of the awful things in our world.

She’s a good person and good people don’t always beat the world like this.

And those people who look at Sally now and who say, “She’s going to do amazing things in the future.” To those people, who I know only mean well, I have to say, “Wake up!”. Look around you. Totally amazing things have already been done. If Sally never wrote another word, she has already written herself into the league of literary heavyweights. You read her books and the stories stay with you but it’s the building blocks of those stories, the thoughts, the phrases, the ideas, these are the things that tickle our subconscious and let us know that there is more going on here than just a narrative.

Sally’s life isn’t perfect. That’s not any kind of insight. Nobody’s life is perfect. There will be stress and worry and pain and trouble, just as there is with all of us. Wanting to be a writer and then becoming a wonderful one does not guarantee anyone a blissful existence or any kind of happy ever after.

But it is still something amazing. Something rare. An ambition fulfilled. A battle won. A real-life dream-come-true. It may not be everything but it is certainly something. Something really, really big. And it warrants a little more than the polite pleasure I’ve been expressing up until now.

It warrants a bit of jumping up and down.

I just couldn’t be more delighted.

My sister had two best friends growing up one of whom became an actress. She still is one with seventy-three credits in IMDB. I won’t say who. It doesn’t matter who. Suffice to say she’s never stopped working since 1986 and in the acting world that’s something in itself. In the early days she’d no problems getting her kit off and I remember quite clearly the first time I saw her naked on the big screen. It wasn’t, of course, the first time I’d seen someone nude in a film but it was the first time I’d seen someone I’d sat in a pub and flirted with. And I’ve never quite got used to seeing her in the buff although it’s been a few years now and she can be picky. Still, for all she’s had more than a few lead roles, I struggle to think of her as a star. I still see the lassie that used to hang around with my wee sister. I’d like to think fame hasn’t changed her. I think what I’m saying is I don’t want fame to have changed her but I expect life has. My wife never calls her by name. It’s always “your sister’s friend” and I kind of like that’s what she’ll always be although I’m sure they’ve not spoken in thirty years. My sister’s fault but that’s another story.

None of which has anything to do with Sally Rooney but I think from now on whenever I see her name I’ll read “Ken’s friend.”