Dicing With Story - Fut and Cucaracha

We used Rory's Story Dice to demonstrate the elements of a story and then we took one final throw of the dice and made up a story based on whatever the dice gave us. The dice gave us a Foot and an Eye and a Cockroach and a Book and a House. As ever, I am amazed at the ingenuity and invention of our young folk.

This is the story we all came up with. Full credit to my co-writers will follow shortly, both here and on The Linenhall Website. 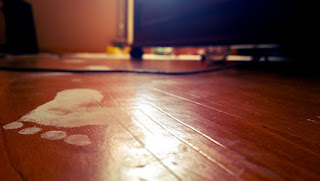 Once upon a time…

No, wait, I don’t want to say ‘Once Upon a Time’ because then people will think this is a fairy story when, in fact, it is a story of gained mutual respect and co-operation.

I can see why people use ‘Once Upon a Time’.

Once upon a time, in a decidedly un-enchanted forest just outside of Cong, in County Mayo, there lived a Fut. If you stand on the topmost roof of Ashford Castle and strain a bit, you can still see the Fut’s house. It is surrounded by trees and the trees are surrounded by fields. So next time you’re up on the roof of Ashford Castle, look north and scrunch up your eyes really tight and you’ll see the Fut’s House.

“Wait,” I hear you cry, which is odd because my computer speakers are turned right down, “we don’t care where the Fut lives or how to see his house. What on earth is a Fut?

A Fut is a creature which is mostly comprised of one eye and one foot. Yes, it has a brown squidgy mass around its tummy to hold these two organs together but that is often disregarded. If you met a Fut on the High Street (unlikely) it would be the large green eye and the huge scaly foot that you would remark on first. The brown hairy bit in the middle would go largely unremarked-upon.

Yes, yes, only this is not a Fut biology lesson, it is the story of The Fut and the Cucaracha. We could jump down a rabbit hole of Fut physiology and, interesting and all as it might be, it would not get us to the story, the crux of the matter.

Let it suffice, then, to say that the Fut hops about the place and eats by shoving things up the gap between its upper eyeball and its upper eyelid. We will not discuss the function of the lower eyelid at this juncture because I’ve just had a sausage sandwich and frankly I’m not up to it.

So, yes, the Fut lived in the house which was surrounded by trees which was in turn surrounded by fields and it was very very happy. It watched Netflix with the sound turned down and did a sort of hopping Pilates to keep itself in trim. Life was good in that spectacularly un-enchanted wood near Ashford Castle in Cong.

Until the Cucaracha came along.

Everything changed when the Cucaracha came along and not for the better either.

The Cucaracha came out of the un-enchanted forest one fine morning and she liked the look of the Fut’s house and she decided, there and then, that she would stay. She was really just an ordinary common cockroach like the one you might find under the sink… or is that just me?

This ordinary cockroach had heard something somewhere. Probably up at Ashford Castle but you didn’t hear me say that. She had heard that the Spanish word for Cockroach was Cucaracha and she liked that. She has also heard a tune about a Cucaracha and it was very rhythmic and catchy so she decided to make it her theme tune. It’s the kind of a tune you might hear on ‘Strictly come Dancing’ on the nights when they all wear multi-coloured pom-poms up their arms. The rhythm to the tune goes dah-dah-daah-dah DAH, dah-dah-daah-dah- DAH.

“Why is he telling us all of this?” I hear you cry. The answer is simple. This is the crux of the matter. The Cucaracha and her dance/walk is the reason we are all here, telling and listening and reading.

Allow me to explain.

Every morning, at 5.30am, the little Cucaracha took its morning run. Okay, not quite a run, more of a scuttle. And she did it on the concrete footpath that ran right around the Fut’s house.

It drove him completely loopy.

Every morning, the Fut ran out and tried to stamp on the Cucaracha with its one big foot but the little bug was too brittle and the foot too soft and scaly to exact any damage at all.

And so the Fut’s nightmare continued every day. Interrupted sleep, endless rhythmic scuttling. We have to feel sorry for the poor Fut, I think.

But the Fut was a vengeful beastie in his own way. He ordered a book on Amazon Prime which was called ‘How to Kill a Cucaracha if You are Only a Foot’. To be honest, it seemed right up his street. The book came and the Fut started to read it.

‘Wait’, I hear you cry, ‘Stop, Cease, Desist’. The Fut is only an Eye and a Foot with a hairy bit in the middle. How can he find a book and order it and take delivery of it? How can he do all these things?

All right, all right, I’ll take a moment and explain.

Not many people know that Amazon Prime has a Morse Code service where you can order things via the medium of Morse Code. The Fut blinked his order in Morse code into his computer with his one massive eye and the book arrived by next day delivery. Amazon Prime also have a ‘First Page’ offer where they not only deliver the book but they also unpack it for you and leave it open to the first page. It’s a service for extremely lazy people and it costs a packet but it also happened to suit the Fut very well. He got the book and there it lay on his carpet, open to page one.

He started to read, with his one good eye.

Page One said the following:

HERE IS HOW TO KILL A COCKROACH IF YOU ARE ONLY A FUT.

Then it said the following:

PLEASE TURN OVER TO PAGE TWO.

That’s all it said.

The Fut tried to turn the page over but he couldn’t. The Fut’s foot was not agile enough for the task and his eye was worse than useless. The information he needed to kill the dratted Cucaracha was probably on the very next page but it might as well have been a million miles away on the planet Foozebod.

The Fut took his one good eye and he wept. He wept from frustration and from sadness and from a profound lack of early morning sleep.

As he wept, his front door opened a tiny bit and the Cucaracha scuttled in with her little dah-dah-daah-dah DAH rhythm. She had heard the Fut crying and had become concerned. The Fut had his back to her and she wondered what to do because she knew that The Fut really just wanted to squish her.

As she wondered, she spied the book on the floor and she read the first page with interest. Here was useful information for her. If she knew how a Fut might kill a Cucaracha like herself then she could possibly devise a defence against it.

She stuck her little cockroach-horns behind page one and she flipped over to page two.

He hopped to the side of the book and prepared to deliver the final blow.

The page had turned… to PAGE TWO.

How had that happened? The Fut paused. He so wanted to squish the Cucaracha but… but... PAGE TWO looked so interesting and inviting.

He started to read instead.

Side by side, the Fut and the Cucaracha sat and read PAGE TWO. The Fut had never seen the second page of a book before. It was really quite interesting. When they were finished, the Cucaracha did her little horn trick and flipped the page to PAGE THREE and on they read. And on and on until the failing light meant that even The Fut’s large eye could not continue.

Then they both laid down and slept. They slept so long that Cucaracha turned its early morning scuttle into a mid-morning scuttle and that allowed the Fut to catch up on some much needed shut-eye

And that is how they became friends. All through the evenings, they read together until the light dimmed. They read all the books that The Fut ordered on Amazon Prime by Morse Code and which the Cucaracha never could. The Cucaracha earned her keep by turning the pages, which the Fut never could.

They read all the Harry Potters and all the Twilights and then moved on to some classics like Pride and Prejudice and Moby Dick.

They read and they slept and they were company for each other and a help to each other throughout the rest of their days.

And they all lived…

No, wait, I don’t want to say ‘They all lived happily ever after’ because then people will think this is a fairy story when, in fact, it is a story of gained mutual respect and co-operation.

If there's one thing all writers share, from joke tellers to the greatest of our novelists, it's this: They want to know what happens next. It obsesses readers too but it's different for them because they invariably have a completed text before them and they know it'll come to some sort of a concusion and if it doesn't they feel they've a right to be royally pissed off at the author. They never have to decide (except in those Choose Your Own Adventure books that used to be popular in the eighties) what happens next. And, of course (you and I both know this), sometimes is goes nowhere or you write yourself into a corner. But when it doesn't, when, by some fluke, all your ducks end up in a row... ah, then!

I don't ever rememebr being taught to write at school. Penmanship, yes, but not how to craft a story. We were told to write stories and we did and they were mostly crap and chores to get through. (I do remember turning in one called 'The Curse of the Were-wig' for which I got an F because it was nothing to do with the assigned topic.) I have no idea how I discovered the joy of writing. But I do wish I'd had access to a bloke like you, someone to demonstrate and guide me through the pleasure of doing it myself. I had the same issue with my music teacher. The first thing I wanted to do when I sat down at a keyboard was make it do what I wanted to. It wasn't enough to play other people's tunes. But I ended up having to teach myself that too.

Fun story. The kids should be well pleased with themselves. I'll get to this week's eventually. I'm behind on everything this week.