Chatting to Sally Rooney in The Linenhall 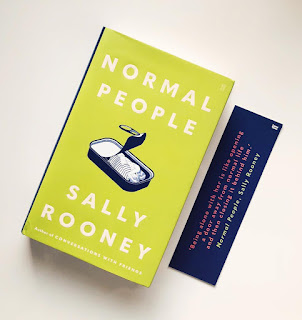 On Friday evening, I got to chat to Sally Rooney about her novel ‘Normal People’ in one of my favourite places in the world, The Linenhall Arts Centre here in Castlebar.

Sally radiates such brilliance that you can’t help but feel a bit brilliant yourself when you’re sitting beside her. She answers questions in a way that makes the questions seem better in retrospect. It’s quite a feat. I had a great time. I love the book and Sally and I go back years and years so it was fun on all kinds of level for me.

Here’s an extract from my intro, on the night. You mightn’t bother with it, particularly as I seem to have taken all the jokes out. That’s fine, I don't mind. I know there's a chance that I’ll find it here in years to come and it will spark a memory and raise a smile for what was a pretty special evening.

When you read a certain kind of book, it’s all there for you. It’s all right there in between the covers. You take it, you read it, you move on. I’m thinking here of the ‘Jack Reacher’s or the ‘Agatha Christie’s (all of which I read). Everything you need is in there.

But there’s another kind of book.

There’s the kind of book where you are required to put a bit of yourself into it as you read it.

Sally’s new novel ‘Normal People’ is one of those other kinds of books. You have to invest something of yourself into it as you go. And that’s great… that’s wonderful… until you have to tell people what you think of it. Because, then, you’re not just telling them about the story you read, you’re telling them about your story too.

There’s a film by Martin Scorsese, ‘The Colour of Money. It’s a sequel to ‘The Hustler’, which is an almost perfect film. In the film, when they talk about things like baring their soul or exposing their inner feelings they don’t say ‘I’m baring my soul’. What they say is, ‘I’m showing you my ass’. And that’s why talking about real literary fiction can be a bit tricky. You have to, kind of, ‘show your ass’ in order to do it.

It’s not always easy to talk about that.

Not everybody is going to love this book. So, when I tell you that I love this book – and I do, I really do –then I’m already well on my way to showing you my ass. I read it very quickly the first time. I had to. I wanted to know what was going to happen to these two people. Marianne and Connell. To be honest, I wanted to know that it worked out all right for them. I became invested in their outcomes.

Then I read it again, a few months later and, now that I could take my time, I could ‘enjoy the view’ better. I could appreciate the craft and the wit and the burning intelligence that is at the heart of the book. Much has already been written in the reviews about these things. One thing that I think has been a bit neglected in the reviews is the amazing quality of the Storytelling. I’m a bit of a story teller myself. If you know me, I’ve probably told you a story. And, for me, this story is brilliantly told.

When I had finished the book for the first time, I asked myself. “What was that about”. But I did it in a good way. My Dad used to do it in a bad way. He used to watch something on telly and when it was over he would say ‘Well… what was *that* about’. I didn’t do it like that. I challenged myself to identify what I made of it. To sum it up in a couple of words. Not for you, and not for Sally. Not for anyone else but for me. I had read it, I had left some of my own DNA on the pages as I turned them.

What had I come away with?

The first thing I came up with was kind of interesting. I said to myself, “Yes… this book is about how difficult it is to talk about how we really feel. It’s about how we can change each other’s lives in small ways but deeply and enduringly.”

I thought that was pretty good. Until I thought about it bit more and I went, “Ah, no, Ken. No no no. That won’t do at all.”

And I think Sally would like us to do that. The best fiction sparks us and incites us and challenges us to react to it. But the book industry itself, in informing us of a book, often tries to inform us what to think about the book too. I don’t know but I bet that Sally would prefer someone to grapple with this book and come out hating it than to read it passively and come out loving it simply because that’s what we were told to do.

Do you want to hear them?

(I’m showing you my ass here…)

And I was talking to somebody sensible about this and they were saying, “Ah, yeah but Romance is not a big thing, it’s light and frothy and impermanent.” But not to me it isn’t. To me, Romance is like the life blood of the universe. It is fun and hopeful and warm and… loving. I suppose, most of all, it’s loving.

And it’s there in both of Sally’s books, for me to find. Life is hard and cruel and tough and unfair and brutal and… not kind. But, still, there is always this possibility of Romance. And that’s my view. It’s not on the back cover of the book. It’s not in the Times review. It’s just here in my head.

And there’s my ass right there. ‘Cos I am a Romantic, a hopeless Romantic, and no matter how awful things get or how hopeless things seem, there is always the slender chance of a little light - a little love - creeping back in.

I think that’s why I love both of Sally’s books so much. They are unendingly smart, unflinchingly real, unfailingly true. But, like a series of sketches by an old master on a wall in a gallery, they leave me room to slide my own life and my own experiences in between the pages and make them mine.

Sally’s new book is about many things, Love, Class, Politics, Communication, Lack of Communication, whatever you’re having yourself. Perhaps it’s mostly about Normal People. Who we are definitely not.

Except, maybe, we are.

I made a start on Conversations with Friends but it asked too much of me. Which bothered me because I’m also the kind of writer who asks his readers to step it up a notch. So I put it aside. And now here we are, a year later and she’s gone and rattled out another one. And not merely another one but “a future classic” if The Guardian reviewer is to be believed plus a book that got a fifty-five-year-old Irish playwright to show us his bum if only metaphorically. (And thank God for that.) But what really narks is she’s only twenty-seven. Twenty-ruddy-seven! At twenty-seven I hadn’t even managed to set the poetry world afire. When I was twenty-seven Sally Rooney hadn’t even been born. Doesn’t she make you feel old, Ken? You hopeless Romantic you. And just a smidge jealous.

It was the essence of one of my questions in the chat afterwards, how the book made me feel old. Everybody 'feels' so much (and so hard) in it. I felt like an old tongue who doesn't taste much anymore. Not jealous though, there is no limit on the amount of brilliant people there can be in the world. Just cos she is one, doesn't mean that you and I can't be one too. :)