The Joy of Not Liking Something 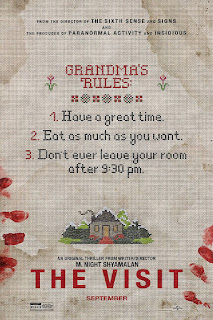 You could comfortably conclude that I am a terribly easy person. I seem to like almost everything I put myself in front of, at least in terms of books and films and TV programmes and such. I appear to be a complete pushover.

That’s no accident. By the ripe old age of 54 one has learned a little about what one likes and can generally see some signals or portents about what one will like even before it arrives. Add to that the fact that I don’t really need to be wasting my time on stuff that I probably won’t enjoy and there you have it; I am a person who seems to like most of what they consume, if only because they mostly tend to consume what they like.

This has a sort of logic to it. But nobody wants to be a complete pushover. In a world where authority and camaraderie often seem to be attained by the shared experience of loudly hating stuff, the person who likes a lot of things can seem tame and willowy by comparison.

What a joy, then, to happen upon something that I can cheerfully declare was just a load of old bollocks. Doubly so because the thing in question seems to have been quite widely admired and enjoyed. Finally I can try to regain some of the Gravitas I must have lost in the wake of a long run of continuously enjoying things.

This thing I didn’t like very much. No, wait, strike that… I hated it, I bloody hated it. (Yay!). It was a film on Netflix. I didn’t set out to hate it because, as I was saying, I tend to migrate toward the stuff I think I’ll like. It was a big commercial movie and I almost (almost) went to the cinema to see it (for it promised a particularly cinematic experience) and then I almost (almost) rented it on my telly because I was keen to see it. So, yeah, I settled down on my couch in full expectation of another evening of enjoying stuff and this further denting my reputation as a meaningful person.

But, no, joy of joys, it was feckin’ brutal.

Which enables me to do… this:

'The Walk', directed by Robert Zemeckis tells the story of the extraordinarily brave man who walked a wire between the newly constructed Twin Towers in New York in 1974. A cross between a loose biopic and a caper movie, it dramatised the genesis and execution of the dream mission.

It was brutal, lads, completely brutal.

I hear that the documentary ‘Man on Wire’ mines the same material very effectively. I might seek it out but not before I give myself some time to recover from this effort.

Which was pants, lads, utter pants.

Wait, I’m overplaying this ‘didn’t like it’ card. It’s not that bad, I just didn’t like it and I thought I would. I’ll stop fooling around for a moment and try to be fair to it.

It’s a fascinating story, that’s why I was drawn to the film. The man, in real life, did an extraordinary thing, a thing that has unavoidably altered somewhat in the context of everything that has happened to his chosen arena since. The story, which in a simpler world would eternally remain one of heroism, showmanship, and human endeavour, has been moulded by history and aggression into an sort of an elegy for a time which we can never see again.

Because the script is the only part of a film I might shyly claim to have any insight into, I do feel it is the script which has failed this film the most. Perhaps its creation was hampered by the presence of a real life protagonist and a series of truths which required a certain form of representation. I don’t really know. What I do know is that the film seems to be erected very tall on a crumbling mess of a screenplay that is at turns turgid, obvious, and unengaging. The moment the central character appears and starts a first person narrative (something that speckles its way through the whole film) I knew we were shot. Ben Kingsley turns up then slips away again, hardly making a dent in the proceedings. Joseph Gordon-Levitt is made up and costumed to give the impression (to me at least) that it is Hurricane Higgins up there on the high wire and, worst of all, the climactic wire action is rendered ordinary in ways that I cannot start to comprehend. For this latter point, I will acknowledge that I was watching on my living room telly and that the 3D 'Megamax' Cinema experience of these scenes may have been entirely different.

The whole film seemed to be far too in thrall of the truth of the escapade to ever shed its inhibitions and fly fearlessly into the realms of true cinema. It felt like a TV movie of the week when the daring, the balls-out fearlessness, of the central exploit seemed to deserve so much more.

How doubly wonderful then to go from this nirvana of dislike of a much-liked film to finding another film. This time one that seems to have been widely reviled but which I, wait for it, actually liked quite a bit. It’s so much more fun to like a film when everybody else is hating on it.

This time is was ‘The Visit'. Patricia and I watched it last night.

It wasn’t perfect but I thought it was really pretty good… pretty, pretty good, as Larry would say.

It’s written and directed by M. Night Shyamalan and you know how we all love to diss on him since he slipped down a hill from 'Sixth Sense' and 'Unbreakable' and such.

This one is done in that ‘found footage’ style that can really be groan evoking when you’re not expecting it. It gets by though. Again, here, it’s the script I would draw attention to. I’m reminded, oddly enough, of the original Karate Kid and how that script was held up at the time as a sort of template for what a  good classic three act structure screenplay could be. M Night’s screenplay here is a sort of a three act template too. It ticks all the boxes of exposition, reversal, outer motivation, inner motivation with a little pinch of heart in there too. Oh and it’s just as nasty as it could possibly be without being totally nasty.

To expand a little further. I’ve always seen The Exorcist as a story about fear of old age and infirmity. I think I may be alone in that but, look, the little girl turns into a seriously ailing old person, vomiting, incontinent, spouting abhorrences and totally bed-ridden. The young priest is wracked with guilt over his own perceived neglect of his ageing mother. The most effective narrative horrors we meet are not imaginary monsters behind wardrobe doors, they are storytelling manifestations of the things which give us a pause and a shiver in our real lives. For me, The Exorcist hit home most with that 'aging and infirmity' angle and the demonic trappings always seemed like so much window dressing. This film, while nowhere close to being in the same league as The Exorcist, mines the same vein of fear and with some effect.

As I sit here and think of 'The Visit' I am reminded of Steve Martin after he finally gets to consummate his marriage to manipulative Kathleen Turner in 'The Man with Two Brains'.  Steve says, “I never knew it could be like that... so professional.” There is something unerringly ‘professional’ about M Night’s script. You know you are being worked and manipulated and that’s perhaps the niggliest problem with the film. It never feels much more than an exercise in jitters and entertainment… except just now and again when that Exorcist vibe lands.

So there you have it. This week, I liked a movie and I disliked a movie. I bet if you watched them you would probably reverse my view, liking ‘The Walk’ and disliking ‘The Visit'. That's okay.

It just goes to show how damn edgy and interesting I really am.

Okay, that was an interesting read. I mean it was interestingly written—that was your bit and you did your usual stellar job—but the reading bit’s mine and this time was more interesting than usual. When I began reading I assumed it was going to be the M. Night Shyamalan film you were going to diss because I couldn’t remember anything about The Visit. I actually assumed it was a new film and not one from 2015 which puzzled me because I do tend to give him the benefit of the doubt; even a bad film by him is generally watchable although never quite as watchable as a bad Woody Allen film. (Carrie and I have just finished watching the second season of Wayward Pines for instance where he served as one of the executive producers—he also directed the pilot—which wasn’t bad, especially the first season and the twist is genuinely surprising.) I looked up The Visit and wondered how I’d missed it but here’s the thing: I’ve seen it. It wasn’t until I was halfway through the synopsis in Wikipedia it started to some back. And only the gist. Don’t ask me for any details. So I guess the film wasn’t especially memorable. Or maybe what the problem is is I watch so much than nothing has the time to lodge because I couldn’t tell you much about… well, you pick the superhero film made in the last twelve years. And there isn’t one I’ve watched—or wanted to watch—twice. When did I ever find the time to watch Blade Runner ten times? And, seriously, I could sit down right now and watch the original again, any cut. Can’t wait to see the sequel.

I’ve just had a look at Shyamalan’s filmography. I’ve seen them all apart from The Last Airbender and Split which I’ve heard good things about but don’t ask me what they were because I’ve forgotten. I expect I’ll get round to it the next time Carrie goes to the States which’ll probably be the start of next year. (She took this year off.)

I haven’t seen The Walk. Nothing about it calls to me. The same goes for Man on Wire. These are films that try to make something out of nothing. Take Calendar Girls, for example. Members of the Rylstone branch of the Women's Institute discreetly pose nude whilst engaged in traditional WI activities. That’s it. That’s the story. And a fun newspaper article it makes too—and, from all accounts, quite a fun calendar (£55 on eBay)—but that’s it. This is where so many TV dramas like The Moorside (based on the 2008 disappearance of nine-year-old Shannon Matthews) fall flat. I’ve yet to watch any of the American Crime Stories to see if they make a better job of it.

As for not liking stuff, Carrie and I have so much TV backed up to watch we’re starting to become less and less tolerant of… well, crap. Fairly often we’ll give a show a season but I can see an increasing list of shows where we keep putting off watching a second series. And then suddenly we have a third and even a fourth which we, let’s be frank, will never ever watch. A part of me feels guilty for starting something I’ve not finished but, seriously, how will watching the last four seasons of The Vampire Diaries enhance my life? (And don’t forget there’s then the four seasons of The Originals to make time for too.) Life’s too short.