In Praise of Solar Bones by Mike McCormack 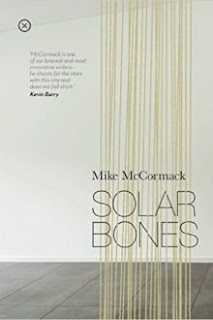 I think ‘Solar Bones’ by Mike McCormack is a really fine book and I just wanted to tell you that.

I don’t think I’m going to embark on some attempt at a high brow review or anything like that so rest easy. For me, ‘Solar Bones’ is a book about what it is like to be a man and to exist within the various guises that come with that title. Guises that include those of Father, Husband and Son.

What sets it apart, in my opinion, is the level of honesty and authenticity that Mike has tapped into. The central character is like a real man in a real world. Ironically, he is neither of those things but I don’t want to dwell on that. Mike embeds his novel in a real landscape with real politics, real history and real concerns. As a result of this, when he deals his blows, the blows fall hard and true and they leave a mark. At least they did on this particular man.

I first became aware of Mike McCormack when I came home from London for a visit in the mid-nineties. I was driving along somewhere when the afternoon arts show came on the car radio. The then-proprietor of the show, veteran broadcaster Mike Murphy, was singing the praises of a new short story collection by an exciting new young writer. I sought out ‘Getting It in the Head’, bought it and brought it back to England with me. It make an impression. Here was someone to watch out for.

If you’ve heard only one thing about Mike’s latest book then it’s probably the fact that there are no full stops in it. People have made a big deal about this. In fact, it’s not a big deal. It’s certainly not any kind of barrier to reading and immersing oneself in the book. Some people have called it a single run-on sentence and maybe, in some technical world, that’s what it is. I think that is misleading though. I think it suggests a massive block of text running through hundreds of pages, deep and impenetrable. Not so. The writer employs paragraphs and spacing to present a manageable flowing text which does not impair the reader’s passage through the pages. In fact, this device successfully evokes a flow of consciousness that is slightly other-worldly and random and that serves the story well.

When I talk to people about the book, we tend to recall events and moments from it much as we would if we were recounting an actual life. The characters who accompany the man through his life are vividly sketched. Strong wife, distant son, artistic daughter are all people in their own right. Despite these characters being ‘told’ to us by the man, they quickly step out of his description into their own space. His father, for me, was particularly well drawn. The strong inclination now is for me to start to describe him for you but no, better you go and meet him yourself.

One thing I wonder. The book is set here, in my place, in my locality. Located, as it is, firmly within my own stomping grounds of Mayo and Galway City, the narrative seems doubly true and convincing on account of my knowing the turns he makes on the road, the bench he sits on in his lunch break. It makes things perhaps more visceral than it might be for someone who has never set foot in the West of Ireland. So I wonder, does that matter much in the end. I have concluded that it doesn’t. At the moment I am reading a book by Ron Rash called ‘Above the Waterfall’ and I am enjoying it very much. I don’t know anything of the setting. The Appalachian Mountains, Virginia and Shenandoah are nothing more than romantic far off places to me. Still the story and the people in it leap up from the pages and grip me. So, I think, it will be for Solar Bones. I may get a 1% kick from knowing a particular derelict hotel but the story will engage where ever you are.

If I could have had one thing differently, I would have had a cover on this book with no text on it other than the title and the author’s name. I feel that the text, such as it is, subverts the expositionary nature of the book and undermines, at least in a small way, the potential impact of the story telling. If you can, read the book without reading the cover. Then, afterward, you can read the cover all you want and tell me if you see what I mean.

That’s only a small thing.

Solar Bones made me feel mortal like no other book before it has managed to do. This is how the book left me feeling, as I closed the back cover. Mortal, finite, destined to end up nothing more than a memory. Because that’s what I didn’t say up until now. Mike McCormack is a wonderful writer but he has never been an easy writer. Even back in Mike Murphy’s day, he was dealing with harsh truths and not flinching from the candle. This book is excellent but it may scorch you a little, as it did me.

It’s worth the burn.

I was going to say I’ve never heard of him before but I think I recall another review that described the book as being a single sentence which piqued my curiosity I have to say. I’m betwixt and between when it comes to unconventional punctuation. I like the idea of it but whenever I’ve tried it it’s never pleased me. I like punctuation. There aren’t enough squiggles and dots as far as I’m concerned. But then I’m a musician, albeit a lapsed one, and I just love musical notation. Someone once stripped some famous novels down to just the punctuation. I’ve toyed with the idea of doing that to The More Things Change. I think it could be fun.

I’m with you about not reading much before you start a new book. An odd thing for a reviewer like me to say but I’m being honest. I like to read reviews after I’ve finished a book which does seem a tad pointless but since I’ve only Carrie to talk to about what I’ve read it fills the gap. More and more these days I pick books almost at random as long as they’re short. I’ll pretty much read anything as long as it’s under a couple of hundred pages and I do know that means I’m missing out on a lot of great literature but I’m also reading a lot of great literature; it just happens to be on the short side.