The Mixed Message I Get from the New KFC Advert 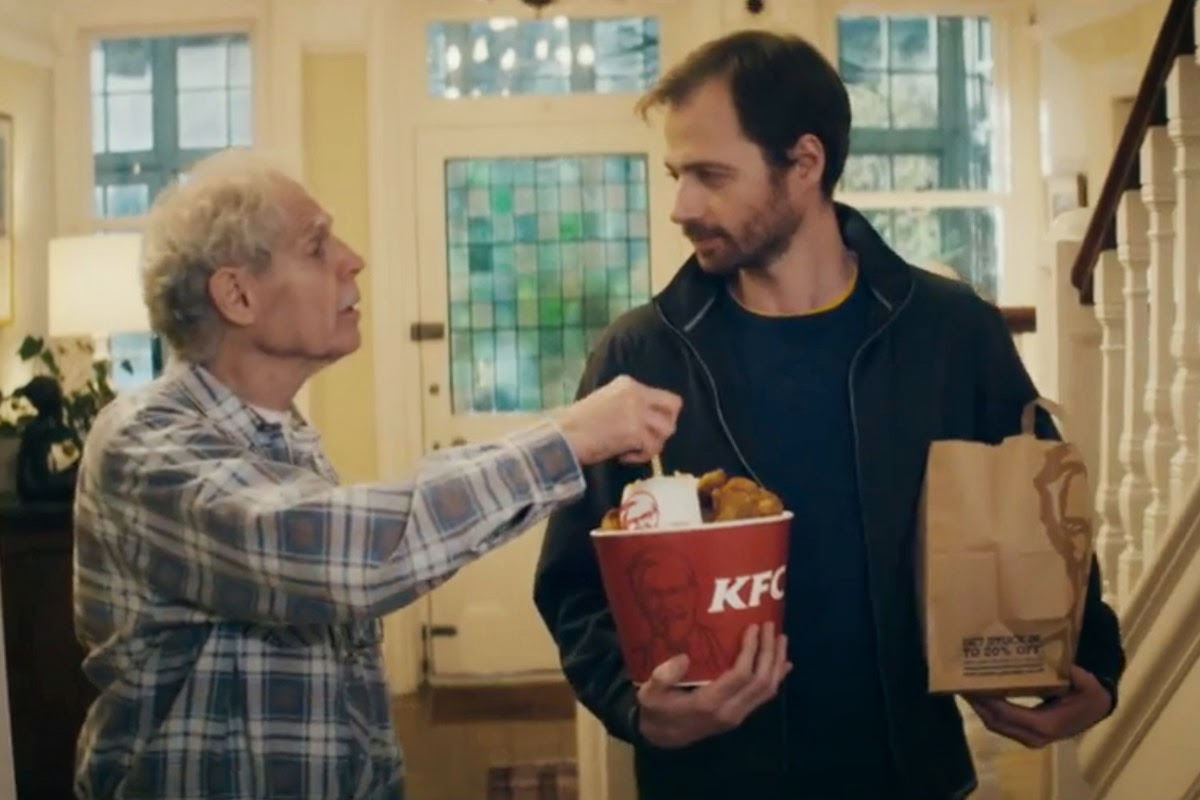 Maybe this new KFC Advert only appears here in Ireland. If it does, then this little essay-ette is not going to make much sense to many people. Still I always try to write about what’s on my mind and this is it for this week. So what can I do? I gotta be true to me.

Yes, there’s this new advert for KFC on the telly and, for me, it’s sending out a rather confused message or, at least, I’m receiving a mixed message from it and, yes, I’ll grant you, that’s probably a completely different thing.

I’m saying ‘KFC’ but, in my head, I’ll always be giving it its full title of ‘Kentucky Fried Chicken’. We never had one in my home town when I was growing up but when I moved to Dublin as a student I became a sucker for their three pieces with chips.

Enough with the history. Let’s talk about this advert.

Have you seen it? There’s this kid of about eight or nine and he looks out of his upper floor bedroom window and he sees a car pull up outside and the guy in the car is bringing the KFC home for tea. So the kid bails out of the bedroom and starts heading down the stairs at a gallop. Oh did I mention that it’s, like, The Fifties, cos there’s an upbeat ditty playing that is faintly reminiscent of the Benny Hill chase music.

Here’s the thing. As he heads down the stairs, this lad starts morphing into slightly older versions of himself. First he’s a teen, then a young man, then a dad… and so on. By the time he gets to the bottom of the stairs, he’s a granddad and the KFC has arrived at the front door and he gets to sit down with all the generations he has begot and nibble some chicken with them.

It’s kind of good, in a KFC advert kind of a way. It zips along and the themes of family, constancy, and time-passing are ones we can all identify with.

It’s what the voice-over man says at the end, that’s what throws me. I won’t quote him verbatim but essentially what he’s telling us is that Kentucky Fried Chicken has now been feeding us for over forty years.

What the heck happened on the way down?

Granted, he’s a sprightly enough looking septuagenarian. There he is, chowing down on a thigh-piece and having the crack with everyone. He’s looking all right. Except for that one small thing…

If KFC has been feeding him for forty years and he was eight to start with, then his diet, secret herbs and spices or not, has withered him atrociously. It’s nearly doubled his ageing process. He’s like that little guy in ‘Blade Runner’ and the advertisers have paid a fortune to show us this poor man and the terrible price he has paid for his weekly Saturday Night snack box.

So that’s the message I get from this KFC advert. “It’s nice but it will age you. Be warned.”

I was genuinely confused by this advert so I went and did a little YouTube research. The British and Irish versions of the commercial seem identical, except for one small matter. The British one says that KFC has been around for over seventy years while our one says forty.

That explains it. We’ve only had KFC for forty years so the advert had to be tweaked. But, hey, what a tweak it’s been.

The next time I stare down a Dinner Box and Diet Coke, I’ll be covertly considering my own mortality and wondering if I’m about to snack two years of my life away in one fell swoop.

It won’t stop me, obviously.

My take of the ad—which I’ve not seen—is that KFC is a brand you’ll love when you’re eight or eighty irrespective of what generation you belong to; eighty-year-olds were enjoying it forty years ago and eight-year-olds are being introduced to it today. Or it might be what you said. I rarely watch live TV. I couldn’t tell you the last ad I actually watched. I suppose the same is true today as it’s always been: the ads are often better than the programmes. I also couldn’t tell you the last time I went into a KFC but we’re probably talking fifteen years ago or longer. You know there was a time when everything I remembered was last week or a fortnight ago. When did the weeks become years? I’m not sure when the last time we had southern-fried chicken at home either. Probably years. My diet has changed radically since I met Carrie. I’m not saying I never ate rice or pasta before she arrived but it really was pretty much chips with everything and the ‘everything’ was usually coated in crumbs. Even the convenience food we eat nowadays is healthy. And I have no complaints. We do what we can to keep well and stay alive. When I fell ill about eight years ago and put on all that weight—the first time in my life I’d ever been overweight (not that 14st 5lbs made me obese or anything)—I started to take more of an interest in how many calories are in food not that calories are the be all and end all—there’s fat and salt and sugar and the rest—and I was gobsmacked. Since I got back down to a weight I’m comfortable being (13st or less) I do watch what I eat. There was a time I could pretty much stuff anything I wanted down my throat and I’d burn it off but that doesn’t happen these days and I’m starting to appreciate what our girlfriends were going through to stay svelte, not that anyone would mistake me for svelte.

I don't think I've seen it (Hubby tends to tape stuff, then fast forward through commercials) but I understand the confusion. And I envisioned the Colonel smacking his forehead in disgust that people will think just that: "eat this and watch your age double." :)

But I'm a southerner...we have to eat fried chicken occasionally, no matter what leading dieticians think. ;)