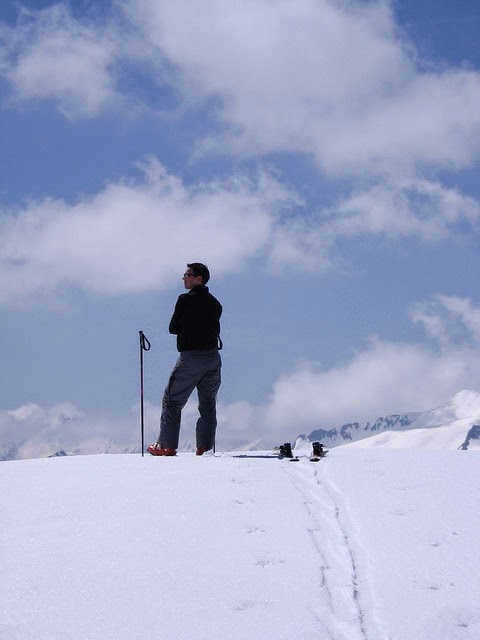 This day last week, there were some visitors in the house and the telly was on in the corner with nobody paying any attention to it. I glanced over at it, at one point, and saw that there was some downhill skiing on.

It was a remarkable image, looking down from the top of the ski run to the tiny village below. Usually the television pictures seem to level out and nullify the potency of a ski slope but this one seemed to capture it well, the sense of edginess and danger, the thundering steepness.

This image evoked a sleepy random thought in my head. Something along the lines of, “the next time I go skiing, I must remember to stand at the top of the run for an extra moment, to appreciate the view.”

It was the kind of thought that must run through a person’s mind a hundred times a day without ever getting interrogated or mulled over.

That’s what would normally have happened with this thought. I usually wouldn’t have even remembered thinking it, a few moments later. But this time, another part of my brain just happened to be paying attention too. It was the part of the brain that tries to catch me when I’m doing something stupid. Just as I had finished thinking my disposable skiing thought, just as I was about to turn my attention back to the visitors in the room, this part of my brain piped up.

“Hey, fuckwit, what do you think you're doing?”

“Nothing. I was just thinking about the next time I go skiing.”

“Really? Is that all? Well, let me give you a free wake up call here, sunshine. You haven’t been skiing in over twenty five years, you have a game knee, and you’re fifty one years old. Hear me on this, you are never going skiing again, pal. Not ever. Never.”

The combined awfulness and absolute truth of this left-brained interjection hit me quite forcibly. I looked again at the mountainous images on my screen.

It rather set the tone for the rest of the week. I kept doing little things and that same argumentative part of my brain kept wondering how many more times I would get to do them. Which time would be the last? An old song came on the car radio, one I only heard once every couple of years, and I was busy humming along when the brain voice interjected and asked me if I thought I might ever hear it again. If so, when? And would that next time be the last. Would this time be the last?

It was a momentary glitch, this uncharacteristic moribundity, and it’s largely gone again now, unless this writing brings it back. If it does, I shall have to give myself another stern talking-to like I did during the week.

It’s okay to be a little self-indulgent sometimes. “Gosh, I’m getting on a bit,” and “Golly, I'll never-ever do that again.” It’s fine. But then you’ve got to get over it, son. The world is full of ever-new eventualities, some of them great, some of them admittedly awful. Regardless whether they are good or ill, they will play themselves out as they must. Greet them as best you can and don’t waste your bloody time moaning over spilt milk. Or even (more to the point) milk that has been drunk and enjoyed to the full in the days when it was at its creamiest and its very best.

Maybe I’ve done my skiing but there’s a thousand other things I haven’t done and will do when I get the chance. Bring them on, I’m ready.

Ken, nice piece today. We're the same age and I've noticed the same 'this could be the last time' thoughts creeping in. My favourite was buying a shovel and realising I might never need to do that again, it could outlive me. These occasional & very specific atomic reminders of time passing are easy to deal with and useful prompts to enjoy what's happening now and what's to come. Much better than the big overwhelming 'oh my god, where's it all gone' type.

It is a sobering thought, Ken, yes, indeed. And here’s another one. Later on today, tomorrow, a week on Thursday, in two years, one month, three days and twenty-seven minutes you will do something for the last time in your life. You might have sugar in your coffee for the last time. Or write with a fountain pen. Or pee standing up. You won’t realise it’s the last time because you’ll assume—or presume (never quite sure which is which)—that you have years, decades even, left to you and then you’ll skip out the front door, slip on some black ice or trip over the dog, gracefully tumble backwards in slow motion (never quite understood how that slow motion thing works either), hit your head and then it’s game over, thanks for playing. THAT is a sobering thought. They say you should live every day as if it was your last and that’s still another thing I’m not sure to go about doing. If this were to be my last day on Earth would I be sitting here writing to you? Fond as I am of you I don’t think so. Or perhaps just a quick note: “Due to shuffle off this mortal coil in about ten hours. No time to chat. Thanks for everything. Keep your chin up.” I may never see the sea again. There’s no reason for me not to see the sea. I could get on a train—well, a bus and then a train—and be in Helensburgh in less than an hour. And the sea would be much the same as the last time I saw it. Or there must be some live cam pointing seaward somewhere. I could find one of them online. One sea’s much the same as another sea, a dirty great expanse of water. Once you’ve seen one you’ve pretty much seen them all. And I suppose you could say much the same for the view from the top of a ski slope. I wouldn’t know; I’ve never been skiing. One of an exceedingly-long list of things I’ve never done and never especially wanted to do but always believed I still had the option to do and then I got old (not quite sure when that happened) and began to realise that my available options were dwindling. Skiing is still an option but not an advisable one. And as the options diminish so the regrets start to amass. I wish I’d done this, had that, said that, gone there, felt something, not wasted my time watching so much bad television. I’m not entirely disappointed in my life although there’ve been more disappointments along the way than I would’ve included had I been given the chance to plan ahead. Which makes me wonder what the point to life is. Some might suggest that life is its own point. And I can see that. I prefer to think of life as a sum. Remember when we were kids and doing division for the first time? How many times does 5 go into 15? Three times. And 7 into 28? Four times. And 9 into 95? Ah, that’s not so easy. 10 remainder 5. I’d like to think when I die there’s something left over. A daughter, a couple of oils, five novels, two novellas, forty-odd stories (really should count them one day), three plays (yes, the bad one counts), one thousand on hundred and eighty eight poems and Christ knows how much I’ve written online. Something of me. A life should be more than the sum of its parts. I’ve always loved that concept. I mean, seriously, what’s the Mona Lisa worth? Twenty or thirty quid perhaps? Maybe as much as fifty? Today is the first day of the rest of our lives, Ken. And it may be our last too. What’re you going to do with yours? Me? I’m going to proofread this, post it and make a cup of coffee, real coffee—not that decaffeinated crap I usually drink—with sugar and milk and hope it’s not my last one ever but if it is I’ll damn well enjoy it.

Thanks Michael. Get that shovel out and shovel something, anything at all. Be careful not to dig with it because shovels are not very good for digging. For that you need a spade... possibly your last spade.

Jim: A quality response. I'm off to read it again, last day or not.