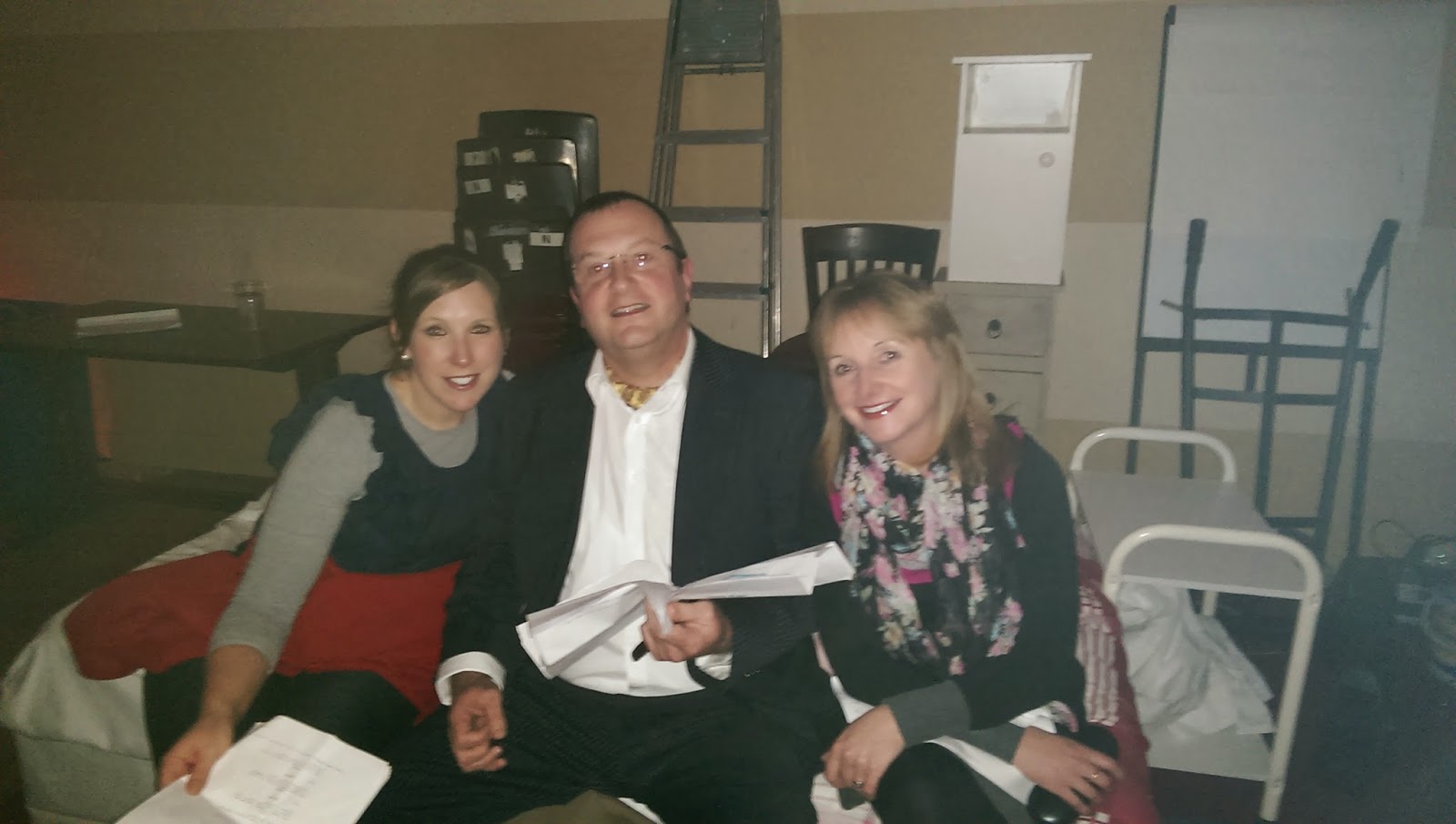 This week I got to show my newest little play to a theatre audience. I just want to scribble down a little bit about it, while it’s fresh in my head.

‘Dance Night’ is a fifteen minute theatre play which was written specifically for the Claremorris Fringe Theatre Festival and it was written with a particular cast in mind, all of who (thankfully) agreed to take part.

It was quite funny, actually. I finally made myself happy with the play one Sunday night back in November 2013. Of course there had been the customary draft-after-draft but now, finally, I had something in hand that I was reasonably content with. I printed off a few copies of the script and went around to Donna and Eamon’s houses and slipped them quietly through their letterboxes (Tara lives a bit too far away) then I ran away before I could be heard. Within half an hour I was getting simultaneous calls from both of them, waxing positive about the script, committing to do it, and berating me for not calling in for tea.

The premise of the play is that Diana is delivering her lecture to her assembled audience about the nature of amateur drama in theatre and how it is really just like a dance. She is interrupted by Edward, who saw her talk advertised in the local paper and, when he noted the title ‘Dance Night’, he mistakenly thought the evening was going to be an actual dance. Edward has come to dance and possibly, if he’s lucky, run into his wife again.

Perhaps I’m wrong but I think it’s far easier to make an audience laugh than it is to make them cry. An audience is predisposed to a little laughter and is often actively looking for a reason to do so. Not so with tears. Crying is a private thing and it does not come easily.

After we did the play in Claremorris on Tuesday night, quite a number of people came up to me and to the players and confessed that they had cried at the end of the play. For me it was a dream fifteen minutes. The cast played it beautifully. Let me name them, Donna Ruane, Tara Ní Cheallaigh, and Eamon Smith. They did me proud. I watched the performance from a nice vantage point on high and to the right of the hall so I got to see the lovely warm audience come along with us on our little journey.

This, for me, was the very best thing. To get the opportunity to put the writing onto the stage, to have it so brilliantly performed, and to entertain and even move the audience. There were prizes for best actor and actress and script and we got our fair share of nominations, which was gratifying. But I bet all the winners feel much the same way as I do about things. It's great to win, really great, but to get to do the plays and do them so well - that was the real prize.

Thanks to everybody at Claremorris Fringe who enabled the sixteen plays to come from far and wide to play on their stage. It was a genuine blast.

Thanks as well to our own lovely Linenhall Arts Centre who allowed us into their wonderful theatre to rehearse at every opportunity. What friends they are.

Now, if you’ll excuse me, I have to go and write something new. There’s an audience out there who may not know that they are waiting... but they are.

The script and the performance were beautiful, Ken, and it was a privilege to share in the experience. Warmest congratulations and thanks to all involved.
John Corless, Director of The Claremorris Fringe.

Please bring it to the Edinburgh festival! MC x

I’ve downloaded the play and I will get to it but at the moment I’m up to my armpits in an essay/review of Beckett’s Echo’s Bones which has just been published some eighty years after it was rejected by the publisher who commissioned it. It’s a piece of work, it really is—the annotations are longer than the story itself—but I will read your play when I’ve got this out of my head.

Yes, by the way, absolutely, it is far easier to make people laugh; any fool can do that. We don’t feel we’ve revealed too much of ourselves when we laugh at a joke but tears are a different kettle of fish; we don’t give them up so easily. I suppose some people cry easily but I personally treasure those few occasions where people have reported back to that something I’ve written reduced them to tears. Only once have I witnessed it.

I’ve never cried at a play—not seen enough—but a few films have moved me to tears. The first was One Flew Over the Cuckoo’s Nest which I snuck into when I was sixteen; this was the first X certificate film I’d ever seen. I think it was the scene with the big chief and the hydrotherapy console that finally did it for me but I remember being taken aback to find my emotions taking control like that. Been years since anything’s made me cry although I did get a little choked up at the end of Billy Liar the last time I watched it.

I’m pleased your wee play was a success. More later. I need to get on.

Thank you John. Coming from you, that means a lot and thank you too for an amazing week of theatre. Really excellent.

Jim: One Flew Over the Cuckoo's Nest is probably my favourite film. I couldn't get in when it first came around and had to put up with my Mum and Dad telling me how great it was. When I got in second time around, I was entranced by it... and still am.

Ken, the play was a beautifully written and acted piece. Congrats to the cast on their portrayals.

Continued success with everything in the future.

Michael: Thanks very much. It was great to see you there and many congratulations on the superb work you did all through the week. Amazing.

Ken, while I didn't cry on the night, there was definitely a tear in my eye as I retold the play to my wife the next day (it wasn't just too little sleep either!) So I reckon you did what you set out to do. I have a question about the last line, so we really must do lunch soon ...

We must Stephen, I am remiss as ever. Thanks for your support on the evening which was much appreciated. The play moves on to a new production over Manchester way later this year and that's every exciting too.