My Two Metre Rod and Me 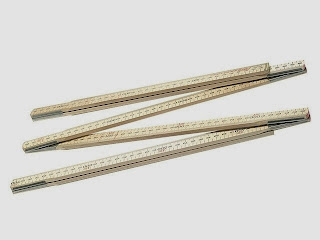 In my lifetime, I have measured a lot of stuff. It’s a key part of what I do. Mostly, it’s buildings but I’ve measured some other things too. I’m quite a good measurer of things even if I do say so myself.

But one of my most-favoured tools has fallen by the wayside such that I don’t even have one anymore. The two metre folding rod. That’s one there in the picture. These days it’s all retractable steel tapes and such but, no matter how impressively large your steel tape measure might be, it will never command the mystique and awe which the two metre rod could inspire, when used by a pro.

I don’t need to describe it, do it? The picture tells the story. It’s a rod, two metres long (really, Ken?) and it folds over onto itself in smaller manageable sections. The great advantage of the two metre rod was that it could maintain a measure of rigidity, even when fully extended and only held at one end. Your average steel tape will tend to buckle if extended beyond 1.5 metres.

So why don’t I still have one, if they’re that bloody brilliant? The truth is, I don’t know. My last one broke, I guess, many years ago, and I never got another one.

Gosh but it was a thing of beauty, back in the day. When you came in and started to unfold your two metre rod, people know they were in the presence of someone with a bit of skill and know how. There was a sort of 'Bruce Lee Nunchucks' action to the unleashing of the two metre rod upon a space to be measured. One twirled and angled and extended the thing in a manner slightly reminiscent of Darth Maul and his two sided light sabre in that first-and fourth Star Wars movie.

You know what the effect was most akin to? Remember in ‘Raiders of the Lost Ark’, when the bad guy came into the Himalayan Pub and he took out the nasty looking thing made up of rods and chains and then he manipulated it into nothing more threatening than a coat hanger? Yes, it’s a bit like that. The clients, seeing this folded behemoth revealed and slowly unleashed, may have felt apprehension and even fear at what may have been about to unfold (pun intended). Then, when they saw that the awesome tool was used only for good, they would relax into a state of quite respectful admiration.

You just don't get that with a tape.

There was a downside, though, as there so often is. In unskilled awkward hands, the two metre rod could be a weapon of some destruction. Eyes could be poked, fingers could be trapped and (herein lies the tale) fixtures and furnishings could be placed in grave risk.

So, yes, once, quite early in my measuring career, I was taken to an extremely up-market antiques shop in the Bond Street environs of London Town. The mission was to survey the internal spaces of the shop with a view to planning some renovation works. My boss, who accompanied me, was not above a bit of surveying himself, when the need arose, but this particular client was nervous and needy and required constant attention from the ‘main man’ while the measuring works progressed.

So it was that I found myself in a room all by myself, tasked with recording the dimensions of the space. I had done many such rooms in the past but this one was different, unique even, in that it was literally filled to the brim with highly valuable antiques. There were paintings and couches and chairs and vases and plates and God knows what else and every little thing reeked to the high heavens of opulence and high-value.

I was a good little measurer, even way back then. But I was also known to be a bit clumsy. Being in this room, by myself, was by no means an ideal situation and I knew it.

Still,  the job had to be done and so, while Peter engaged the proprietor in Bond Street Environs-Style banter out in the front of the shop, I set to my task.

Allow me one more movie analogy. Remember the film ‘Entrapment’ with Sean Connery and Catherine Zeta Jones. Remember how Catherine was improving her cat-burglar skills by angling and contorting herself… ... ... (sorry, 'tuned out there for a moment) to avoid the security laser beams. Well that was me in the little antiques room. I was Catherine Zeta Jones.

Nothing smashed, nothing broken, nothing got even slightly scratched. I emerged from the room with the measurements captured on my pad and my two metre rod, still extended, propped manfully over my shoulder.

My boss leaned in and brushed the end of the rod, quite discreetly. “Let’s go then.”

We took our leave. In the car, on the way back to base, my boss presented my with a small slip of cardboard with a string attached to it.

“Keep that as a memento of your visit,” he said, “I pulled it off the end of your rod.”

It was a price tag.

This story is true.

I’ve never owned a ruler longer than 12". I have three at the moment all the same with a steel rod in them. The first I bought was a Jakar 3063 cutting ruler which I bought in a craft shop in Ayr easily thirty years ago. All the numbers have practically worn off it now but I still use it regularly but not to measure. I write with it. When I used to work in the civil service my writing got so bad that I decided to do something about it. I began using a ruler to keep my writing straight and developed a style that I use to this day. You’ve seen the note in that last book I sent you. Well, that’s how I do it. When I started by last job I bought a ruler to use there. This time it was a Checkmate MS-30 which I loaned to my boss and she lost it. I replaced it out of petty cash with another Jakar 3063 and then about a year later the Checkmate turned up under a pile of papers. So now I have three rulers.

I think my dad had a rod like yours. It would’ve been two yards long but I’m pretty sure he had one. I was more interested in his tape measure which was cloth and wrapped inside a big brown leathery case. He bought a retractable one years later but I always had a soft spot for the big reel. This is the closest photo I can find online. I loved the wee handle for winding the tape back in.

I’m surprised you don’t have a laser tape measure. I don’t. My wife would love one. She’s got the tool gene. Her brother bought her a Dremel 4000 which arrived while she was still in the States. I didn’t even know what a Dremel was and I actually haven’t even looked in the case. I couldn’t even tell you what tools we do own apart from a hammer, some screwdrivers and a drill. They’re probably the only ones I’ve ever used.

I've got one of those laser doo-hickies somewhere but never fell in love with it. I could prattle on about reduced levels of accuracy but the truth is probably that I am a bit of a troglodyte.

This is a great story. It is beautifully written, utterly engaging and thankfully, has a happy ending, but it could have been oh so different.

Great stuff Ken (Stuff! You see now why some of us are writers and others are readers?)