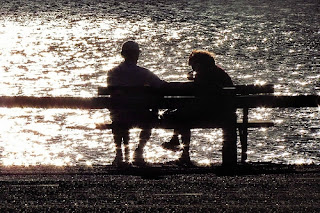 When I turned fifty, a few weeks ago, I got lots of good wishes, both in real life and on that social media thing. That was all really nice.

I didn’t say very much about it though. The whole ‘Turning Fifty’ thing. The reasons for this were none-too-deep or impenetrable. I really had nothing to say, that’s all.

Fifty turned out to be just another day, another leaf peeled off the calendar, that’s all.

I sat up late and got up early on the day I turned fifty, perhaps in the hope that some new insight would come out and show itself. But the dawn didn’t bring any great new philosophy or wisdom for me to share with you. I quietly slipped into my sixth decade on the planet and on we go. Slow days and lightning-fast years. Just the same as it has always been.

Perhaps now, though, a few weeks in, I can offer a line or two on what it feels like to be fifty, for me at least. Don’t get all excited or anything like that, it’s not going to be much.

My little insight (if that is indeed what it turns out to be) came about because I took a week off with my family. Just the four of us. It was lovely. No, you don’t need to know where, it’s not relevant. We packed up and went away and we lived in each other’s ears for the whole week. Like I said, it was nice, it was lovely.

Here’s what I concluded.

Being fifty is like arriving at Wednesday on your week off.

When Wednesday comes, in the span of your week off, it is like a hill has been crested and the time remaining now lies spread out before you much more clearly than the wonderful mysterious first part ever did. You can see the route before you and it is a downhill route which means that the journey will unfold more quickly now and, most likely, there will be more stumbles.

There is now a niggling feeling. Although there is plenty of time left in your holiday, and although you have learned in those first awkward days how to appreciate the days of your week, still the niggle remains that those long carefree days before the end came into view are now finally over and, no matter how much fun and how much joy is still to be had, that end will always be there, visible, on the horizon. It is no longer obscure.

Maybe it’s just me. The second part of anything has never been the best part for me. Some tiny tic in my brain always seems to know when the centre point of something has been passed and when the latter half begins. So it has always been. Time gets counted, split into two factions. The ‘up’ and the ‘back-down’. I know, I know, that this life-week of mine probably reached its actual zenith way back when I hit forty or even thirty-five. This fifty-thing is actually to-hell-and-gone past my half-way-point. I know. But still my life now feels like the hump-of-the-week to me. Not necessarily in a negative way but, honestly, not entirely in a positive way either.

That’s all I got on the subject.

Oh. That’s almost all I got.

One other observation for now. Memories seem to become easier to identify when you get beyond fifty. When you were young, you had no idea what things would embed themselves as deep, valued, memories. Some random word, some fleeting tune, the smell of the inside of a bus on a summer’s day… who the hell knew what would stick?

People, your most treasured people, huddled close together in early-evening sparkling water which is so bright that they are reduced to nothing more than laughing silhouettes in the dazzling golden gleam. "This will be a memory," you say, "I will remember this."

You spot these memories, when you are over fifty, and you store them away and then you hope a little that you may be around to sup on them, to let them sustain you, even when many other things have gone.

Carolinesweetie:
What a beautiful piece of thoughtful writing Ken. Eloquent and touching. I don't think you've reached the crest, but the plateau which is wide (my autocorrect changed this to wise which also would have been appropriate) and long.
Thanks for this Ken, it made me smile and ponder.

Two things shaped my idea about getting older...yes, memories. :)

One was being told as a child by an adult I admired, "Age is mind over matter. If you don't mind, it doesn't matter." And frankly, getting older doesn't bother me..probably because of Memory #2.

On Mom's 50th birthday, I found her crying...I was 28. When I asked why, she dramatically sobbed, "My life is half over!" Since I'd grown up in such a "normal" family, this seemed not only odd but alarming. After all, I had a bet with my Grandma that we'd both make it to 100.

From that day on, I swore I would stick to "Age is mind over matter". Birthdays to me are another victory over a year of challenges. I'm too curious to contemplate the journey's end. Then again, I work with senior citizens who think I'm a mere child...and I've got 5 years on you. :)

So I will continue to journey down the path with you and I swear, if you reach the crabby old man stage, I will make you giggle right back out of it.

Glad you did make some new memories with your vacation though. You can never have enough of those...and no one can take them away.

As both my parents died in their mid-seventies when I hit fifty I realised that I was probably two thirds done. I’ve never known anyone live to a hundred and although the odds are I will live longer than both my parents—better health care, less stressful life etc.—I’ll regard anything after seventy-five as a bonus. Memories I can’t seem to hang onto. I forget everything. I gave up on a memoir-based novel because I found I couldn’t remember anything in any detail, just the gist. And so I enjoy the moment and don’t worry too much about trying to hang onto it. I’m not sure that wallowing in nostalgia as an old man is something I want to do. Yes, the past will always be a happier place than the present but since we can’t get there and even if we could we wouldn’t be the person we’d want to be to enjoy that past it’s best to relish the moment while you have it. I believe strongly in the law of diminishing returns: the second bite is never as good as the first nor is the third as good as the second. They might not diminish by much—the last bite of a Mars Bar is actually pretty good—but it will have lost something. Worry does no good. All it does is take something away from the present and as the present is all we ever have that we can rely on why do anything to make it more miserable or less pleasurable than it is? That’s my tuppenceworth anyway.

You write every week, but not once does it get tired, or samey. You always have something new to add, a unique perspective, something that makes me think, and makes me want to print the piece off (ridiculous I know, but I like reading it so much that I want to sort of immortalise it somehow. I have a 'Ken' file. ;-)). This was a brilliant piece, thanks Ken. And Happy Belated Birthday. I'm cross with myself for not saying it on the day. I haven't checked twitter for a while. I don't suppose you're on facebook are you? I've defected because I can manage it better. Have a great Wednesday Ken. :-) xxx