Hard to Keep Up 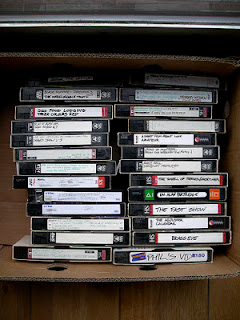 I find it increasingly hard to keep up with stuff.

I’m not talking about anything important here. I’m mostly just thinking about the ‘entertainment’ stuff. Books and movies and television, that sort of thing. Suddenly, there seems to be so much of it all, it’s very hard to keep up.

It seemed easier years ago. There’s at least two good reasons for that, I reckon. Firstly there really wasn’t so much stuff around. In the Seventies, we had just four or five channels of telly and they all closed down at midnight (we were lucky, we picked up BBC and UTV from our north-westerly location, others had only one channel to choose from). There seemed to be less books too, less movies. Less everything.

Secondly there was so much more time or at least there seemed to be. Whatever you didn’t get to see/read/hear/eat/smell could be caught up with a little way on down the line. No worries. Plenty of time.

There isn’t plenty of time now, not for me anyway. ‘Fifty, this year, tick-tock, tick-tock. There’s no practical deferring of stuff too far into the future. If you don’t see/hear/smell it now, it’s most likely you never will see/hear/smell it at all.

My Sky Plus box is the physical manifestation of this situation. It is the concept of deferred consumption and unfulfilled desire made flesh. I think I’ll use my Sky Plus box to illustrate my point. It’s the exact same situation with books and music and… God knows what else but the Sky Plus Box sits there and tells it clearly. When I sit down and push my Sky Plus box button and I inspect the long list of TV treats I have stored and deferred for later consumption, it is almost like a taunt, a confirmation of how little time there really is and how I really should be using it better.

It’s not easy though. Our TV has demands on it far beyond my own. The kids have things they need to see, as does Patricia. I often only get to my own things late in the evening when the house is ticking peacefully into the night. Then what happens? Of course. I fall asleep in front of some desperate catch-up exercise. Wake up, scratch, stumble off to bed. Another programme deferred back to the list.

As a writer, I should be seeing more of these telly programmes. I should be understanding the latest trends and movements in the world of popular entertainment. I really should be keeping up.

I’ve read this piece back now and I’m shaking my head.

The point I seem to have made, somewhere in the middle of all this, is that I should be using my time better by watching more television. What a lot of twaddle that is. I do things, I’m busy, life is full. The last thing I need is more telly.

I should be looking at the Sky Plus box another way. Perhaps it isn’t a taunt after all. Perhaps it isn’t a record of my failure. Perhaps it’s more a record of success. A measure of all the good times spent away from the dormant glare of the tellybox. Sure I might have missed a few good shows along the way but I’m living, aren’t I? Isn’t that a better thing, all in all?

Besides, failing some technological bump, my Sky Plus box will continue to curate all my missed telly for me and, maybe someday, some fine day, I will take a week off from life and watch it all. Maybe then I will feast on my ‘Borgen’ (Series One), my ‘Game of Thrones’ (Series One), my ‘Killing 3’, my ‘Punch Drunk Love’, my ‘A Prophet’… the list isn’t endless but it is long.

Will I hell! I’ll pick them off, here and there, when I can and continue the dance that is Real Life.

We watch very little live TV these days, Ken. I think the only thing apart from the news in the morning is Doctor Who. That’s the only programme we stop what we’re doing to watch as it airs. In that respect technology is wonderful. I programme the TiVo on a Friday or Saturday for the week ahead and never have to worry about what’s showing when; it’ll all get caught up with eventually. Only it’s not getting caught up with is it? I know some writers are very anti-TV/cinema but I’m not one of them. I think writers can learn a helluva lot about how to structure a story from TV and film especially bad TV. One of the shows we watch is Castle and I cite it often as an example of groanworthy plotting but we like the characters and enjoy finding holes in the writing so where’s the harm in it? TV also saves time. My entire knowledge of Dickens, Austin and Christie comes from TV. I have never read a book by any of these authors and yet consider myself quite knowledgeable. Okay I know I’m missing stuff but that’s fine. It’s not as if I’m not reading. I’m just reading other stuff. I’m maximising my time. There simply isn’t enough time to read every book I’d like to read. I’m reading a lovely wee book at the moment called Being There by Jerzy Kosinski and, like me, I’m sure you’ve seen the wonderful adaptation featuring Peter Sellers. Sellers's performance was universally lauded by critics and rightly so but I’m not finding very much extra in the book. I’m enjoying it—don’t get me wrong, it’s a lovely story—but the film is a far more efficient (and memorable) way of absorbing the material.

I do, however, feel burdened by the sheer amount of stuff there is out there that demands my attention. When sending out e-mails begging for book reviews most bloggers tell me they have to-read piles that’ll take them months to get through. In that respect I’m quite lucky. I get very few unsolicited requests. Even people I’ve reviewed before “forget” to contact me when they have something new out. Now that does puzzle me because I’m not sure anyone else would put as much time and effort into reviewing their books but there you go. I did the maths recently and assuming I live to about the same age as both my parents (round about seventy-five) and assuming that I read a book a week for the rest of my life that means I’ve enough time to read about 1100 more books and when you start to think it terms like that then mortality suddenly comes sharply into focus. When I was in my late teens I went through a phase of only reading novels by Nobel Prize winners and a part of me kinda wants to return to that mentality. If my head is clear enough to read something decent then why aren’t I reading something decent? TV’s a little different. I watch TV when my mind’s not fit for anything else and even then I don’t just watch anything; I haven’t watched an episode of any soap opera in many years although I would’ve liked to have seen that episode of Eastenders where the entire episode featured June Brown doing a monologue.

In this respect I do bemoan the fact that more good books aren’t being dramatized. There’s so much being written at the moment and yet the BBC insist on adapting the same old stuff. They’re getting a wee bit better but I think there’s still room for improvement. And I’ll never understand why there’s not an audience for a weekly Play for Today or Armchair Theatre type of play. I watched an old TV adaptation of No Exit a couple a days ago for research and it was wonderful—Harold Pinter played the man—and I cannot believe there’s not an audience out there for stuff like this. Outside broadcasts are relatively cheap TV—seriously how much does an episode of Bargain Hunt cost?—and so why aren’t they going along to the Old Vic, setting up a couple of cameras and recording for posterity some of the great performances that are simply vanishing into the ether? I think it’s nothing less than criminal.

I can totally relate to this: I have unwatched films and unread books in an ever-growing pile, presumably awaiting my retirement, while I spend all my free time in conversations, reading news or on the web gleaning the opinions of others on films and books which I haven't found the time to enjoy myself. As a consumer unit, I am a failure.

I reckon you've got the life-balance thing nailed, Ken.