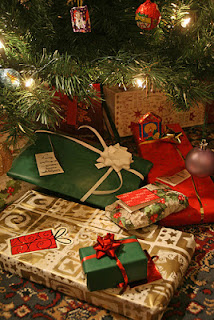 Coupling this with the fact that my Sunday blog post is falling very close to Christmas Eve this year, I thought I would just sit here for a few moments and think about the Christmas Eves of my childhood and, without the requirement to corral them into a coherent entertainment, just write them down.

In sitting and thinking, I find that the various elements of my Christmas Eve recollections meld together such that I can’t say what happened in any one particular year. To get over this hurdle, I decided I would write about one particular childhood day but this day is actually an amalgam of various Christmas Eves.

No point to it, none that I can easily explain anyway. We write what occurs to us and we hope it makes some kind of sense sometime, somewhere.

When I think of my childhood Christmas Eves today, the overriding impression I recall is one of utter bafflement. “How can they act so normal?” I was always thinking, “how can they do that?”

It was true, all the adults were simply going about their business. The Vegetable Man was calling with earth-ridden carrots and rampant cabbages, the house was being hoovered, neighbours were stopping and chatting on the street about silly irrelevant things. “How Can They Do That?” Santy is coming, this very night. How could they be so incredibly cool about it all?

Kevin Bray called around for tea. Kevin was a great friend of the family. He brought me a present. This was unheard-of, a present before Christmas Day. I was allowed to open it. It was Lego. I was overjoyed, literally, I had a present and it wasn’t even ‘Santy-Time’ yet.

But, even with some new Lego to divert me, the clock still ticked terribly slow. There was no snow, ever. There was drizzle such that you couldn’t really go outside without getting drenched. There were parcels growing mysteriously under the tree as people got their wrapping done and dropped things there. The butcher had to be visited, Clive and Vinnie in striped aprons seriously debating the cuts of meat with the current customer while recklessly bantering with the customer waiting behind.

A bad cartoon on the telly in the drizzly afternoon, Rudolph and Santy in cotton-wool laden stop-motion. “It’s not a real cartoon, it’s one of those from ‘Out-Foreign’.” A Laurel and Hardy film, Stan and Ollie sitting on a bench in front of a huge hedge. I could hit Google and find out what movie it was in about thirty seconds flat but I don’t want to. The flickering image of my distant memory is far far better than the truth.

Confession in the afternoon. Although you might not go too much throughout the year, you had to be all-sorted-out for Jesus’ arrival in the morning. A cartoon abandoned, a real one this time, to trudge up the back-alley to the church to sit and wait for your turn to confess to the priest. Sitting in line on the arse-shined, bench with the other (older) people. Shuffling your own bum along as the end person goes into the box to tell all. Then it's your turn.

“Bless me fadder for I have sinned, I was bold and I was cheeky to me Mam and I told lies and I was late for mass…”

“I hope so too. Three ‘Hails Marys’ and an ‘Our Father’. In nomine Patris et Filii et Spiritus Sancti…”

Dusk. A candle lit in the upstairs window, the front bedroom curtains left drawn so that the guttering light can shine out onto the street and onto the black river beyond. “A welcome home for the travellers,” Mum used to say.

“Ice Station Zebra” on the telly in the tea-time dark. A big movie. I didn’t care. Please let it be over, please let bedtime come. Kevin Bray had brought a toy for my older brothers too. An intercom set – two futuristic handsets with a thin thread of extended red string between them. When the string was pulled tight the voice would carry down it. That was the theory anyway. We stretched it up the stairs and over the gap between the back bedroom ceiling and the wall. I was up there, on top of the bedroom wardrobe, trying to hear my brother whispering from down in the hall. It never worked but it passed some time.

Nearly bedtime and another movie on the telly. This time it’s “High Society”. Nothing else has ever seemed so utterly irrelevant to my life. Santy is Coming and everybody is watching this… this stupid rubbishy thing about some eejit who apparently is called Deckscrub.

A neighbour comes in. Do I have to wait until they stop chatting and leave before I can go to bed? Oh, please, please leave and please please, Deckscrub, stop singing so that the News can come on and I can finally hit the hay.

The News, at last. Santy is on there. He seems to be climbing on a train in Connolly Station with a huge sack of presents. How the hell can that work? Don’t think too much. It’s time for bed, it won’t be easy to sleep but it’s best to make a start. PJ’ed up, hugs all round, pipe tobacco smoke aroma from Dad, savoury stuffing scent from Mum. The turkey is in, most of the cooking done tonight for reheating after Mass tomorrow.

Everybody is so very cool, so very normal. I still don’t understand.

How can they do that?

Don’t they know that Santy is Coming?

Considering the fact we’re about the same age there’s a lot here I can relate to. Christmas is not what it once was. I doubt it ever was what we imagined it to be and that was the thing, it was all to do with our imaginations; have they stopped working now we’re past the bloom of youth? I thought we writers got a pass. We have Christmas a day early now as I imagine many do since with so many divorced couples across the country there’s simply not enough time to fit in three or four Christmas meals in one twenty-four hour period. This means that the actual Christmas Day is a bit of a damp squib here. All the presents have been exchanged—and by all I mean the one that my daughter’s reduced me to which pains me but I’d dragged the magic on for about as long as one reasonably could and then some (I was still giving her an advent calendar full of tiny gifts well into her twenties)—and so it’s just another day like any other day only we have Doctor Who to look forward to which just makes it feel like a Saturday rather than Christmas Day. Ho hum.

It’s my wedding anniversary today—fifteen years I think (I’m terrible aren’t I?)—and for the first time ever I forgot to put out Carrie’s pressie the night before; I got my days mixed up. I was up for three hours last night working so it wasn’t as if I didn’t have time. Anyway I had to rush back into my office and get my card and gift. Apparently she’d been dropping hints for weeks. I heard nothing. You don’t hint at me. My mind is always elsewhere. You tell me when you want me to remember or do something.

Happy Anniversary, Jim and Carrie, you'll keep Christmas together and that will be good. x