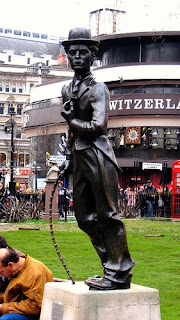 I think I’m getting more serious as I get older. It’s probably a natural thing. Life gets more serious, doesn't it? Still, I was relieved recently to find that I still haven’t completely lost my interest in having a little off-the-cuff fun when the opportunity randomly presents itself.

Believe it or not, I’m actually quite a shy person in my own peculiar way. If required, I can be outgoing and effusive enough but my default setting is one of, ‘leave me alone and I will happily slip past you and be on my way’.

One exception to this is my 'Opportunistic Fun Urge'.  Only very rarely does it happen that a situation presents itself, a confluence of planets or something, which provides an opportunity for a moment of levity… if you are brave enough to take it.

Let me give you one of my favourite ‘for instances’.

When I lived in London, as I did for fourteen years, I loved to catch the new movies in Leicester Square. If I was meeting someone there, I would tend to wait at the statue of Charlie Chaplin outside the Odeon. I think it may have moved a bit since then. One summer’s evening, I was standing there waiting for someone when I noticed that a yellow post-it note was stuck to Charlie’s body. It flapped in the breeze and then blew off. I chased it across the square, more out of curiosity than anything else, and eventually caught up with it and snatched it from the air. My aim was simple, retrieve it and put it back on the statue, perhaps a little more securely than before, so that the intended recipient might eventually find it.

As I walked back, I read it.

It read, “Hi Marie and Sasha, sorry couldn’t wait any longer, see you back at the hotel. Jean.”

Here’s where the fun opportunity arose.  When I got back to the statue, note in hand, there were two girls standing there, looking around anxiously. They had backpacks and it wasn’t hard to tell that they were American.

I think this sets me apart a bit from quite a lot of other people. This attribute where, despite my inherent shyness and reticence, I cannot resist the pull of a little opportunistic fun.

I approached the girls in my brightest, friendliest manner.

Sasha and Marie were as surprised and baffled as you might expect.

“It’s been so long. Too long. Are you going to see a movie? Are you meeting someone? (Stand back and admire) Can you believe us meeting like this?”  Then the pause, the hint of disappointment. “You don’t remember me, do you?”

That’s about as far as I could take it.  I apologised, explained about the blown away note and how Jean was probably back at the hotel by now. We had a laugh and that was it. Nothing, really, in the scheme of things. Just a moment of impromptu fun which I enjoyed and which I remember fondly.

These things happen so rarely.

Then, just last week, I was given another one. A potential moment of unrehearsed fun. Out of the blue. I’m much older and sadder now then I was in Leicester Square but I still couldn’t resist. I’m glad about that.

It was the simplest of things.

I was rushing to a meeting, armed with papers and such, my head full of what I would have to say. My route took me along the river in Castlebar which has recently been treated to a new protective guarding made of stainless steel and thick horizontal wire.

As I plodded along, I saw a Dad and his little three year old son up ahead. Both were studying the fence in a very serious manner.  As I approached, as I often do with people, I tuned into their conversation.

“I was only kidding, Jack, the wire is not electrified. Touch it and see.”

Jack was reluctant, he kept extending his small fingers a little toward the wire and then drawing them back.

I was practically upon them by now so there was no time for rational thought or maturity. Here was a opportunity for a possible smile, a moment different to all the rest.  Stopping beside them, I wordlessly examined the wire then, still wordlessly, I grabbed it.

I twitched, a little at first, then juddered quite alarmingly, then lost my footing and fell to the ground still grabbing the wire.  Then I let go, stood up, dusted myself down and went on my way.  Not a word to father and son, just 'bang' and off.

Father took a moment, then he laughed. He laughed heartily. It was good to hear. I like a laugh and what I had done could have just as easily earned me a bang on the ear. I know that, believe me.

As I strolled off, I looked back, Dad was still laughing. The kid was looking dubious, as you might expect. I am sure he got around to grasping the wire himself afterward, though perhaps not for a moment or two.

What is the attraction for me in these silly, rare, slightly dangerous moments? I can’t say. My instinct is that it is  one of those little parts of me which makes me a bit different to most other people and, for that reason mostly, I like it.

Roll on the next opportunity.

I hope I survive it.

I would not have done that. I probably would have chased after the Post-it note but refrained from any kind of pretence. I would have likely handed one of them the note along with a lengthy explanation regarding what I was doing chasing Post-it notes across the town. My last wife would have done it. We were once walking past a bus stop where a couple were winching—a wonderful Scottish word that can mean either snogging or courting depending on context—and she went over and stood behind the girl until they noticed her at which point she said to them, “I’m forming a queue.” She could get away with that. I couldn't.

I do have a fun side but the chances for it to be seen arise less and less these days. I’m content to feel content and never really want to push the boat out any further than that. Most of my opportunities these days for a bit of fun involve verbal parrying. Carrie will say something and I’ll deliberately mishear her. I frequently mishear her as it is—she’ll say, “You need to clean your ears out,” to which I reply, “You need to mumble louder”—and it’s all clean fun but it’s especially funny when I can twist what’s she’s said into something particularly nonsensical. (Needless to say I can’t think of an example but one will come to me as soon as I’ve posted this.) She’s also got used to the Scottish fondness for slagging people off and realises that there’s no harm in it, quite the opposite.

I’ve never been one for pranks though. Slapstick in particular usually fails to amuse me unless performed by masters like Laurel and Hardy. I don’t get The Three Stooges at all. I’m glad I don’t live in America put it that way. Mine would be the house kids were genuinely afeared to approach come Halloween. I’m not saying that fun has to be a private thing but I need to be sure of my audience. My wife and daughter get my humour. I’m not sure if her husband does. I’m a bit too deadpan for him at times.

I used to work with this bloke called Brian. He was an engineer but dressed more like a farmer and looked a bit like James Cromwell too now I think about it. He never cracked a smile and you never, never knew when he was joking unless you watched his eyes very carefully. He could control everything else but not the eyes. Most people thought he was odd. I thought he was wonderful. He’d say things like, if I can borrow a line from Beckett, “Personally I have no bone to pick with graveyards.” and you’d look at him to see if he was being serious or what. He would have made a great Krapp.

I love the fact you still embrace your "inner child"...and let him out to play. ;)

And I love even more the fact that your moments of play are truly just that...FUN. No harm, no foul, no one hurt. (Well that kid probably had nightmares for a week). Without it going to your head, you have a kind face and an infectious smile...how could anyone be mad at you?

I understand because that shy kid in me wins 95% of the time and I'm not as daring as you. But if we can get someone to smile....

I just hope you never run into the kind of recipient who says, "Oh sure I remember you. You owe me money, right?" ;)