The Score of my Life 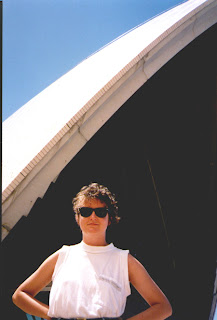 I like to give the impression that my blog is a bit of an open book, that everything and anything is always up for discussion.  That’s not really the case though, is it?

Astute observers of this page over the years will note that there are certain subjects I don’t talk about very much at all.  This is no accident.  Things related to my work and my family may arise incidentally from time-to-time but it is not my wish to regularly offer these aspects of my life into the public domain.

This week I felt I should make a small exception.

This week my wife, Patricia, and I slipped away for an nice dinner and a quiet clink of glasses.  This week we were twenty years married.

Trish is one of the subjects I have deliberately chosen not to write about here.  Mostly because she is, first and foremost, her own person and for me to trap her in the glass bottle of 'my own perceptions of her' would be to do her a serious injustice.

But, just this once, for the week that’s in it…

I met Trish in The George Inn on Borough High Street one Saturday night in March 1987.  There was a party in a nurse’s residence adjacent to Guy’s Hospital and my flat mates were going.  I wasn’t going, no way, I had free tickets to see a preview of ‘Little Shop of Horrors’ in The Warner West End for the next morning and I was going to have an early night.  In addition, I was grumpy and out of sorts.  The guys needed a lift home, though, and, mostly for that reason, they persuaded me to go.

I guess I owe them one for that.

Trish was there in the pub.  It was one of those ‘across a crowded room’ things… not an instant head-over heels reaction, more of a ‘She looks nice, who is she?’ type of thing.  We spent the night talking. She had just arrived in London, I offered to show her around one evening, she accepted.  I gave her a lift home and 'One Trick Pony' was in the car cassette player.  She knew all the words. It’s funny how things happen, how they can fall easily into place.

We drove around London-by-night.  We peeped into the Auditorium of The Royal Festival Hall and I asked her out again.  Our first real-date was to The Royal Opera House to see Swan Lake. Unusual, that one, but I was going for an illusion of Classiness.  Our first movie date was ‘Stand By Me’.

In 1989, my car got stolen.  For me on my own, that would have been a disaster to mope-around-about for months on end.  Thanks to Trish, it became a ‘Seize the Day’ moment.  Instead of buying another car, the insurance money we eventually got was put towards a year-long world trip.  I quit my job and off we went together.  Such a thing would simply never have happened without Trish.  I would never have been brave enough to pack in a job without having another one lined up, I would never have thought I could exist without a car…  That 364 days out in the wide world remains one of the highlights of my life.  The memory of that adventure keeps me satisfied now, no matter how fixed and anchored my life may sometimes seem.

We got married in 1991 in The Claddagh in Galway.  We returned to London afterward and lived there until 1997 when we returned to Ireland with our new son… then another son came along…

One of the recurring themes of my early times with Trish was a wish to ‘have some history with her’.  She was (and is) very bright and lovely and I always kind of feared that my rather thin enamel would wear off, (as it has for many people over the years) and that she would see the real, grey, me beneath and then she would go.

When we were getting married and the priest came and asked what reading we would like at the ceremony, I immediately suggested a slightly obscure one from The Book of Tobit.  The priest raised an eyebrow. “Here”, he must have thought, “is a man who knows his scripture.”  Not so, of course.  As usual, I was bluffing. I had just finished reading ‘A Prayer for Owen Meany’ and that reading and the sentiment, used so aptly therein, had remained with me.  It still does to this day.

“Please be merciful to us and grant that we may grow old together.”  Tobit 8.7

For that was always the wish, to make some history together and to be allowed the time to do it.

So, the report is, so far so good.  We have made some serious history together and with the grace of whatever dispenses it, we will be permitted to travel onward a ways yet.

So here’s to us, twenty years into our married life together and still truckin’ along.  And here’s to you, Babes, the love of my life…

… let’s do another twenty and see how we get on, yeah?

She sounds just perfect. You're a lucky man!
x

This post makes me feel very happy. Congrats on your first twenty years. I suspect Trish is a lucky lady, too.

All the best to you both. Finding someone who makes you happy (and who you can make happy, too) definitely transforms both of your lives. It's been just over six and a half years for me :)

There are times in life that you just need to share with the world when you make a wonderful decision.

As someone who made the same kind of decision 31 years ago, I salute you! A good spouse is hard to find and jewel to keep. :)

I think most of us like to respect our families’ privacy – it’s our blog, not theirs – and so, like you, I only mention my family in passing and, Carrie aside, never by name. A wee while ago I did a similar post where I gave Carrie her place and I think it’s only right and proper that we do acknowledge the support we get from these women whether overt or covert. I’ve been married about twenty-five years myself just not to the same person and Carrie must be around about forty-five. You’ll forgive me being vague with the dates but you know how I am. Those are ballpark figures. I think that was why we became ‘an old married couple’ practically from the start and, frankly, there are times I do feel that we’ve been married all our lives.

I am a man who knows his scripture as you know, try as hard as I might to forget them, but the quote from Tobit was a new one on me. I’ve never known Catholics in general to quote much from the Bible and, of course, the Book of Tobit was not in the version I grew up with. Needless to say Carrie and I did not have any kind of religious ceremony.

Marvelous. My parents had been together over 50 years at the time they died. A few years before then, my sister and brother-in-law and I threw them a 50th anniversary party to die for. It included items from the cuisines that had been or were still important to every member of our family: Ireland, Norway, USA, Holland, Indonesia, India. We've all lived overseas and traveled widely.

People who travel like you did for your year on the road are a small number. Most people stay home. That year you guys gave yourselves was a real gift. Seeing the world makes most people realize that their own backgrounds are part of a larger tapestry, and a beautiful one.

Ben: Well said. I like 'Six and a Half' keep counting and treasuring every month mate.

Jim: As ever, I learn something new from you. Until your comment, I thought Tobit was a book in everybody's Bible, I see now that is not the case. In fairness, I'd never heard of the bloody book until I read it in John Irvine's wonderful (and still favorite) novel.

Art: Thank you. Travel seems to become ever more important in memory. At the time, it can be troublesome and a bit sweaty but, looking back, it is adventure and happiness and heightened experience all the way.

Ach, lovely, you old romantic, you. Scary how fast history is made though, with lots left to make, my friend :) x

Congratulations on your first 20 years, here's to the next and the 20 after that.
When my beloved first wrote about me on his blog I hated it - I saw a side of me and him that was different to the me and him I thought I knew. When I first wrote about him on my blog, I was anxious and not a little embarrassed. Nowadays I write about him, probably too much - but it's always more about me and how I am around him, than it ever is about trying to relay to anyone else what he's really like. I wouldn't dare to even try that!

Sharon: It's a fraught game, blogging about other halves (whispers) I seem to have gotten away with it. :)

snorestore: You Win! You spotted the deliberate (as if!) error and the Chocolate Factory is yours. 1991, yes. :)

Wonderful. Not only are you a lucky man, from the sounds of it, but I'd venture to say that she's a lucky woman.

Congratulations, and cheers to 20 more years!

That was really nice to read. I don't think it's about you having a thin veneer. It's more like you're a lovely mug of coffee with a dash of Irish whiskey. You're more like an acquired taste, not everyone acquires the taste.

I forgot to say "Congratulations"! To both of you.