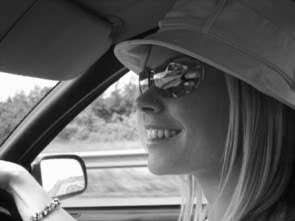 Some of my eagle-eyed friends spotted this new song when I threw it onto the blog last Saturday, even though I dated it a few months back so that it would be buried.


I didn't want to put it too prominently online before I knew that @Cherrymorello wouldn't mind - I think she quite liked it actually so now I'm putting today's date on and pushing it to the front.

In truth, I'm quite pleased with it myself and I think the story behind it illustrates something about the nature of Twitter and inspiration - though God knows what that might be.

@cherrymorello is one of the many super people I chat to on Twitter. She's lovely and great fun. Last Saturday I noticed she had a new picture up (that's the one at the top there) so I said, 'Nice picture'. (It was deep, I know, but that's how I tend to roll).

She replied, 'Which one?' There's different pictures depending on where you look at my account."

I said, "You're driving a vehicle, there's a car, you're smiling. Christ, I think there might be a poem in this..."

She said, "That Poem's called 'On my way to Glasto with the offspring in the back'"

And that got me thinking - it's a good line for a song, isn't it?

So that's the song down below. Silly, yeah, but it came out of a Twitter chat with a nice person. I like it when things like that happen.

This year has been pure hellish
Thought it was never gonna end
I was left without a sunbeam, I was lost without a friend
But I don’t want to paint it badly
‘Cos now I’m back on track
I’m on my way to Glasto with my offspring in the back

We’ll see Blur, Nick Cave and Tom Jones
The best in all the land
We’ll see steam rise off Bruce Stringsteen
And his mates the E Street Band
We’ll eat couscous, rice and lentils
And there won’t be no Big Mac
I’m on my way to Glasto with my offspring in the back

So behave yourself dear kiddies
Don’t shed another tear
The answer to your whining
Is, Yes, we’re nearly there
It’s been a lengthy journey
But I can take your flack
Cos I’m on my way to Glasto with my offspring in the back

Ken, you have warmed my cockles! After a particularly trying week (and yes, it's still trying, let's call it a persevering week) you've brought a big smile to my face. MUCH appreciated xxxx @cherrymorello

But that song ROCKS, it gave me the biggest smile! --and left me wishing I was going to Glastonbury too LOL. God I miss the festivals, and haven't been for years.

And for the kona at Sstony RIver I must say, Lentils are a delicious and nutrious part of any hippie infested festival,okay? ;D

Why am I hearing a country and western voice singing this?

Has this been on before? I like it.
I have a song/poem up now too.
x

Haha! Love it! You written the toon yet?

Anon: :) Warming cockles is all part of the service. Glad you liked it.

Susan: Lentils have a bad press but put em in a curry, a Daal for instance, or a bit of Houmus and Bob's your uncle. :)

Aerte: If we work together on Susan, we may yet succeed in getting a lentil into her. Emmm...

Rachel: Oddly enough, this is new. :)

Luce: Funny you should say. I wrote it without a tune in mind but shortly after finishing it, I thought I knew a tune that fitted it. It's not ideal, perhaps, but it does work. It's the chorus of Heart Attack and Vine by Tom Waits. You have to wait (geddit) for the chorus which starts 'Boney's high on China White, shorty's found a punk.)

Okay this is weird, but like Jim, I "heard" is sung as a country song.

Soon as I figure out why my speakers are whispering instead of speaking [all of a sudden and no, I didn't touch the volume control] I'll check out your link.