The Boy with 'The Girl with the Dragon Tattoo' 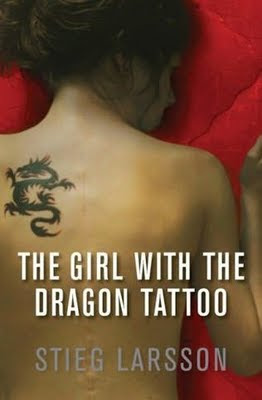 One of my great treats is the holding a new unread book in my hand and knowing that it has been recommended to me as a bloody good read.

It helps even more if the book is a bit weighty and has a brace of exultant reviews on the front pages. I’m a slut like that.

I had recently drifted away from the Castlebar Book Club and their books for some months. This was mostly because I couldn’t get to the monthly meeting on Tuesday evenings. Also, for some reason, some of the more recent book choices didn’t appeal.


Last month though, somebody from the club met me and said, “You have to read this month’s selection, it’s right up your street.” So I did. I got a copy from the library, shiny and new (what a great book club and library we have!) and I laid into it with anticipation.

The book introduces us to two memorable characters, as well as a positive slew of others. Mikael ‘Kalle’ Blomkvist is a disgraced journalist who is facing a prison sentence for an apparently misguided article he published. While in professional limbo, he is approached by powerful industrialist Henrik Vanger to investigate the mysterious disappearance of his great-niece some forty years before. He accepts and moves to live on the island where Vanger and his eccecntic extended family live in isolated mutual mistrust.

Phew. I hate exposition, don’t you?

All this takes a while to set up. The novel starts out with one hundred or so pages of journalistic shenanigans which is rather hard to digest. It then quickly morphs into a rather classic closed room murder-mystery-style affair before finishing up as something else again altogether.

The saving grace of all this rather po-faced nonsense is the enigmatic central character Lisbeth Salander – the eponymous gal with the tattoo. Both Blomkvist and Salander are extremely well-formed characters but it is Salander who holds the reader's interest best. She is a skinny slight girl with punk sensibilities and an aptitude for computer hacking and relentless investigation. Branded as anti-social and psychologically damaged, she is a law unto herself, a closed book to the world and an extremely poor enemy to make.

Through a convoluted chain of events, these two characters pair up to solve the mystery and, for all its political and social aspirations, that’s exactly what we are looking at here – a rattling old whodunnit.

The book is a good read. The story is fun and engaging if a tad improbable and the myriad of characters are quirky and sometimes challenging.

But there is no doubt at all that Salander is the pearl in this flashy oyster.

The author, Larsson, writes her with intimacy and genuine affection. I can’t help but be reminded of Ian Fleming’s James Bond who, for all his adventuring and tight-spots, was a character who we came to know by the facts of his everyday living - how he liked his eggs, how he shaved, how he showered and, yes, even what drink he liked.

Larsson does the same thing with his two central characters. We get to know them intimately by the food they prepare for themselves, the novels they read, the walks they take, how they like their coffee - and the result is a pair of engaging characters, one perhaps forgettable-with-time, the other possibly unforgettable.

The second book of the trilogy, ‘The Girl Who Played with Fire’ is more Salander orientated. She becomes even more ‘Bond-like’. Money is no longer an object, resources are plentiful, she is independent, unleashed and yes there is even an exotic location thrown in. For me, this second book seems more diffuse than the first but it was still an entertaining read.

Verdict? If you like crime and fancy something a little off the beaten track – and you can handle a large cast of characters and don’t mind a little sexual quirkiness along then way – well then you could do a lot worse that reading ‘The Girl With the Dragon Tattoo’.

… I nearly wrote, “You could do worse than making a date with…”

Please shoot me if I ever do that.

Well no duh Cbar has a great library (though why a great library fails to stock the entire Shannara series is beyond me)
I tried getting into this book but failed due to that bit of aforementioned journalistic whatchamahooey at the begining, still I trust your jugdements in books...spose I'll give it go

You do a great review - providing me with enough details (all the things I would want to know) without spoiling the read. I'll consider this one . . . maybe. Thanks.

What?! Incomplete Shannarage at the Cbar library?? tsk tsk...

Sounds like a good book then, but I love its background information even better; that it was written to simply be what it and published after its creator's death. I like good stories-behind-stories.

I'd love to belong to a book club or writer's group; never found one where I fit however. I keep trying.

Okay, I plead guilty. With all this talk of good books and second hand bookstores, rather than post on blogs, I went to Amazon.com and just made a small purchase...for now. I have an Amazon gift card on the way for the rest of my "Wish List".

And if Rambling Rachel comes by, this is partly her fault. First book I picked out was "Billy" by Pamela Connelly. The rest, however kind Sir, was your fault for making me want to find time to read...more than blogs.

With both you and Jim so good at it I am going to over-stretch my over-stretched book budget, I can see it coming.

This looks like a good read. I'll have to add it to my ever-growing reading list : D

You might also really like a book called 'Knickles and Dimes'. It has hilarious characters and a really great story. I'd recommend it!

Anyway, thanks for the review : )

Doesn't sound like my cup of Guinness, but that's okay. I still say you need to pick up Twilight.

I like the title. I'd only get a dragon tattoo if I ever decided to endure the pain and get a tattoo. I even have my design, one I made myself in ASCII art.

Hrmmm.Well as anyone should know, I love a good mystery. I will see if I can find that one on this side of the pond.

Thanks for the tip :)

I like mystery stories too and psychological trailers. It allows me to delve deeper into the whys.

Thanks for the heads up.I'll surely look for this book when I do donwtown to the bookstore.

Actually related to your previous post - but I thought of you right away:

This is the one of the books ive got sitting waiting to be read. absorbed in the martin beck series right now so will get to it sharpish.....

And I was looking for a new book to read! Thanks Ken!

What is my kind of thing, is Castlebar Library. I love that place! Really, I do.

If only I could read!

I finally got around to reading this book! It was wonderful. I can't wait to read the next one. It's a shame that the author died in 2004. His life and death sounds like the makings of a book in itself.