Learning to Go Away Again 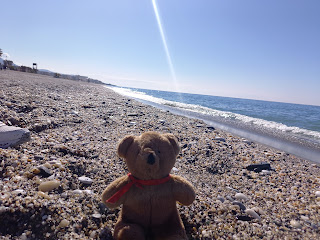 Patricia and I seemed to have forgotten about going away long before the Pandemic hit.  Having spent a year in our twenties going around the world and back, we fell into the pattern of annual holidays and trips. Then the boys showed up and, for a time, there were fewer trips. Then they were of an age where there were journeys again, weeks in the sun with pool and pizza in close proximity. All to be expected. All okay. But then there was a funny moment where the boys were a little older and there were other things and going off together didn’t seem to fit into the agenda and going off alone didn’t seem right so there was no going off at all. Then there was Covid and the going off was done anyway.

So thank heavens for lovely nieces and nephews, who see the romance and the fun in tripping off to somewhere sunny and bright to be firmly wed to the love of their lives. Thank heavens for the magnetic invite, long stuck to the fridge door, promising that all this stasis would end someday and there would be travel – there would be ‘going away’ once again.

Yes, folks, we’re just back from a week in Nerja, where Keara married her lovely fella David, and where the sunlight and the festivities just kept on coming. Where you could hardly trapse down a little alleyway without encountering a family member or a new-found friend along the way.

I won’t dwell on the wedding here except to say that it was wonderful – thank you – and that it gave me a first opportunity to explore my new permanent role at family weddings. That of the elderly relative. Of course, I’m not old. I know that. But I am of that age that seemed old when we were all getting married back in our twenties. The fifty-going-on-sixty-something uncle who is reasonably good fun but who you might not want to get stuck in an overly long conversation with. The dude who occasionally limps up to demonstrate some outmoded form of dancing to some upbeat rap tune. The guy who is allowed to sneak away and sit outside and watch the stars gently appear over the olive trees on the hills and reflect on how darned lucky he is to be there. That role. I thought I did it pretty well. Just the right balance of mischief and boring.

Nerja is interesting. It is a place for tourists to come and be gently accommodated. It is beautifully appointed with the azure sea in full display and the picturesque hills in striking backdrop. Everything is to hand. Nothing is prohibitively too far away. It is a good place to takes one’s ease for just a little while. King Alfonso XII visited in 1885 and allegedly called the view from the Mirador, ‘The Balcony of Europe’ and the name stuck. The Balcón de Europa, is the centrepiece of the town and there is always something happening out there on the promontory.

I liked Nerja, the prettiness and the convenience of it. As with everywhere I go, I am always looking for a glimpse behind the scenes of the coffee shops and ice cream parlours, the hotels and apartments and bars and leather shops. One easy glimpse was found in the church right at the centre of town. Clearly genuine and very old, it afforded a cool and a quiet place to retreat to, as well as a taste of a religious culture which is not dissimilar to our own Christian one. Except, perhaps, that the statues of the saints are more ornate and perhaps a little more belligerent. Better armed with swords and looking much more inclined to use them. The faces on the statues seem more Spanish too. I guess we tend to see ourselves in the things we chose to venerate. With fifteen minutes to kill, I watched parents and children prepare for their First Communion, reading their handwritten prayers, singing a song that involved some intricate clapping, while mothers tried to keep them in check and muscular fathers shrugged helplessly at each other.

In my quest to see the ‘Real Nerja’ behind the tiled and painted frontage, I was not disappointed by peering over the parapet on the roof of the hotel and seeing how much of the impressive central area has been constructed in front of much more humble little houses, which were only part demolished to make room for the new development. Thus, little ‘part-houses’ still nestle in behind the new walls. Frontage pulled away to make room but little back kitchens, tiles and counters and windows still remaining.

Another thing I loved about Nerja was how it ended. You didn’t have to walk very far along the beachfront before coming to a dried-up watercourse with a little wooden bridge over it and there, obviously by some strong local ordnance, the development all stopped. The hotels and forecourts and pools and pool chairs and German towels all ceased abruptly, leaving only the shorefront as it doubtless was before we tourists arrived. The brightly paved terrace becomes a dust path and the land is undeveloped run-down single storey residences which look more like makeshift sheds than houses. I loved the illusion of being out of the tourist zone, if only for a brief time. I don’t think I’m alone in being very happy to be cossetted and cotton-wool-wrapped and fed and watered for a short time but, before long, starting to crave some measure of authenticity, even if that itself is only a slightly more convincing illusion.

Yeah, get me, the rugged travelled who never ventures more than twenty minutes from his saltwater pool. Ah well, we only do what we can do.

And, by the way, the character in the photo is Teddy Beag (Small Teddy) who has travelled the world with us since 1990 and who has been everywhere. He was glad to feel the sand between his toes again.

So thank heavens for family weddings off in the sun for all kinds of reasons. One of them being that it’s awakened us, once again, to the possibilities and pleasures of going away.

Boldly going where we used to go before.

I am not a holidayer. Neither, thankfully, is Carrie. We’ve had a few weekends away—Dublin, Oban and the Lake District—but only one two-week holiday when she took me to meet her family to show them I wasn’t an axe murderer so that was less of a holiday and more of a rite of passage. My parents also never holidayed after my brother was born. Prior to that I have a vague recollection of a caravan with ducks or geese and the Blackpool illuminations and those are probably my earliest memories because I can’t have been older than four. My friends went on holiday but I never really felt I was missing out and then when I got married the first time—to a normal person who thought holidays were a thing to be expected from a husband—I thought I’d dip my toe in the water and was not impressed. Days away are fine. I like days away in fact but I also like crawling into my own bed at night. America was interesting—the poet in me liked the new experience not that he thanked me with any poems—but all I really wanted to do when I was there was visit bookshops and record stores and ended up buying stuff I could’ve bought here in the UK. (I was particularly disappointed with the poor selection of American composers.)

All the best to your niece, Ken. We've not long been back from sunny Mallorca. Nice to dip your toes in foreign seas again isn't it?

Jim - I think I could happily exist without travel, if travel went away forever but I do find, when I'm doing it, that I enjoy it quite a lot. It's mostly something *different* for a few days, something that makes the ordinary seem a but refreshed when you come back to it.

Marc - We used to go there quite a bit, to Deia. Loved it.