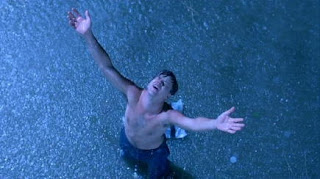 Astute readers will have noticed that I’ve not been blogging for a few weeks.

“Is this it?” some will have perhaps said, “Is he finally going to give up on this silly pointless outmoded blogging lark?” Channelling ‘Gladiator’ I will answer that by implying that it will certainly happen someday but “not yet… not yet.”

I’ve been away because a rather bad thing happened. Things are okay now, thanks. We’re back on track. Knowing me as you do, you would expect that I would probably tell you about the bad thing but, no, it’s not my story to tell. I was only a witness to it, not the actual recipient, so I don’t feel it’s my business to discuss it. Plus I don’t much feel like writing about it anyway.

So, let’s channel something else (there’ll be quite a bit of channeling today, I think). This time it’s a memorable quote from Peter Straub’s novel ‘Ghost Story; “What was the worst thing you've ever done? I won't tell you that…” In this case, I won’t tell you the worst thing that happened in the past few weeks but I’ll tell you the second worst. And, don’t worry, it’s pretty funny and at least it won’t mess you up.

Except for one thing; it was raining.

Okay, granted, it’s often raining. Drizzling or mizzling or pizzling or something second rate like that. That morning, though, it was pouring, really pouring. And I was rushing around, huffing and puffing and totally hassled. Now, looking back, I literally have no idea why I was in such a fuss. Whatever was hassling me is as nothing to me now. And that’s the lesson for the week, folks, but don’t worry, we’ll return to that at the end and drive it home a little excessively as usual.

So, yeah, it was raining. I came out of the supermarket and raced my overloaded trolley to the car as the rain drenched me. I had cereal boxes and a newspaper, all of which were rapidly turning to porridge in the deluge. I had some porridge too but, ironically, that seemed to be doing okay.

I swore. I tend to do that. Then I raced around to the back door of the little car and wrenched that door open too. The plan was simple, I would relay the bags from the shopping trolley on to the back seat of the car. It was a good plan and this is what I did. Using a movement that must have looked a little like a stevedore on a dock passing cargo from one man to the next, I swayed my bags out from the trolley and into the car.

I reached up and grabbed the edge of the boot and made an impromptu decision. I would express my dissatisfaction with this day by slamming the boot lid down as hard as I possibly could, making as much of a bang a possible, so that everyone in the town would know of my ire.

So I did. I slammed it down hard. Very hard.

I wasn’t accustomed to standing at the side of the car and slamming the boot down (hard) and, in fairness, I hadn’t reckoned it right.

And my head was in the way.

I felt a remarkable thud on the top right-hand side of my head and knew immediately what I had done.

Suddenly, rain or not, it seemed like quite a good idea that I should sit down. So I sat down on the tarmac. It didn’t seem like an imperative that I sit, it just seemed like the right thing to do.

Then, from the sitting position, it seemed like a terribly good idea to lie down. So I lay down, arms outstretched, legs akimbo.

Then I thought I must look a bit like the guy from the Shawshank Redemption, right after he escaped from the sewers, in the rain, arms outstretched to the deluge. Except he had been standing up and I was now patently lying down.

This struck me as funny so I started to laugh. I called myself a few choice names and then I struggled back to my feet.

As I leaned against the car, quietly berating myself for the fool I was (and am) a nice lady came up and offered me a tissue. I took it and put it to my head. I wasn’t surprised to see that it came away bloody, I had slammed that old boot down pretty, pretty hard.

After assuring the nice lady that I was indeed fine, I decided to make my way back into the supermarket, to use the bathroom facilities and generally clean up. On the way, I met lots of people who asked me if I was all right and I remarked to myself how thoughtful people were. After all, I was only holding a tissue up to my head, nothing particularly remarkable.

It was only when I reached the bathroom mirror that I could see why they might have been a wee bit concerned. The tissue had not done its work as well as I might have imagined. My face was an entire bloody mess. Have you seen ‘Carrie’ after the Prom? It was quite a bit like that.

All’s well that ends well. I cleaned up nicely and, three week’s later, my head is fine. But I remain the man who slammed the boot down on himself because he was rushing and racing for absolutely no reason at all.

And there’s the moral of our story again and also one final bit of channelling. I always thought that Simon and Garfunkel had one particular intention when they told us to, “slow down you move too fast, you’ve gotta let the morning last.” I thought it was just about being cool and enjoying things. But now I see that they might also have been thinking how if you don’t slow down you might not actually live to see the whole of the morning.

I'm going to try to keep that in mind.

Firstly (and just to get it out of the road) can I say I’m sorry for whatever it is you haven’t been able to write about. Privacy’s important and something I value and although they say it’s good to talk why waste all that emotion on a blog? Write a play about it in ten years once it’s been thoroughly absorbed. Or maybe not.

What I can and will say it how much your blog this week cheered me up not that I’ve been especially down but I have been exceptionally tired of late and no amount of sleep seems to be enough. But that’s neither here nor there. It wasn’t so much your blog that cheered me as it was one word: mithered. I haven’t heard that in YEARS! My mother was from the north of England and was often mithered. She and my dad had a handful of words that I’ve never heard anyone else use and not all of them dialectal. Mum is the only person I’ve even hear used the word “covetous” for example and it’s really not a word I would’ve expected to come out of her mouth because, as she was very open about, she was not a bright woman; as she often put it, “My sister was the dux of the school and I was the dunce.” My dad was the school bully but that’s another story.

As for your head all I can say (and here I’m channelling Monty Python and Terry Pratchett) is: You great pillockl!

Hi James, Sorry to hear about the tiredness. You get the sleep you need and play hard when you're awake. I don't know were I got the word 'mithered' from. It's not one I would have picked up in my home town. I must have picked it up from some of my reading, possible Peter Tinniswood, who I really liked when I was young, it might even have been good old James Herriot who I had a lot of time for when I was even younger. Regardless of where I got it, I am frequently mithered myself and no other word seems to do. As for pillock, which I heard graphically defined once, Yup that's me. :)