A Toss Up Between Love and Anger 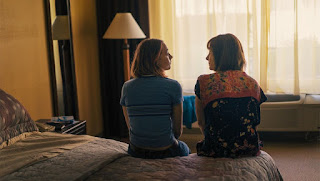 This is traditionally the week where I start to get to see the best movies of the year.

I’m not sure why, but the week preceding the Oscars seems to often be the week where I finally get paid legal access to the big award contenders, in my own home. I don’t get to the movies much anymore and I have never in my life illegally downloaded a movie to watch so I tend to exist in a sort of Limbo until I am allowed to see the puppies for myself.

This week, I have seen ‘Lady Bird’ and ‘Three Billboards…’ and I’ve got to tell you that I really liked both of them.

It seems clear to me that I can’t say anything about either of these two film that won’t already have been said a thousand times before. I liked them. They are good. You should see them. See? Nothing new.

What did strike me, having seen both of them in such close proximity, is how thematically close these two films are to each other. To my mind, at least. Perhaps nobody else has said that yet? Oh, I’m sure they have but let me give it a bash anyway. It’s Sunday and I have to be typing something.

Two completely different films but with striking similarities in their concerns.

Both films give us a set of characters, vivid and sensitively drawn, each of whom have the same problem, the same choice to make. Do they choose to love the people they love or do they give in to the almost overwhelming anger and outrage that those people evoke in them?

Love or Anger? Anger or Love?

In ‘Lady Bird’, it’s all about Family. Mother and Daughter. In ‘Three Billboards…’ it’s Community.

I don’t tend to do spoilers and I’m not going to do any here. Suffice it to say, that both films bring laughter and tears to their careful examination of this problem. The ‘turn on a sixpence’ nature of feelings of love and outrage are brilliantly and memorably depicted in both. Particularly in that scene where… but no, I won’t do that. See it yourself.

I will just say (slight spoiler) that, in one of the movies, a wine bottle, carried to a confrontation as a weapon but left there as a gift, is an apt depiction of the struggle.

Martin McDonagh has mined this territory before, in my favourite of his earlier ‘Leenane Trilogy’ plays. In ‘The Lonesome West’ two brothers fight their battles in the little house where they live together. They make a conscious decision to try to treat each other better but will love or anger ultimately prevail?

There are two things evident in each of these love/anger fables. The first is how the conflict invariably dresses itself up as a sort of a game. The parties to the game manoeuvre and play and try to trick each other into action or submission. It is like a fake battle that is in no way fake. The second evident thing is how the persons on the periphery of this battle, who may try to referee or even broker a solution, inevitably become casualties of war. Witness the priest in ‘The Lonesome West’, the Dad in ‘Ladybird, the advertising person or the co-worker in ‘Three Billboards…’

These are two good films and a good play too. ‘The Shape of Water’ seems destined for the Best Picture Oscar but I’m going to stick my neck out and say that ‘Three Billboards…’ may shade it to the post. Martin McDonagh does not have a Best Director nod (though I thought he deserved one for his adept handling of his own material and his luminescent cast). Pictures without Best Director nods don’t win Best Picture very often. Without looking it up, I think it’s only happened about four times in the past. I think it may happen tonight. If not, then this post will be out of date before twenty people will have read it. Such is life.

One other thing that both these movies have in common, for me at least. Both of them were significantly lessened in impact for me by my having viewed the trailers before I saw them. There was lots of material in the films that was not in the trailers but, time and again, I found myself going, ‘Oh, this is the bit where she says that,’ or, ‘this is bit where that must happen’. I can only imagine how much more I would have enjoyed each of these if I could have come to them fresh. We need trailers and such to get anticipation and word-of-mouth going but, man, I just need to leave them alone.

We haven’t seen either of those films yet but Three Billboards… sounds like a Carrie film and so we’ve got that pencilled-in once we get caught up on our mounting pile of detective dramas; the TiVo's nearly full and Carrie’s not planning to go back to the States before May when I can clear out all the Jimmy shows I’ve been stockpiling for the last year. When did TV become such a burden? In fact when did everything become such a burden? That’s very much how I feel just now. I mean, seriously, I’ve not even seen Blade Runner 2049 yet and back in the day I would’ve been there in the queue on the day of release. Ah, the day. God I miss the day. I’m feeling old, Ken. I mean I’ve not felt my best for a while but I’ve never actually felt old until a couple of days ago when our next door neighbour knocked on the door and asked if we needed anything from the supermarket. Anyway I went with them and stocked up but on the way back their 4x4 couldn’t make it up the hill and so it meant a relatively short trudge to the flat. Bad enough she insisted on taking one of my bags but we weren’t halfway there when she needed to take the second because I was wheezing so badly. And that was the moment I felt officially old. I guess it’s all downhill from here. Just as well because it’s clear my days of marching up hills have marched past me.

I digress. I haven’t see The Shape of Water either but I enjoyed the hell out of Pan’s Labyrinth when I finally got round to it. The two Hellboy films were okay but I can’t remember a thing about them so they can’t have been that memorable. The only other film of his I’ve seen was Mimic in the late nineties and, again, I can remember very little about it apart from a scene in a subway.

Love or anger? I don’t like to think of myself as an angry person. The last time I spent any time with a mental health professional she kept going on about my anger. I told her I wasn’t angry; I was frustrated; there is a difference. My brother was always the angry one, the kind of guy who punches holes in doors. I never got that. I still don’t. Anger feels like something you give in to. It smacks of loss of control. I can be annoyed, frustrated, irritated, thwarted even and still maintain a level of composure. Anger frightens me. Love too if I’m being honest, all the strong emotions. You’ll see this when I finally get round to sending you a copy of Left which is still with the first of its two beta readers. Hopefully by the end of the year.

I think you'll like Three Billboards. Will be interested to hear. I would say you might quite enjoy a rewatch of Hellboy as well but not the second one.

I watched 'Lady Bird' on Sunday with our daughter who is just the age of the main character (but not at all like her - much sweeter, more like the best friend). I loved the honesty in a lot of it (and was the only person in the cinema who...I'd have to say... guffawed at the dry-humping line). The brother character was a bit overlooked/half-drawn but I suppose she knew she was doing that... and I loved the Mum (Laurie Metcalf can do no wrong...) and the Dad... and lots more. There is so much I watch with my daughter where I groan and complain and say 'oh this is so superficial and plastic...' so on that level it was a good movie for us to watch together. It was simple, pretty, its heart in a good place. I can see why it didn't win Oscars though - it's really just a good teen movie, I think.
I haven't managed to see any of the other contenders yet... we still live in the sticks, to an extent (which is one place where Netflix beats cinema). I did see 'Mudbound' a while back (and cried a river...) and daughter and I have seen 'Greatest Showman' twice (once singalong, once regular). Like many of her generation she loves the songs and it is a total cheesefest but I can see why they love it... it's like a Disney cartoon (nothing real at all) and the songs are big and rousing. I would never have chosen to watch if (for me) but for her (and evidently a LOT of other young people) it is a lovely escapist trip. It is High School Musical grows up a bit and goes to the circus.

Hi Rachel You should be a movie reviewer. I like this. The wonderful thing about The Greatest Showman (which I haven't seen) is how its audience has adopted it lovingly despite all the sniffy critics. It took, like, six weeks to get to the number one spot in the box office. That's unheard-of. My young nieces *love* it.

Three Billboards... what *will* you make of it? I'm keen to know.