Some Thoughts From an Occasional Foray Into Religious Ceremonies 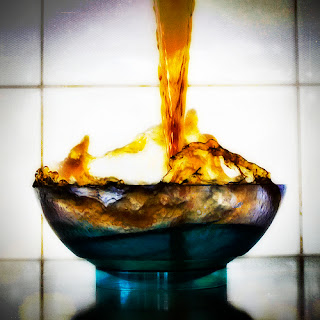 I’m not the regular Mass-goer that I once was.

And, yes, I once was. I was brought up in a good Irish Catholic family so I ‘got the t-shirt’ in that regard. For many years, through childhood, teens, and adulthood, I went to Mass weekly. I was an altar boy too, as a kid, so I am very well acquainted with the ceremony.  I could nearly say the Mass for you myself, if you were badly stuck.

But I don’t go so much any more. We can go into the reasons some other time if you wish, it’s not for today. Let’s just leave it that I don't. I do still go now and again, for various reasons.

One of those reasons is the Anniversary Masses.

Maybe you don’t know the score. If somebody dies, in the Irish Catholic community at least, they get a funeral mass as you might expect. But they also get anniversary masses, particularly if some surviving family member books them. Thus, every year, in or around the anniversary of their death, a person might have one of the daily masses dedicated to them.

This isn’t a big deal. The most that happens is that the name of person being remembered is evoked at the start of the ceremony and once or twice throughout. They are prayed-for a bit and the mass is often shared out between a number of people who might have died on the same day, albeit years apart.

And that’s what I like about it so very much. The ‘Low Keyedness’ of it.

Last Monday was Mum’s anniversary Mass. It was held in my home town so I drove there with the guys. Friends turn up for these masses, as well as family. It’s always nice to see them, before and after, and to nod to them occasionally when you catch each other’s eye as the thing is going on. It’s also quite touching that they would come, on such a miserable wintry Monday evening, to remember Mum, now seven years gone.

This year’s was especially poignant because it was the first one where Dad was not there. He was always such a solid presence to the fore of the church, staunch in his overcoat. Always far earlier to his seat than anyone ever needed to be. His loss was felt in the room by many. The mass was made poignant too by the addition of a whole new generation to the clan, as five month old Eamon beamed out at everybody from the vantage point of his portable car seat. There was a sense of comings and goings and the inevitability of the baton of life being passed on down… and not just with me, I reckon.

I like these Masses more than any other kind of Mass because the whole thing is boiled down to its most simple version. There isn’t any pomp or circumstance, no barrier between celebrant and congregation, none of the Sunday bells and whistles that can be so terribly  alienating and boring.

At its heart it feels like a meal. No, wait, it actually feels more like a tea party.  It’s quite a small room, where this Mass gets held (‘celebrated’ is the word, I know, but I choose to use ‘held’). After the readings and short sermon are over, the priest sets to, uncovering cups and washing hands and measuring out medium-sized measures of wine and tiny tiny measures of water. Afterward he will wash and shine the cup and plate right there in front of us. It’s no ceremonial wash either, he has to leave it clean for the next meal so he’s buffing away with his cloth and shining everything up. It’s really a bit like a little meal that we’ve been invited to.

The Catholic Church gets hammered these days and rightly so in many instances. It is bogged down in denial and the clinging to outmoded prejudices. It immovably defends things that are bound to righteously anger and distance many people.  It is important though, in harbouring anger and negativity towards any institution, not to be too quick to brand the plain people within with that same iron.

The people gathered in that small circular room on that Winter’s Monday evening were not fans of institutionalised-sexual-abuse. Neither were they necessarily anti-Gay or anti-Women or any of the myriad other things the institution may be righteously reviled for.

Neither was the priest preaching dogma of hate and exclusion. At this ultra-low community level, he was speaking movingly of the people he had gone to see in his day. The infirm, the sick and the dying. He spoke of their quiet fortitude with tones of respect and awe that cannot be faked. The people listen. It is their neighbours, their friends, about whom he speaks.

I saw them there, the people and the priest. They were just people. Tired, somewhat downtrodden people, by and large. Old and lonely people in many instances. Devout people in other cases. People who seek and often find a little solace and community and companionship in this meal which is shared nightly in this circular room. People who believe that there is redemption and truth and a reason for continuing to live as best they can. People who can see these things as possible only on account of the deity who they believe guides them in life and awaits to welcome them when they die.

Try not to lose sight of them, I suppose. Those plain people who reside at the bottom of every religious hierarchy. Try not to forget that they exist. In righteously attacking the crimes and the outmoded proclamations of the larger machine, spare a thought for the people who really don’t want to hate or oppress anyone. They just want to express their own faith.

Listen. We don’t know shit. Just like they don’t know shit. Nobody knows shit about what happens next. Your own belief might be so strong that you think you know - that kind of shit happens a lot on all sides. But you don’t, not really. All you’ve got, at the end of the day, is what you believe in and what you believe in is largely a choice you make as you progress through your life. No more, no less. And whatever you choose to believe, that doesn’t necessarily make you right and it doesn’t make the other guy wrong.

So let other ordinary people have their thing too. If their thing happens to hurt people then that needs to be addressed for sure. If you believe you can kill somebody then that doesn’t make you right on any moral scale. But the people at the bottom are rarely about the hurt, are they? They generally just want something to believe in and perhaps some like-minded company while they do it.

You might read this and reckon I have an agenda, that I’m playing for one of the teams. But I’m not. As I’ve said elsewhere, I find, these days, that I don’t believe in very much of anything at all.

One thing I do believe increasingly, though, is that believing in something is not such a bad thing. A little faith can help you heal yourself, it can comfort you a bit when loved ones go away and it can increase your hope in some kind of ultimate good outcome. It can be quite enviable and quite good to work yourself up into a little faith.

That might help us to keep a little balance.

When I quit my faith some sixteen years ago my issues were not with the people. These had been my brothers and sisters—in two cases literally but mostly in a spiritual sense—my uncles and aunts, my friends for almost forty years. These were people I had shared things with whose homes I’d been invited into whose children I’d played with. These were decent people and I miss them. I don’t think of them as misguided fools. Yes, of course, there were others who fell away before me, usually to chase someone of the opposite sex but occasionally for other reasons, e.g. the lure or some other shiny (and usually more tolerant) religion although I only knew one who became a Roman Catholic because, as she put it, she liked the “pomp”; we were not big on pomp. I left on point of principle and when I told them they were genuinely puzzled. I’ve just about finished a critique of a long poem about someone’s spiritual journey and although I’ve done my best the bottom line is that I’m incapable of getting it on anything other than an intellectual level. I don’t have a spiritual bone (or organ, let’s be clear about this) in my body. I can, and often do, quote scriptures to prove points or to slap people down those who have cockeyed views about what the Bible’s all about but I can no more pretend to be a spiritual man that I could pass myself off as Chinese; I don’t look like one, talk like one or—most importantly—think like one. (I remember seeing a documentary some years ago comparing eastern and western brains and there are differences.) I enjoyed the social aspects of being part of a religion which is odd because I’m really not a gregarious person and I do miss that and so I can see why you might get some comfort from these anniversary masses. I do not judge. Whatever gets you through this life, I say.

This is beautiful. Thank you.

My Mum (one of 10 and raised in Co.Armagh), will absolutely love this (as will her surviving brothers and sisters). This is lovely, Ken :)

I can really identify with your article. Most of us are just ordinary folk doing our best to live simple and honest lives without judgement and hate.

To my mind, the only justification for religion ( born and raised a catholic) is that it brings comfort to those who believe. The only person on earth who could get me into church these days would be my Mum. I've really enjoyed your posts about your Mum. I hope my boys remember me with such affection in tears to come!

True, we don't know "shit", and neither does anyone else, but that is what FAITH is for.

Liked the tolerance you spoke about here. I agree that people no matter who they are have to work out their way through life. I'm christian but completely get your views that no one knows. Reminded me of your fantastic short story from a while back about what happens when you die. That was one of the best i'd read in a long time.

You do realise how annoying it is that you write the 'religon' stuff so well on the rare ocasion that you do!
Lovely stuff Ken, you fecker! :D