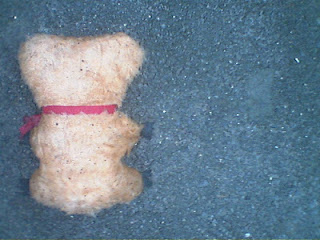 I broke that rule when I sang.

I hadn’t intended to sing. God knows, I wasn’t even sure if I would still be standing at the end, never mind singing. It was just, when the last of the thrown earth had trundled over the deep box, when the ceremony was over and people were all stood around aimlessly, suddenly bereft of convention to hide behind, it was then that it struck me. Putting him in the ground, covering him up with the earth, it was like putting him to bed. And every night, when I put him to bed and snuggled him up all nice, I sang to him.

Even his teddy, Junior, was there. Just like at bedtime. He was nestled beneath the temporary wooden cross that would have to suffice as grave-marker until the disturbed earth settled back in. Junior was in place, Peter was all covered up, it was just like bedtime.

People had been slipping away, shaking hands with each other, gently pulling back from the tableau. When I started, I could see them, in my mind’s eye at least, stopping, looking back, perhaps shaking their heads gently. They didn’t need this extra pain, there was plenty to go around already.

There was a song that always had to be sung for the bedtime routine. Heaven knows how it had been fixed upon. There had been many different songs at first but over the all-too-few years it had boiled down to that one particular oddity. It was a Bob Dylan song, ‘John Wesley Harding’. I sang it slow and easy, just like Bob did.  Peter liked how John Wesley used to ‘travel with a gun in every hand’, as if he was some kind of cowboy-octopus or something. It often made us giggly, which was not recommended as an ideal bedtime thing by the parenting manual but it worked for us. It worked real nice.

So I sang and, in doing so, I dished out more pain than I ever needed to.

I think I thought it would make me feel a little better.

Of course it didn’t.

Now Susie can’t sleep. It’s understandable, her little brother is dead. I’ve tried singing to her but it doesn’t feel right to either of us. It has never been our thing.

I go in to her room at three am and she is there, her eyes palely reflecting her tinkerbell night light.

“Is there anything I can do?”

I don’t know what to say. How can I deny that when it’s patently true?

And now there’s a storm coming.

I sit on her bed and she stares at the ceiling. We don’t speak, I just dent the edge of mattress slightly and wait for sleep to please, please come to her.

Outside it starts to rain. I can hear it beating the window pane so Susie can hear it too.

She sits up. “It’s raining,” she says softly.

Before I can think of anything to say, she has grasped my hand feverishly, “You can’t leave him there, Dad, it’s not fair.”

I try to explain. I try to tell her how he isn’t there really, that it’s just the little broken shell he has left behind, that he has gone onward and that it isn’t raining where he is now, that it never rains there. I try to tell her all this but she silences me with a mere tightening of her hand.

“I don’t mean ‘Peter-Peter’,” she whispers, “I know he’s in heaven with HolyGod, he told me so. I mean Peter-Bear. We left him out there and it’s just not fair, he’s not used to it.”

The bear was called Peter too. I had called him ‘Junior’ for years as a joke. I had forgotten his real name.

But that wasn’t ever going to do.

“Dad, listen to the rain,” we listen for a moment, “it’s pouring out there. He’ll be ruined and he’ll never forgive us. Peter doesn’t need him to be out there, not anymore, he’s gone.”

“It’s not about me. It’s about Peter Bear. He shouldn’t have to suffer just because Peter died.”

The rain isn’t as bad as it had sounded from in the bedroom but it is still bad enough. The car engine coughs and splutters like an old man unaccustomed to being awakened in the dead of night. The cemetery isn’t far. I don’t see a single person on the way.

They lock the gate at night. Kids like to drink cheap wine among the headstones in the Summer months. There’ll be no kids tonight. I have a beer crate in the boot that I wrenched from the garage and I have a piece of rope that I tied to it. I use the beer crate to help me up onto the stone wall then I pull it up by the rope and throw it over to help me get back out again. I’m a good planner, mostly.

There is only one sound at the grave. The steady pitter-pat of raindrops on cellophane wrapped bouquets.

Peter Bear has been gifted some limited shelter by the arrangement of wreaths around him but he is still damp to the touch as I lean across and pluck him up. The feel of him, the same feel as when I would present him at bedtime to be cuddled through the night, is almost too much for me to carry. It is one sense too many. Peter Bear smells of soil and damp pollen but they are not bad smells. Not at all.

As I turn to go, something draws me back.

Supposing there wasn’t anything else. Supposing all that was left of Peter was here at this sad little marker. Was there any chance at all that I taking away the only comfort that was left to him?

We say things to graves, when we stand there all alone.

“Peter,” I say, “I’m taking Junior back to Susie, because she needs him to get by, I know you’ll understand. I don’t know if there’s anything of you left here but if there is, and if you can, come into Peter Bear. Come home with me now and we will mind you there.”

The box and rope arrangement gets me out again. The grumbling car gets me home.

Susie is awake, just like I knew she would be. She sits up when I come in. She sees Peter Bear and extends her arms towards him.

“He’s a bit damp,” I tell her, “we’ll dry him out nice tonight and then you can sleep with him tomorrow. Okay?”

Her arms continue to extend, wordlessly.

I give her the bear.

She flops down and turns to the wall, the bear engulfed in her tight little embrace.

And in a matter of moments, her breathing tells me that she has gone to sleep.

I don’t know about Mongo (sorry for the esoteric reference on Facebook) but it wasn’t that sad. I was never brought up to make more of death than needs be. Yes, I was sad when my parents died—I was sat when the Mum’s cats died—but death is a part of life and I could never understand people getting into the states they did at funerals especially since they (supposedly) believed that their loved one had gone to a “better place”. I think that observation was one of the first that made me question how deeply my elders’ faiths were. Yeah, sure, shed a tear for yourself but what’s with all the falling to your knees by the graveside? Never got that. Carrie and I watched a TV programme a few days ago where an infant died—Call the Midwife—and there was a scene where the mother tucked in the her dead baby in its coffin and it was sad but I kept thinking: You’re poor and you’re going to have other kids. You need that blanket more than she (I think it was girl) does. I’m with the Klingons. When in ‘Heart of Glory’ Beverly Crusher asks Korris, "Is there any special arrangements you would like for the body?" he replies, "It is only an empty shell now, please treat it as such." I like the twist in your story though, that it’s the bear the girl is fretting over. That caught me unawares. Not sure I would’ve had the father sing two songs; I think he would’ve realised after the one that it probably wasn’t the best idea and if I was to pick one I’d go with the theme to Rainbow because of its inappropriateness.

An interesting post in terms of highlighting how we all react very uniquely to death. I wonder, though, is it a bit simplistic as it seems to suggest that the child is now okay because the teddy bear is in her arms?
Thanks for a thought-provoking piece.

Hi Jim, I came back to this, years later, and had him sing just one song. Good call.