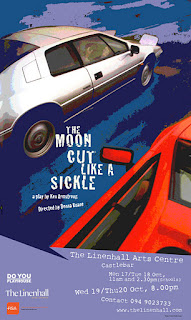 Given that this is the week when my little play 'The Moon Cut Like a Sickle' gets its third production, I thought I might just write down a little bit about it.

The full dress rehearsal is today.  It’s being filmed by Dermot Tynan of Claddagh Films, which makes me very happy then, tomorrow, we embark on a fast run of six shows at the Linenhall Arts Centre in Castlebar, all of which are now practically sold-out.

My gratitude to Do You Playhouse for reviving the play, well, it knows no bounds.  I wrote the play with them specifically in mind (more on that later) and they have delivered a remarkable new production which I really have the highest expectations for.

Donna Ruane and Oisin Herraghty are the team behind Do You Playhouse.  They are both theatre professionals who deal expertly with teen casts.  I have seen theatre everywhere and I firmly believe the work they do with teens is of the very highest standard.  Try and see them sometime.

The production also owes a huge debt of gratitude to the Road Safety Authority of Ireland who have got behind this new production of the plays with amazing enthusiasm and encouragement.

A lot of stuff fell into the writing of this play.  I wanted to write about young men and cars and driving (and girls) because I slowly moved from one side of the fence on this subject to the other as I got older and I think I can see the landscape clearly, still, from both sides.

When we were teens, we borrowed our parents cars and we finally got to understand the thrill of being able to move quickly.  Up until then we had been effectively grounded, relying on buses, bicycles or plain old walking to get us around.  The sheer novelty of propelling oneself at speed was heady and addictive.  There was also a less-tangible but possibly even-more potent aspect to finally having a car.  There was a huge amount of romance in having the ability to get away from a place whenever you wanted to.  It sounds odd, I know, but it’s true.  Being able to ‘quit this scene’ with the turn of a key brought freedom and weaved mystique around those who could do it.  Like I said, ‘less-tangible’.

Now, as an adult, I watch young guys drive cars with reckless abandon and I despair of the likelihood that they will come to harm or (much more likely) cause harm to some innocent third party.  I have seen, at close range, great damage enacted out on the road.  More than I can ever coherently speak about.  So, instead, I chose to put it into a drama.  Maybe that’s why I’m so proud of this little play, because it hurt so much.

Knowing I wanted to write about all this stuff – and do it in fairly simple terms (as I generally do), some other elements quickly fell into place.  I knew I wanted the cars to be ‘Real’ rather than mere props or imaginary references.  I have always been greatly taken with the play ‘Equus’ by Peter Shaffer and particularly the staging wherein the horses were played by actors.  So, the three cars in my play ‘Soup’ ‘Bess’ and ‘Dark Car’ are all played by girls.  This works well visually, I think, and it also plays up on the conflict and, perhaps, jealousy of the real girls regarding the boy’s infatuation with their motors.  The cars are almost like the ‘dæmons’ in the Northern Lights trilogy by Philip Pullman – moving in co-operation with their owners, inextricably joined to them.

The centre of the play is provided by lovely ‘Lysistrata’ by Aristophanes.  In that Ancient Greek play, which I saw in London back in the Eighties, the women vow to withdraw their sexual favours until their men stop going to war.  In my play, the girl's ‘kissing, hugging and general ego-boosting’ is withdrawn until the guys agree to slow down.

These things were quite deliberately added into the mix as the play was being written.  Other things seemed to appear quietly and almost without my knowing.  There are quite a number of references to ‘Grease’ in the play and the teen-testosterone and car racing elements now seem to clearly evoke ‘Rebel Without a Cause’ but this was really not deliberate.  I find that some of the many films I have watched in my life seem to poke their heads into my plays here-and-there all of their own accord.  I kind of like that.

I mentioned earlier how I wrote the play specifically for Do You Playhouse.  I had seen a number of their productions before I wrote for them, or knew them, and, in a very real sense, they lit the way for me.  I had written for teens before but I was convinced that my writing, which I always now try to make honest, was simply too adult for a teen cast to actually perform.  I couldn't, in all honestly, shy away from the bad language and sexual innuendo which were a part of my teen years (and in which I believe I was not alone).  I had a play called 'Paul's Talent' which had won an award but which had never been produced.  I was sure I needed adults pretending to be kids to be allowed to do it.  Then I saw Do You Playhouse doing 'Doghouse' by Gina Moxley and they didn't pull any punches.  It was a revelation for me.  I could write for teens as I needed to and the teens could do it.  I am grateful for this epiphany, it has coloured my writing from that day to this.

So, here we go again, into the darkened theatre.  I get nervous and I reckon I know pretty clearly when it’s 'breaking a leg' and when it’s not.  God knows, I’ve seen enough theatre both ways.  I’ve seen this play quite a few times too and, thanks to everyone involved, it has broken a leg.

My fervent wish is that we break a leg this time too. 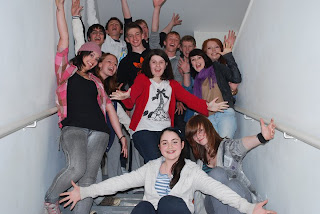 Having seen the months of preparation gone into it, I do believe we will.

I wonder if anyone has ever thought to stage Dennis Potter's Blue Remembered Hills using actual kids? I know he had a point to make using adults but it would be interesting. Time and time again I find myself bowled over by some kid who's never acted before, like David Bradley who played the boy in Kes (and who, incidentally, went on to receive good reviews in Equus some years later.)

Hi Jim, Blue Remembered Hills was much in my mind when writing 'Paul's Talent'. I kept writing things I felt kids simply could not do and consoling myself that I will find an adult cast just like Potter did.

I saw BMH again in a theatre production in recent years and it was great but I was also struck, as you mentioned, that teens could play the parts successfully in our brave new world. I agree though, that some of Potter's intent would be lost if that were done.

I wish I could be in Ireland to see. As a writer so new to sharing any of my work, I find it such a gift to read about the process of one whose work is "out there" produced. You said it is being filmed... I hope that you will put the information on your blog so we might see the film way over here, across the water.

I learn every time I get to read about another writer's life and how it has played into his or her work. Thank you for writing this. And may you break a leg. I saw Equus years ago, and found it overwhelming--and disturbing. I was too young to know what to do with the disturbing parts, but appreciated it more and more in retrospect.

Enough. I just felt like commenting this time around.

Jeanette: I'm very glad you did. Thanks. :) I hope that some of the footage we got today will seep toward YouTube over time.