There Won’t Be Blood 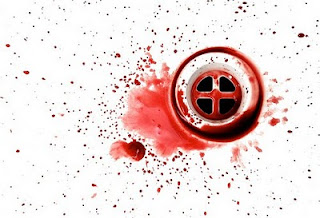 Although I am in the rudest of rude health (touch wood), I am no longer allowed to give blood.


This is a source of some sadness and disappointment for me.  I still get the letters in the post telling me that my blood is badly needed and that people are waiting for me to come and donate but, if I were to show up at their door, arm at the ready, they would turn me away.


I always found blood donation to be very good for the soul.  That old adage about it being better to give than to receive could easily have been written specifically for blood donation.  If you don’t do it – and can – I would highly recommend that you do.  It’s good for the person who needs your blood, obviously, but it’s good for you too.  Try it, you’ll see what I mean.

Although I’m of Catholic extraction, I find it hard to buy into the notion that I can undo any or all of my sins by going in a little box and telling somebody all about it.  It all seems way too easy to me.  Deep down, I can’t help but feel there needs to be some actual  ‘Reparation’ for things I’ve done wrong.  Blood donation seemed to help me with that notion.  The pinch, the sacrifice of vital fluid, the sense of giving something back by way of making good.  I dunno… it seemed to work for me, is all.

Then one day I got a letter.  My blood was no longer usable by the Irish Blood Transfusion Service.

I accept the reasons for this but I still think they are strange and a bit scary too. The reason I can’t give blood is because I lived in England between 1984 and 1997.

From November 2004, people who have spent one year or more in the UK between 1st January 1980 and 31st December 1996 are excluded from donating blood here in Ireland.  This was apparently on account of the fear that Variant Creutzfeldt-Jakob Disease (vCJD) can be transmitted through blood transfusion and that the people who were most likely to have it were the ones who ate infected meat in Britain in that time.

That’s a lot of people taken out of the blood-donation loop and I’m just one of them.

And I miss it.  I really do.  I still wear my little Pelican donor pin on my coat but it’s an ironic gesture now rather then a proud one.

And then there’s that niggling worry, irrational but present nonetheless:  If they don’t want all this badly needed blood of mine, what on earth do they know that I don’t?  Is CJD still some time bomb waiting to explode in a proportion of the millions of us who ate meat in that decade?

And, if not, are they being just a tad too careful?

I have always wanted to give blood but have never been able to as I am under the weight limit.

I understand that rule, but some of them are really bizarre. Maybe I am being really stupid here, but don't they test the blood to make sure it's okay... or maybe that isn't possible?

Just seems nuts that they turn away lots of presumably healthy blood based on someone visiting another country, or making eye contact with a gay person or something. Those are the rules right?

It can incubate in one's system for that long? Fancy that... I've given blood to my ailing father at least thrice sometime before he died. Nope, my blood donation did not hasten his death. It was meant to be. Guess, I did it because I had to. Kept me sane and feeling useful in those difficult times.

It's spooky about CJD. It reminds me of the fear we live under here in Australia for asbestos related diseases among other things.

I think we live in a 'risk averse' society and that fear and panic mongering is the order of the day, along with a generalised desire to litigate for anything and everythong.

It's counter intuitive. How many more people will die of blood supply shortages than of CJD? But still the government will err on the side of caution here and yet do next to nothing about climate change

It's a mad crazy world sometimes.

You can’t be too careful it’s said. I think you can. If you thought about all the things that could happen you’d never leave your house. And some people don’t. It’s the same with Health & Safety, a good idea but often taken to ludicrous extremes. It’s like pills. You take them into the chemist and they destroy them because you might have tampered with them, pills in sealed packets and containers. It’s like saying, “I never use public toilets in case an evil man has sat on the seat before me and I might catch his evilness.”

Maw: I suppose they are doing the right thing (in their own eyes, at least). They might say, if they tested my blood now, the thing that will strike me down in twenty years time would not yet be in evidence. I hope no one dies for the want of my pint, that's all...

Elisabeth: We have the whole Asbestos thing here now. Now that is a dreadful substance and those poor people who worked exposed to it for so long... awful really.

Jim: I agree, you *definitely* can be too careful. As for the toilet, it wouldn't be his 'evilness' that would worry me so much as the cleanliness of his bott. :)

Hmmm. Interesting. I stopped donating blood a long time ago when I realized they didn't donate my donation to the people who needed it; they sold it. Of course, I am quite irrational, so there's that. If you are now feeling sort of left out, maybe you could just donate a kidney or something. They won't pay you for that either, but you will still experience the warm feeling you miss, and you will again be part of the commercial process. Just a thought. I'm not sure what kind of lapel pins they give out for that. Take care Ken. And remember that writing in and of itself is a form of bloodletting.

Spooky. My Grandmother used to give blood cause it made her feel better when her blood pressure was high. I've never given blood. I was told I can't because I have asthma. I also drink a lot of caffeine. I think anyone getting my blood would be awake for days.

Being exposed to England does this too you Ken?

Oh my God! Well - that rules out about 1 third of the colonised world now doesn't it?!

Sorry Ken - Couldn't resist a little dig there on our colonised behalf's as it were! We too are in the same boat on this - if you've visited England in that time frame (or something very similar to it) you're not able to give blood here in Oz too.

I thought we couldn't because of our Defence Force past - but that was just a furphy.

So many things to ponder regarding your post. First, what of all the people in the England who give blood in the England? Is this a rule there, too? It would seem they should be more worried, but alas, I'm not familiar enough with either culture.

I'm sorry that you are unable to continue to donate as it sounds like it gives you a measure of peace. I'm sure you'll find another way to give back. Unfortunately, they never want my blood either--I'm anemic. :(

Hi there, I'm actually making a short documentary in London (UK) about blood donation. I'm looking for people who want to give blood but can't because they've received a transfusion since 1980. Do you know of anyone in this situation ?

Hi Kirstie: I sorry, I don't know of anyone in that circumstance. Thanks for the comment.

Thanks for getting back to me !