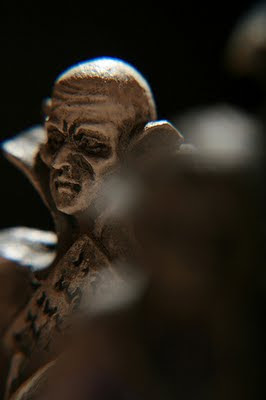 I have played chess pretty much all of my life.


I learned the moves when I was very young because my older brothers both played. I picked it up off them largely by osmosis. When I was still quite young I joined the junior chess club and when I was again too young for it, I joined the adult chess club. When I moved to London, I used to play in the West London chess club and did quite well at the type of lightning game where you have to make a move every few seconds.

I’m not by any means a brilliant player or anything like that. Perhaps you can gauge a player these days by how they do against a computer. I play the Wii Chess programme at level 3. I win some and I lose some. I draw quite a lot. That’s how I play – not special but I know a bit.

I only ever play against computers and consoles these days and less and less of even that, as time goes on. My failings at chess taunt me now.

I have come to rather fear defeat and so tend to avoid human challenges.

The point of this small post is this: I believe that you can learn a little about yourself by looking at the way you play chess (providing, of course, that you actually play chess – it doesn’t work so good if you don’t know how the pieces move).

Let’s take me as a guinea pig to illustrate the point.

Here’s how I play chess:

I tend to see quite a long way down the line. I can calculate moves and counter-moves in quite a tortuous progression so that sometimes I can put together an attack or a trap which, if it works, can be quite blindingly brilliant to behold.

But wait, this is not an exercise in self-praise, oh no. You see I have a fatal flaw. Fatal. I am always so busy plotting my little machiavellian coups and calculating my materiel exchanges ten moves ahead that, yes, I miss the glaringly obvious. I do this all the time. While I’m trying to figure out how to achieve mate in seven moves, you’ve just taken my bloody Queen off.

And that is how I am in life too. I can sometimes see a thing a little askew or progress a thought a few steps beyond the ordinary and that can look impressive. But, while I’m doing it, I will also be forgetting your name or walking into a lamp post or wondering where the hell I was meant to be going in the first place.

The way I play chess is the way I am in life.

So… how do you play chess?

That last line of yours (before the question obviously) is intriguing--I think you may be on to something.

Because I don't play chess. I know the rules and moves, I've played occasionally but with no chance of winning, though I'm always promising myself that SOMEDAY I will learn this game, sit down, study it deeply, become good at it and enjoy it. Deep inside I know it will probably never happen.

And you're right. That sums up rather neatly how I live. *sigh* Where are my pills?

I remember how to move most of the game pieces but you and I would not play well together. I don't plan more than one move ahead and even then I change my mind almost every turn.

I've never had the application to even learn the rules. And make from that what you will.

My grandfather taught me to play chess when I was nine. We used to sit for hours in his study wreathed in the blue-grey smoke from his pipe, sitting in comfortable silence either side of the onyx chess table. He owned several sets of chessmen; my favourite were the weighty gold-plated Napoleonic soldiers. Whenever I smell pipe tobacco, I'm reminded of those games.


I still play chess from time to time, but I never feel like I have to replicate those conditions. I'm happy with my scrappy old wooden pieces and folding board.

And I still play the same game I played then: thinking one, two moves ahead and reacting to the game in front of me rather than one of the multiplicities of games that this one might become. Every now and then I throw in an unexpected move, just to try and give the opposition something extra to think about.

In his prime, my grandfather was a very good player. But when I was ten, I beat him. Just the once, mind. I cornered his king with two bishops from the opposite corner of the board. He was surprised. I was gobsmacked. But it was a good win, not a fluke, and I did it all by myself.

I think I must still be the same person I was then, within all these layers of adulthood and responsibility. I react to what's right in front of me, think just a little way ahead. Sooner or later I know it'll pan out in my favour and I'll win a game.

Mind you, I walk into lamp posts too.

I can't play chess but am always up for something new. See same for approach to life.

Tonight I heard Maurice Whelan an Australian, once Irish, writer tell the story of a man who walked down the street and ran into a lampost.

He hit the post heavily and fell unconscious. When he woke up in the hospital a kindly and beautiful nurse comforted him.

Two years later when he is about to marry this same nurse, the man finds himself walking along a familiar street. He walks by the same lamppost.

He stops then and thanks me lamppost for being there.

To me chess is like this. It's all about the where, why, who and when of it.

When I was in the civil service we used to play chess during our lunch hours and I enjoyed that for a while. I was an average player who could shine occasionally but my main problem is that I'm a responder; I'm not aggressive or even proactive and I guess I'm pretty much that way in life too. I guess, and I put this forth as a reason rather than an excuse, why I've not made more of my writing and been content to shove it in drawers rather than kicking down editors' door demanding to be read.

I don't play chess any more. I don't own a chess set nor do I have a chess programme installed. I used to play Pac-Man, Tetris or Snake occasionally but when I had to reinstall my office PC I forgot about them and I've never got round to putting them back on. And I've never played even Solitaire on my laptop; when I sit here I'm working and I never have time for games.

Carrie and I have never played even a hand of cards since we met. Although I'm a defensive player I still go out to win and winning is everything. I don't understand people who play games for fun, the whole Olympic attitude that participating is enough. The hell it is. And I hate people who brake the rules – "It's just a game" – oh, no, no, no, there's not such a thing as just a game.

I'm a patzer. Occasional flashes of inspiration, I start randomly, love the middle game the most and end poorly. I do think of pieces in combinations and I am good at slipping behind the enemy line but I also repeat my techniques without learning from them.

How can you possibly say this is like life? Sheesh.

I, like you, am a planner. My family has nicknamed me "Miss Scenario". My brillian plots rarely work, because I am caught off guard!

Nope, never learned to play it. Sadly, I think it was presented to me when I was a kid as, "Well it's a boys' game really. They're more analytical than you girls and see several moves ahead."

Which is probably why Fathers get nervous when their daughters go out on dates. ;)

My dad taught me chess during several long illnesses in childhood. Later I played for the college chess club. Like you, I was brilliant at seeing my moves far ahead - my fatal flaw was that I didn't see my opponent's! I took to instinct and did better that way. I haven't played for many a long year now. Oddly, it never occurred to me to play the computer!

My family had a beautiful antique chess board with inlaid mahogany and carved ivory pieces. I used to play with it alone - I'd make the 'horses' gallop about and the king and queen would get married and have 16 pawn bridesmaids.
When I play a proper game against an opponent I start off full of enthusiasm, then I plot, then I panic, then I get furious and finally I declare it a stupid fucking game and refuse to play on.
Says it all really.

Great analogy! I'm the exact opposite. I can't see one move ahead, let alone 10. While I may live in the moment (and get your Queen), I'm losing the game because I just can plan for what's coming up.

I think you're onto something!

How do I play? I don't plan a long way ahead. I'm not systematic. I glimpse something might be possible... but planning moves ahead does my head in, so I go for it. My intuitive approach (I even like things because they form pretty patterns!) always gets me onto trouble because the possibilities on the board are so cut and dried.

And life? Let's just say I was never the type of person who keeps an alphabetical catalogue of his audio cassettes.

I think this is one of those many instances of the comments greatly adding to the value of the post. Thank you all very much.

If you don't play chess, you should look into it. The moves are easy and the possibilities endless. x

I don't play chess; chess plays me. I know the rules, understand the object of the game, and generally can hold my own. But I do find that a game of chess does reveal more about your opponent and how they approach life. Like the (trite) saying goes: It's not whether you win or lose, it's how you play the game.

[As for my opening comment, I try not to tell too much about myself during a game of chess.]

I maybe plan ahead a move or two, then see how the opposition react. Then I alter my strategy. An improviser I guess. Not saying it works mind ;)